A team usually does not change its winning combination, but Virat Kohli does not have a penchant for 'usual routes'.

A team usually does not change its winning combination, but Virat Kohli does not have a penchant for ‘usual routes’. He has made winning a habit, and is a firm believer in horses-for-courses method even if it means that the winning combination is altered. Having escaped with a draw at Rajkot, India managed to pull off a convincing win at Visakhapatnam to head to Mohali one up in the series. However, history (2012-13 and 2014) has witnessed India losing their way against England despite being in a 1-0 position. And therefore, Kohli is eyeing to shut down the door of complacency. An intense Test waits at Mohali and Suvajit Mustafi looks at India’s likely XI: FULL SCORECARD, INDIA vs ENGLAND, 3rd TEST AT MOHALI

Top-order: Despite the stiff competition for slots at the top, the opening was a concern for India at Visakhapatnam. KL Rahul expectedly made way for Gautam Gambhir, but all he managed was a 0 and 10. Murali Vijay’s hundred at Rajkot was assuring, but the three innings since read 31, 20 and 3. Cheteshwar Pujara’s good form has bailed India out, but a good start has been the major difference between India and England. The two right-handers Rahul and Vijay will open at Mohali followed by Pujara at No. 3.

Pujara now has three hundreds in his last three Tests and averages over 70 since the start of the home season with the New Zealand series. He has been India’s most consistent batsman and with him scoring at a brisk rate, India quite often find themselves at a commanding position.

Middle-order: Is the Indian side too reliant on Kohli? Yes, it has been apparent of late and without his gritty 49 not out, Rajkot was a lost Test. He followed that up with 167 and another fighting 81; this time it looked like that he was batting on a different wicket in comparison to the struggles his colleagues encountered. He is the side’s best batsman. Period.

Ajinkya Rahane’s form has been veiled with Pujara and Kohli’s splendours. He has managed 63 runs at 15.75. What is more dismal is the way he has got himself out. Prolonged slumps are not the Rahane-way. The good bit is the 188 he crafted against New Zealand at Indore only three Tests back. With five specialist batsmen the way ahead, the No. 5 spot becomes all the more important.

Test cricket’s No. 1 bowler Ravichandran Ashwin is also the top-ranked all-rounder. The effortlessness in his batting approach seems to be out of VVS Laxman’s memoirs. He will be expected to chip in with crucial runs that he has been, but his primary job will be to dismantle the English line-up with his off-spin. After an off game with the ball at Rajkot, he came back strong with a five-for at Vishakhapatnam. The last time he bowled in a Test at Mohali, he returned with match winning figures of 8 for 90. He will eye to replicate the same.

Parthiv Patel is making a return to the Test fold after more than 8 years. The athleticism of Wriddhiman Saha will be missed, be it the arch while leaving short balls or the dives to grab the blinders. Parthiv’s gritty batting in domestic cricket has made him a star, but how he keeps Ashwin and Ravindra Jadeja will hold the key here.

It was a different generation then when Parthiv first walked out in Test cricket at 17. It was in 2002, and the team was led by Sourav Ganguly with the now coach Anil Kumble a part of the squad that played in England. Still 31, as Kohli said Parthiv has a chance to cement his place as the second keeper for ‘overseas tours’.

Lower order: Any side will gleefully accept Jadeja as their No. 8 batsman. The man with three triple tons in First-Class cricket foiled England’s plans at Rajkot when he provided the much-needed support to Kohli in order to save the Test. He should be doing more with the bat at Test level, but again like Ashwin, it is the spin department where he will be expected to shine in.

The last time India played a Test at Mohali, Jadeja bagged the Man of the Match award for his match figures of 8 for 76. In the fourth innings of the Test, he dismantled the South African line-up for 109, helping India script a 108-run win against the then No. 1 side.

Jayant Yadav will retain his place. The young Haryana all-rounder had an impressive debut at Visakhapatnam. He complemented Ashwin and Jadeja, and showed good character in the lower order with the bat.

In all probability, Bhuvneshwar Kumar should come in for Umesh Yadav. He claimed two five-fors in the last two Tests he played. In morning conditions at a chilly Mohali, Bhuvi is likely to be dangerous with the swing. Inclusion of the Uttar Pradesh pacer will also ensure that the side has more depth in the batting.

The sight of Alastair Cook’s stumps breaking into two is a rare one for Indian fans. Mohammed Shami, the leader of the pace unit, has bowled with a lot of heart in unfavourable conditions and with reasonable amount of success.

The last Test at Mohali was spinner-dominated, but historically the venue has produced seamer-friendly surfaces. If that is the case, Shami will have to put his hand up. 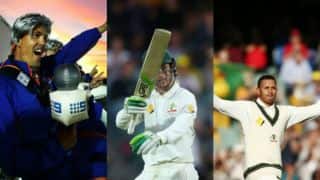