Virat Kohli has publicly welcomed back Jasprit Bumrah, but is the team's openness towards him unfair on Umesh Yadav?

Nottingham: Whiling away time when rain disrupts cricket isn t an easy task. In that sense, the Lord s Test was a tough assignment more time was spent looking out for clear weather than seeing Indian batsmen stay at the crease.

One key takeaway from that second Test though was the fitness of Jasprit Bumrah. During the umpteen rain breaks, the pacer was seen heading to the indoor nets as well as practicing in the Nursery End nets when rain relented. On one such sighting, his plaster was off the left hand.

Yes, Bumrah is fit and available. Very excited Jasprit is fit again. He is an attacking bowled who bowls good lines and lengths. He s very consistent in hitting the areas that are required at the Test level,” said an elated Virat Kohli in the pre-match press conference. “He showed that in South Africa already and he s one guy who s really aggressive in mind. He wants to take the situation front on and basically make the batsmen feel uncomfortable. That s been his biggest strength and he relishes the challenge whenever given an opportunity. We are very excited he s coming back. He s obviously a quality bowler and it s great to have someone like that in the park.”

It really doesn t take a rocket scientist to figure out that Bumrah is playing on Saturday. Who misses out though? Surely, India will go in with one spinner (R Ashwin), and it is unfathomable that Hardik Pandya s spot in the eleven is under any sort of threat. It can only be concluded that Kuldeep Yadav will miss out.

Sure, it makes sense to play Bumrah at Trent Bridge. Of all the grounds India have played or will play at during this tour, the ball does most off the pitch here. Remember, almost a month ago, India s new ball bowlers got the white-ball to do something off the wicket in the first ODI. Add some overcast conditions, and the Dukes ball to the equation, and you know that India s primary seam bowler has to play.

Bumrah s strength is to use the new ball off the deck and it will be interesting to see how he handles the Dukes cherry for the first time in his career. It also explains why Ben Stokes is back for England (ahead of Sam Curran).

He bangs the ball in hard, and gets movement off the surface. We saw that in Birmingham, as he used this quality to devastating effect against the Indian middle and lower order. Thus, bringing Bumrah will almost be a replication of what the hosts are doing. With Ishant Sharma and Mohammed Shami also adept at moving the ball off surface, it makes for a strengthened bowling line-up.

What of Umesh Yadav then? Time and again, repeatedly, he is named as the pacer who has improved most for India in the last two seasons. Yet, he is given a short stick in terms of selection. Sample this: for the South African tour, the team management had decided to play Bumrah as early as September last year. With only two spots up for grabs since then, Yadav moved down in the pecking order behind the likes of Bhuvneshwar Kumar, Ishant and Shami.

Now, the same story is being repeated here in England. The team management opted for a second spinner at Lord s, and Umesh had to sit out. It was a tad unfair, given that he bowled quite well in Birmingham (3-76 in the match). But the aforementioned seniority order played out in the second Test. It is understandable to a point, sure, but perhaps not when an injured pacer walks back into the first-choice eleven without any serious bowling under his belt.

This is the question facing India when they sit down to pick the right eleven for this third Test. Do you play Bumrah, who hasn t bowled a ball in anger since the first T20 versus Ireland on June 27 (that s seven weeks!). Or, do you play someone who is raring to go, having warmed the bench at Lord s, twiddling thumbs in near-perfect conditions for pace bowlers?

Guys who are bowling well are the ones who are going to start. That s something that everyone is aware of. I don t see any issues, said Kohli, underlining that there is no selection dilemma when it comes to the pace department.

There are two ways to look at it. One, playing Bumrah along with Ishant and Shami is obvious because the ball does a lot off the pitch and India need the shock factor here to make a comeback in this series.

The other way is to witness how Yadav s career hits stagnation on Saturday morning. 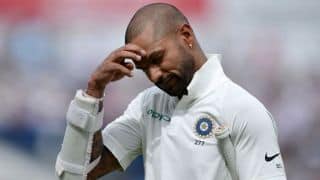