The triumphant return of Jasprit Bumrah must not go unnoticed in view of glorifying the Indian batsmen.

It took all of 17 balls for India to wrap up victory in the third Test at Trent Bridge, only their seventh in England, pulling back the deficit to 1-2 in the five-match series as Ravichandran Ashwin finished it off with the wicket of James Anderson. It capped off India s stunning rearguard, first achieved with a dogged partnership between Virat Kohli and Ajinkya Rahane on the first day, and finished off by Jasprit Bumrah s fine five-wicket haul.

India s overseas victories, though not too many, are littered with fine performances with the bat, and this was no different. Bowling performances have often been overshadowed in the past. But twin five-wicket hauls, by Hardik Pandya in the first innings and Jasprit Bumrah in the second, were significant. Much like Bhuvneshwar Kumar and Ishant Sharma s efforts at Lord s four years ago.

Before injury forced him to miss the first two Tests of the series, Bumrah s last Test had also fetched him a five-for his first against South Africa in Johannesburg earlier this year. Not many Indian fast bowlers have strung together such efforts in back-to-back games, save for their premier spinners, and it is why Bumrah s efforts must not go unnoticed in view of glorifying the batsmen.

India s agonizing 31-run defeat in the opening Test just highlighted how Kohli s team couldn t string together enough partnerships to take them through to a victory, which would have also been set up by the bowlers thanks to the efforts of Ishant and Mohammed Shami on that occasion. Except Kohli on that occasion, none of the batsmen showed the gumption or patience needed on such wickets, which they were exposed to all the more at Lord s.

In the first innings here, after being bowled out for 329, India needed their bowlers to make use of overcast conditions. Pandya s five-for was just the shot in the arm they needed, as England were bowled out inside a session. Another strong performance with the bat, with two days to play, was the cushion their bowlers needed.

Ishant has been showing his maturity as the leader of the bowling attack with great effect, as his opening wickets showed on Day 4. The stats for which bowler has swung the ball the most in a graphic that flashed across TV screens, Ishant had out-swung Anderson, Stuart Broad and Chris Woakes. It needed finishing and support from the other end, and Bumrah provided that with that added burst of pace.

Bumrah s unique bowling action has accounted for many batsmen in the past, and when a bowler can land the ball on the same spot, get one to sharply jag back in and then the next one to move away, is going to be challenging to face. The Jos Buttler–Ben Stokes stand had frustrated India for over four hours when Bumrah struck Buttler on the pads not offering a shot soon after scoring a hundred. Gone. Johnny Bairstow, easily the best England batsman on show this series but now with a broken finger, got the same ball moving away from the same length and peg his off stump back.

Bumrah s ability to bowl sharp bouncers also didn t go amiss for Michael Holding in commentary, who gushed after Woakes dismissal saying this had been the best bouncer he had seen for a long time. Bumrah s action, though unconventional, has similarities to bowlers like Courtney Walsh and Makhaya Ntini, with his ability to get the ball to leave a batsman even though it appears to be coming back in.

Bumrah appeared to have completed his five-for having Adil Rashid caught at slip, but replays showed he had overstepped, much like he did against Pakistan in the Champions Trophy final last year. The beneficiary of that life, Fakhar Zaman, went onto score a sensational century that took India out of the contest. Bumrah was on firmer ground with the added cushion of runs here, but these are the little things that bowlers must work on.

A clear differentiator in this Test match had been the catching between both teams. England grassed several chances in the slip cordon, primarily off Kohli who went onto score another 200 runs in this game, while India fared much better behind the stumps, even though they let three chances slip. KL Rahul s inclusion in the side has helped in the slip cordon as well, as he showed tremendous composure in taking tough chances off Pandya in the first innings and Bumrah in the second.

The extent of Ashwin s injury could be a factor leading up to the fourth Test at the Ageas Bowl, even though an eight-day gap augurs well for his recovery. Shami has looked good in bursts, proving to be expensive even though he has been the liveliest of the Indian bowlers on show. But after a 203-run victory, making changes are a good headache, and allows Kohli to continue his record of never repeating the same team in a Test match. 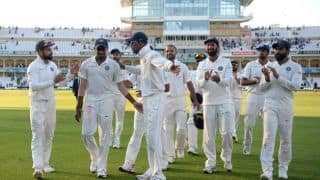 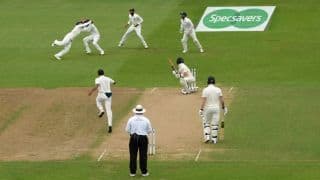