Subtract the 159-run partnership between Kohli and Rahane - India s highest on English soil since 2002 - and India could well have been bowled out before stumps.

If you appreciate the nuances of Test cricket, you will be able to look past England s decision to put India in to bat at Trent Bridge and appreciate the 159-run alliance that Virat Kohli and Ajinkya Rahane for what it represents – a display of determination and skill that came after a collapse of three wickets for 20 runs and saw out two testing displays of pace bowling when the ball was reversing sharply.

Subtract that stand between Kohli and Rahane – India s highest on English soil since Sourav Ganguly and Sachin Tendulkar put on 249 back in 2002 – and India could well have been bowled out before stumps. Detractors will crib that barring a 15-over period when Stuart Broad and Chris Woakes got the 20-overs-old ball to dart around, Kohli and Rahane prospered on a track that had little movement and that once the sun came out batting became the easiest it has this series.

It would be a disservice to India s captain and vice-captain, who in adding 159 made a huge statement and have given India genuine visions of a total big enough to bat England out of the third Test. After losing Shikhar Dhawan, KL Rahul and Cheteshwar Pujara for in eight overs before lunch, Kohli and Rahane had to first put the kicked around furniture back in place, and then there was the small matter of putting together a score from which the bowlers could dominate.

With his quick footwork and some crunching drives, Kohli brought with him an assurance that everything was under control. He was beaten early, rode one on the thigh pad and survived an lbw shout. He made it through Broad s testing second spell, pulled out two achingly gorgeous drives into the covers and worked a filthy full toss from Broad away to deep midwicket before he got to 40. It was another Kohli special, constructed from those pushed drives, elegant clips to the on-side, upright back-foot forces through cover-point and a few of those disdainful swats past square leg.

As the pitch eased out, the balls started doing less after the 40-over mark. Just before lunch, Joe Root moved third man fine and put back a long leg, and Stokes bowled a series of short balls to try and test Kohli s back and tempt him into indiscretion. Barring one needless poke, India s captain held fort. His mood was its usual, vital self, and having support at the other end was huge.

The start was shaky, with edges off Stokes flying between cover and point and wide of third slip, and another leading edge off Woakes escaping over third slip. Somehow, the inside edges and squirts past gully turned into authoritative strokes. Rahane s stride increased, and Woakes was caressed for three, James Anderson sliced past cover for four. In such shots, the self-doubt that appeared to have hampered Rahane in the first two Tests dissipated. This was not exactly the Rahane of old, but neither was it the batsman widely criticised for two sloppy dismissals at Lord s.

Though he left room for the doubters to question his aptitude with an over-confident flash at Broad in the final session, Rahane played an equal role as Kohli in putting India in position for a big total. Thus, for the first time in the series India batted a session without losing a wicket, the first century stand was formed and England were put under significant pressure.

The series needed a hard-fought day like this. England have to be tested in tougher conditions to gauge their progress from the Ashes hammering, the 0-1 loss in New Zealand and the 1-1 draw with Pakistan. And India needed a performance like this to avoid further mental disintegration; can you imagine the scars if they had been skittled for 140?

This was a bat-first surface, make no mistake. There was some cloud overhead and a bit of wind blowing across Trent Bridge when Root opted to bowl, but by no means was there exaggerated swing or seam to suggest that England s four-man pace quartet could pack off India before tea. Yes, Broad and Anderson beat the bat during the early exchanges. Yes, the toughest period to bat was between the 20th and 35th overs when Broad was getting the ball to reverse swing. Yes, Root would have hoped to prey on India s batting vulnerability as showcased at Edgbaston and Lord s.

But unfortunately for England, their quartet of fast bowlers did not hit the necessary lengths and the man they would have really loved to have on this surface, Sam Curran, had been dropped to accommodate Ben Stokes, who turned out to be the poorest on show. After allowing Dhawan to cut into the offside with glee during the morning, Stokes eased the pressure applied by Anderson and Broad, and from here India s openers marched onto add 60.

In the evening session, Stokes was also the most insistent on a review for a caught-behind decision not given in favour of England off Kohli, which proved as wasteful as Pujara s suggestion that Rahul review his lbw verdict. Then there is the matter of England dropping two catches on Saturday, to extend to 10 the number of chances fluffed this series.

All this helped India end Saturday in a very good position, and if they bat out the morning session on Sunday, their total will have turned genuinely intimidating. The forecast for day two in Nottingham is for heavier clouds, which will encourage India should Pant and the lower order score quickly in the first session. 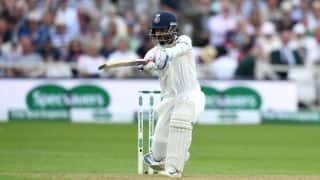 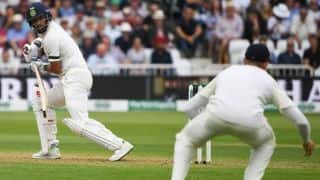