In two Tests against England, Virat Kohli has made 250 runs in four innings for an average of 60; the other specialist batsmen have managed 167.

Statistics don t always tell the whole truth, it is often cited, but neither do they lie.

In the last five years, in Test matches outside of Asia, Virat Kohli has scored the most runs: 2089 from 22 Tests, at an average of 53.56. In 40 innings, he has scored nine centuries and five half-centuries. Next best is Ajinkya Rahane with 1417 runs from 20 Tests for an average of 47.23, with four centuries and seven fifties.

In as many Tests but from two innings more, Murali Vijay has 1215 runs at 32.83 with two centuries and seven fifties. There on, the numbers dip significantly.

Cheteshwar Pujara s average from 19 Tests is 27.73. His only century came in South Africa in December 2013 and his four half-centuries are scattered between Durban 2013, Trent Bridge 2014, Adelaide 2014, and Johannesburg 2018. Shikhar Dhawan has managed 789 runs at 28.17 from 15 Tests, with one century in Auckland, 98 in Wellington and fifties in Brisbane and North Sound. KL Rahul, the other specialist batsman in India s current Test squad, has managed 431 runs in nine Tests outside of Asia at an average of 28.73, with two centuries and a fifty.

In two Tests against England, India s specialist batsmen, barring Kohli, have roundly disappointed. Kohli has made 250 runs in four innings for an average of 60. The next best returns have come from the allrounder Hardik Pandya, who in four innings has scored 90 runs. R Ashwin is third best with 85 runs. Thereon, the stats make for dismal reading.

Rahane (49), Dhawan (39), Rahul (35), Vijay (26) and Pujara (18) have combined for 167 runs. That sort of batting will not win you Test matches overseas, never mind that Kohli believes India don’t have technical shortcomings.

Each Test has thrown one batsman under the spotlight. In Birmingham, Dhawan s scores of 26 and 13 made him a marked man, while his opening partner Vijay somehow escaped heavy scrutiny. It was the manner in which Dhawan got out twice, driving at width without getting to the pitch of the deliveries, that led to experts questioning his aptitude and attitude towards batting in challenging conditions. Sure enough, Dhawan was axed for Lord s. Vijay kept his spot, Rahul moved up a spot to open and Pujara returned at India s one-drop.

Vijay had a terrible match, out for zero in both innings to Anderson. Questions are being asked about his downfall as a Test opener, and rightfully so. At Edgbaston, Vijay made 20 and 6 – lbw to left-arm quick Sam Curran in the first innings and lbw to Stuart Broad when not offering a shot.

Two ducks at Lord s have lowered Vijay s batting average in Tests outside of Asia since the beginning of 2015 to 16.53, a stark comparison to the tours of South Africa, New Zealand, England and Australia in 2013 and 2014 when he made 1000 runs in 12 Tests at an average of 41.66, with two centuries and six fifties. What ails the man who has Test centuries at Trent Bridge and Brisbane and nineties at Durban, Lord s and Adelaide?

Is it age slowing the reflexes? Is it a creaking body – he has been sidelined with wrist and back problems before – struggling to keep up with the demands of Test cricket in tough conditions? Is it a diet of docile tracks in India? Is it insecurity about his place in the team? We may never know, but the fact is that Vijay is going through a rut and is fodder for quick bowlers like Anderson and Broad on pitches where each delivery is a challenge.

Pujara s problems against the red ball this season are well documented. He struggled for Yorkshire in four-day cricket and did not find a place in India s XI at Edgbaston. He returned for the Lord s Test, ran himself out for 1, with some help from Kohli, and in the second innings did well to absorb 87 balls before playing around a lovely inswinger from Broad. He should get the nod for Trent Bridge, but will have to summon deep reserves of patience to make an impact.

Rahul s problems remain the same. A tendency to either lunge forward or hang back has seen him make 4, 13, 8 and 10. He s a quality batsman, with a century in Australia in his second Test, but Rahul needs guidance.

Rahane, a batsman with centuries in New Zealand, England, Australia and the West Indies, has been equally disappointing. In particular, a weakness outside the off stump has been tested and exposed brilliantly by England s quicks. Each of his four dismissals have been caught in the slips or by the wicketkeeper. The pattern has been the ease with which Rahane has been setup, the result being a loose waft after a sequence of testing deliveries. Elementary mistakes, on loop.

These failures point fingers to India s batting coach, Sanjay Bangar, and what role he has had in developing skills overseas. This is a man with nearly 9,500 first-class runs, who once scored 68 off 236 balls when opening in a Test in England – a Test which India won by an innings. Now, more than ever, India s batsmen need to pick Bangar s brains on that specific innings. Batting 296 minutes is what the entire Indian team is struggling to do. After Bangar departed in the 75th over of India s first innings at Headingley in 2002, Sachin Tendulkar and Sourav Ganguly bashed 193 and 128 respectively. It is precisely that type of stickability at the crease that India desperately need from their top three.

So much focus, true to any Test series in England, has been on the pitches. Edgbaston was somewhat two-paced, and England won by 31 runs. Lord s was expected to be drier, but plenty of rainfall changed it into a seaming devil on which Anderson, Broad and Chris Woakes gave India hell inside three extended days. In Nottingham, conditions are expected to once again assist the seam bowlers and with Ben Stokes not part of this Test, Woakes will be licking his lips at getting another crack at India s batsmen.

It is indeed a massive challenge that India are up against. Will someone other than Kohli resist? Its anyone s guess. 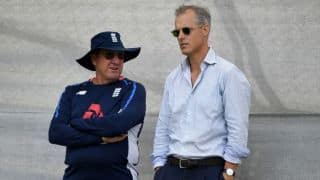