England's astonishing record of turning things around after being from precarious situations would surely keep Indians on their toes.

If India managed to get out of jail in the first Test at Rajkot, they rectified their mistakes to take a 1-0 lead in the ongoing five-match series against England at Visakhapatnam. The action now moves to Punjab Cricket Association IS Bindra Stadium (PCA), Mohali where Virat Kohli and Alastair Cook‘s men will clash for another grueling and twisted encounter. Teams often have an agenda in mind before turning up for a match and both the sides will again have different strategies to outclass each other. For the visitors, they will be raring to level the series but it will be the hosts who, despite having their nose ahead, will feel the heat. Yes, you read it right. Kohli’s troops will be expected to take an unassailable lead in the series before England adopt their come-from-behind ploy to stun India again. Full Cricket Scorecard: India vs England 3rd Test at Mohali

The rivalry between India and England has always been prominent in the rich cricketing history. It is a known fact that the game itself was introduced on Indian shores by the Englishmen (as we are all well versed with Ashutosh Gowariker’s 2001 cult classic Lagaan by now). Since then, India have unleashed some memorable performances against the “Poms”. Ajit Wadekar’s side travelled to England in 1971 to stun them in a three-Test series by 1-0. This was India’s first triumph on English soil but the icing on the cake was Kapil Dev’s side lifting the 1983 World Cup. It was a dream come true as it happened in the inventors-of-the-game’s own backyard.

The Indian cricket team have a plethora of remarkable wins over their oldest cricketing rivals. Few such wins which comes to one’s mind instantly is the 1986 Test series win (in England), 83-run win in ICC Cricket World Cup 2003 face-off, dramatic triumph in the final of Natwest Tri-Nation series 2002 and a 5-0 whitewash in a One-Day International (ODI) series in 2011. Nonetheless, it is the same team who have time and again dropped the ball out of their court in a few Test series after leading 1-0.

Where it all started-1984-85 series: England have managed to thrash India on three occasions after trailing 0-1 in a Test series. The first such instance was in 1984-85. England were on the road but still managed to stage a comeback after handing a 8-wicket win to hosts in the series opener. But as connoisseurs of cricket say, “It’s-not-over-till-its-over”, the visitors were in for a fight and improved with every outing.

David Gower’s side won the second Test by 8 wickets and drew the next one despite being in a tricky position. They took one game at a time winning the fourth Test while the last one produced no winner. Visitors won 2-1 displaying character and grit to come from behind. It is true that Englishmen play lot of Tests each year and are used to a long series consisting of five Tests. On the other hand, India have featured in only nine five-Test series till date against the same opposition (Won-3, Lost-4, Draw-2).The record is not demeaning by any standards but it shows that the visitors are more accustomed in managing their resources in a long series and are well equipped with the the art of hanging in for turnarounds.

In 2012-13, Cook-led England shocked the hosts winning the series 2-1 after conceding a victory in the first Test at Ahmedabad. India were professional in Ahmedabad winning it by 9 wickets. The hosts showed energy on the field, batted well on a batting friendly track while the tourists were still finding rhythm on the tour. Cook’s side lacked another tweaker to support in-form Graeme Swann and just then Monty Panesar chipped in.

Slowly and steadily, England’s fast bowlers exhibited control and did not leak easy runs while their spinners bowled well in tandem. If it was left-arm orthodox Panesar who applied pressure from his end, right-arm spinner Swann got enough purchase to send shivers down the throat of India’s famed batting line-up. The unique part of this pair was that they did not flight the ball much but bowled fast to shell shock the hosts. Lastly, Kevin Pietersen, Ian Bell and Cook were top performers with the willow to ensure their side had the last laugh.

India started the series on a positive note but failed to read visitors’ strategies as their performances deteriorated. Dhoni’s defensive mindset in whites only added fuel to fire as they were outclassed at home; a rare feat for the Men in Blue.

MS Dhoni‘s side came to England for a grueling five-Test series. They were certainly eyeing a revenge but were in for further embarrassment. The first Test ended in a draw as India held on with some resistance. England greeted the visitors with a green top at Lord’s but were outdone with their own ploy as India ran away with a famous 95-run win. In this way, India registered their second victory at the Mecca of cricket as pundits expected something special from them in the upcoming Tests.

Nonetheless, the script loosened for Dhoni’s men who all of a sudden looked clueless and careless as we witnessed another emphatic coming-from-behind from hosts. They were thorough in the third Test as the opposition lost few crunch moments in the game. The last two Tests were no showing from the tourists as English seamers had by then come to their very best. They wreaked havoc on India’s lackluster batting line-up, thereby grabbing the series 3-1.

In the last two series’, India were one up with three Tests to go but lost steam going forward. It was as if their energy faded and was rubbed off by the opposition to leave them tattering. India kept losing key players either to injury or inconsistency as their shoulders dropped with every defeat.

In the last two Test series between these two sides, India were not the No. 1 Test team. This time they are and hence will face the heat to set things right versus England. India should be wary of history being on England’s side and will be aware of their ability to bounce back after conceding a lead. India’s approach was not so competitive as it is today. Since Kohli has taken over from his predecessor Dhoni, the think-tank has thrown more light to fitness. They will have to figure out new ideas to keep England at bay and not look clueless when challenged. India’s batting will have to stick for long and start afresh whenever they take stance.

Overall, England have a quality line-up in hand. Their spinners may not be menacing as Panesar-Swann but have troubled India on some occasions. They, for now, need characters in the team like aggressive wicketkeeper-batsman Jos Buttler and swashbuckling all-rounder Chris Woakes to take responsibility. They will also have to be patient to enforce a mistake by the hosts and get on top of them from thereon.

England’s astonishing record of turning things in their favour after being from precarious situations would surely keep Indians on their toes. Hopefully, India would not falter for the third consecutive time after leading the series 1-0 and the third Test would be a proof to this fact. 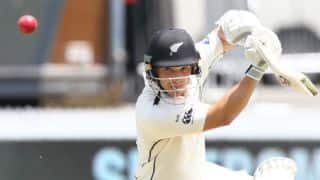