It took a little over four days for India to thrash England by an innings and 36 runs in the fourth Test at Mumbai.

It took a little over four days for India to thrash England by an innings and 36 runs in the fourth Test at Mumbai. The victory, which ensured India s first series win over England since 2008-09, was completed on the back of dominating performances with both bat and the ball. Virat Kohli starred with a record 235, which is now the highest score by an Indian captain in Test cricket. Jayant Yadav scored the first-ever century at No. 9, and was involved in a record eighth-wicket partnership of 241 runs which out-batted England from the contest. India bowled England out twice with Ravichandran Ashwin taking 12 wickets.

Once again, it was India all the way. Almost every player chipped in with crucial performances, but two of their youngest batsmen had a forgettable game. KL Rahul and Karun Nair contributed a total of 37 runs in India s total of 631 runs. Parthiv Patel, who will continue to retain his place as the wicketkeeper-batsman, made a few errors behind the wickets and scored only 15 runs. However, India will be pleased to see Murali Vijay getting back among runs with his eighth Test century third against England which primes him well for another big knock at Chennai, where the final Test will be played from December 16.

Let us take a look at how the Indian XI for the fourth Test at Mumbai fared against England:

Murali Vijay (8/10): Till this Test in his career, Vijay had gone at least five Test between his centuries. But in Mumbai, Vijay broke this trend. He had scored a century in the first Test, but Vijay flopped with the bat in the next two Tests. With England posting 400 on board in first innings, India needed Vijay to drop the anchor and others to bat around. Instead, Vijay took the bull by its horns, attacked the English spinners right from the beginning and stroked his way to a fabulous 136. His century partnership with Virat Kohli also provided India the necessary boost. Not to forget the one-handed stunner in the second England innings to remove Moeen Ali for a three-ball duck.

KL Rahul (3/10): On a flat deck that remained excellent for run-making on all five days, Rahul missed the bus by going for a mighty drive off Moeen against the spin. It resulted in the ball crashing into his wickets, sneaking between his bat and pads. Rahul looked good for a big innings after failing in the second Test before missing the first and the third. At Chennai, he will have another opportunity to have a go at England.

Cheteshwar Pujara (5/10): In India s only innings, Pujara fell for 47, on the second ball of the third day. His was a big wicket, since at that point of time India were 254 behind. Pujara shouldered his arms, but the delivery from Jake Ball nipped back in and took off his bails off on its way. En route 47, Pujara was pretty slow in scoring on Day Two evening, but looked good for yet another big score in this series.

Virat Kohli (10/10): There was hardly anything that Kohli did wrong, hence, he gets full marks. The Indian captain shattered many a records en route his 235, and finally ended the draught of a series and Test wins against England. Kohli remained ineffable, bailing India out from trouble once again, putting them in a winning position. With 640 runs in 4 Tests so far, Kohli has proven that he is beyond whatever England can conjure on this tour.

Karun Nair (3/10): The right-hander hit two good-looking boundaries signalling that something special was on the way. But Nair perished once again for cheap, missing out on making some runs early on in his career on good batting wickets. He is likely to retain his place in the side since India have lost their first-choice players in Ajinkya Rahane, Wriddhiman Saha and Mohammed Shami.

Ravichandran Ashwin (9.5/10): With 12 wickets in the Test, Ashwin surged past Bhagwat Chandrasekhar as one of the leading wicket-takers for India. Ashwin was spot-on throughout the game, claiming 6 for 112 and 6 for 55 in the two innings. Unfortunately, the star all-rounder could not do much when a flick off Joe Root saw the ball entangling into the short leg fielder Keaton Jennings.

Parthiv Patel (4/10): As a wicketkeeper, Parthiv made a few errors which could have been avoided. The senior most member of the side also created ripples when he made scathing remarks on England spinners and his Mumbai Indians teammate Jos Buttler. However, he disappointed with the bat when he was stumped off England part-timer Root for 15 in the only innings. Parthiv gets more marks because of his sharp stumping to get rid of Cook in the first innings, at a time when England were cruising at 99 without any loss.

Ravindra Jadeja (6/10): The all-rounder grabbed six wickets in the game four in the first innings and two in the second. Jadeja bowled with a lot of accuracy, and troubled the England captain in both the innings of the Mumbai Test, accounting for his priced scalp on both the occasions. With the bat, Jadeja disappointed as he fell after making 25 runs, impishly when he tried going over the top at a time when it was not needed.

Jayant Yadav (9/10): In only 3 Tests, Jayant has 221 runs at No. 9. His numbers look mighty impressive compared to India s highest run-scorer at that position Harbhajan Singh with 703 runs in 46 Tests. India are batting-heavy, and with Jayant being happy batting at that spot, there is a possibility that he will be fixated at that position for time to come. In this Test, he made the first century for India at No. 9, added a record 241 runs for the eighth wicket with Kohli. These are very early days for Jayant, but comparisons with his senior and mentor Ashwin puts him in a very good place.

When Joe Root was leading England’s fightback in the second innings, Jayant dismissed the ace Englishman for 77.

Bhuvneshwar Kumar (4/10): Bhuvneshwar s selection for this Test was a forced one. Mohammed Shami was injured and Ishant Sharma was away for his wedding. He was expected to strike early in first innings, but he could not make a breakthrough first up. However, he made it up with a first-ball dismissal of Keaton Jennings, handing the first-innings centurion a golden duck in the process.

Umesh Yadav (4/10): Not much of a game for the speedster, who was unlucky to not have dismissed Jennings early when Nair spilled a tough catch at gully. Umesh bowled a total of 14 wicketless overs in the game, and scored 7 runs. 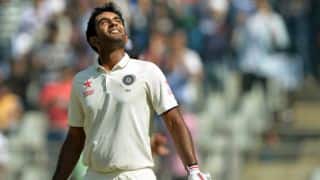 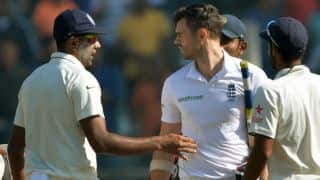