After India’s huge loss to England in the third Test at Southampton, the two teams head to Old Trafford, Manchester, with the series level 1-1. Shiamak Unwalla feels that India should play Gautam Gambhir and Ravichandran Ashwin in place of Shikhar Dhawan and Rohit Sharma in the fourth Test.

In terms of variety of strokes, Dhawan far outstrips Gambhir. Dhawan is perhaps more naturally gifted than Gambhir. But where Gambhir ranks above Dhawan is attitude. Gambhir is a scrapper. He is someone who has the ability to weather a storm and defend resolutely; he is also someone who can score quickly if the need arises, and is someone who rarely makes the same mistake twice.

Dhawan has got repeated chances in Test cricket. He has done little of note since his blistering 187 against Australia on debut. He currently averages merely 38 after 10 Tests, and has not inspired any confidence with his technique on this tour. Gambhir on the other hand, has shown on multiple occasions that he can play according to the situation. In the two practise games, he scored 54 and 21 without being dismissed.

Meanwhile, Ravichandran Ashwin has been waiting on the Test bench since December 2013. While his performances leading up to his sacking were far from impressive, his replacement — Ravindra Jadeja — has hardly done enough to merit a place ahead of Ashwin. That being said, Jadeja is likely to hold on to his spot, especially in the wake of the James Anderson “Pushgate” controversy.The Tamil Nadu off-spinner’s added value with the bat — he averages more than Dhawan after 19 Tests — has only served to strengthen his claim to make a comeback to the playing XI.

Rohit Sharma’s irresponsible shot in the first innings at Southampton was the subject of much ire from fans and experts alike. The feeling one got while watching him was that he was back to his old ways of playing attractive but brief cameos. His bowling was hardly threatening, and often presented opportunities for the opposing batsmen to score easy boundaries; so any hopes of him providing an extra spinning option have been vanquished.

The fourth Test could prove decisive for the final outcome of the series. If India manage to triumph, they will have finally exorcised the demons of 2011, and it could well herald a new age of Indian cricket. At this point, Gambhir and Ashwin seem to be the men best suited to help India achieve this goal. 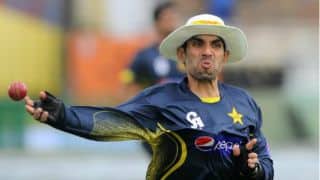 Misbah-ul-Haq becomes the oldest captain for Pakistan at 40 Greg Chappell: I enjoyed my time in India; it was a tremendous life experience