Moeen Ali's battle with the bat against Ashwin and Jadeja is expected to be a fascinating duel.

With the series trophy safely tucked away in the closet now, India will look to extend England’s misery in the limited-overs engagements by registering a win in the fifth and final One-Day International (ODI) at Headingley in Leeds. Amit Banerjee takes a look at some of the interesting clashes that could take place on the field.

Ajinkya Rahane vs James Anderson: Stark contrast is what one would observe when comparing the performances of Ajinkya Rahane and James Anderson in the fourth ODI at Edgbaston. Rahane brought up his maiden ODI century in a scintillating fashion, scoring ten fours and four sixes on his way. Anderson, on the other hand, conceded 38 runs from six overs without taking a wicket — surprising for a bowler who looked unstoppable during the Tests where he emerged as the leading wicket-taker with 25 scalps. Rahane tore into the Lancashire pacer, scoring four boundaries in an over. While the Birmingham contest was a one-sided affair, one cannot never write Anderson off in English conditions.

Moeen Ali vs Ravichandran Ashwin: The battle of the spinners is expected to be a tough fight. The previous game saw a mouth-watering contest between Moeen Ali, who picked 19 wickets during the Test series and the Indian spin-twins, Ravichandran Ashwin and Ravindra Jadeja. The latter duo were getting pummelled by Moeen’s power-fuelled hits before the crafty Ashwin managed to shatter Ali’s middle stump. The contest between them is by no means over, and one can expect some more action to happen between the the England all-rounder and the lanky Indian off-spinner on Saturday.

Suresh Raina vs Steven Finn: While the Indian southpaw has had a golden touch in the ODIs so far, Steven Finn has not performed to the team’s expectations after marking his entry into the team during the third ODI. Can Finn use his height to his advantage and stop Suresh Raina’s march with a few short ones?

Bhuvneshwar Kumar vs England openers: While the opening pair of Alastair Cook and Alex Hales had got England off to a good start in the second and third ODIs, the Meerut-born medium-pacer struck back in the fourth game by removing both the openers cheaply, reducing England to 16 for the loss of two wickets. It will be interesting to see who wins the contest in the fifth one-dayer.

Gary Ballance vs Mohammad Shami: Gary Ballance was given an opportunity in the fourth ODI after not being included in the first three games, in which he failed to make a big score. Mohammad Shami on the other hand has finally found his old touch after a tepid Test series, when he picked three wickets while conceding only 28 runs in the fourth ODI and was clinical in causing the English wickets to tumble quickly. 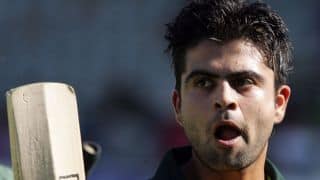