India vs England, 5th Test, Chennai: India's marks out of 10

India vs England, 5th Test, Chennai: India's marks out of 10

Top-ranked in Tests, India finish series with England bagging the Anthony de Mello trophy with four back-to-back wins. India turned the match with superlative batting and bowling after England s commendable first innings performance and broke many records during the fifth Test at the MA Chidambaram Stadium, Chepauk, Chennai. It was a team effort from the hosts that got them to the desired results but a few players claimed special mentions for their standout performances. As India win the final match with an innings and 75 runs, Paulami Chakraborty evaluates the cricketers based on their performance in the match on a scale of 0 to 10.

KL Rahul, 9/10: Rahul’s promise has been identified early and now he is delivering. Making his Test debut only in December, 2014, Rahul has already scored four centuries, three of which came on foreign soil. Rahul played an exceptional knock of 199 and shared a 152-run opening stand with Parthiv Patel which set the tone for India’s 759. He showed great maturity in his knock and anchored the innings through despite the dismissals of in-form seniors like Cheteshwar Pujara and Virat Kohli. Though Rahul has done an exemplary job with the bat, he was not at his best while fielding, spilling a couple of chances.

Parthiv Patel, 7/10: Parthiv s inclusion to the young Indian team was due to the injury of Wriddhiman Saha and the Gujarat skipper made full use of it taking up responsibilities with the bat and behind the stumps. However, the assistance a team and its skipper expect from the wicketkeeper was not properly provided by him.

One of the highlights of this series was the use of DRS and Parthiv as wicketkeeper did not make good judgment. Parthiv’s glovework was not sharp as well. However, coming in as an opener in pace of Vijay, he got his career best of 71.

Cheteshwar Pujara, 5/10: One of the most experienced and talented names of the current Indian Test side, Pujara failed to play a big knock. Rahul did not get adequate support from Pujara, who managed 16. However, he is among the curators of India s emphatic series win and his fielding efforts were commendable.

Virat Kohli, 7/10: Looking at the current form that Kohli is in, one must refrain from the idea of measuring his performance on any scale. However, it is a part of the job and he gets 7, for not scoring another 100 (as cruel as it may sound, but the player has set the benchmark that high for himself, making it a hobby to score centuries every now and then). With a brilliant show coming from new guns like Nair and Rahul, Kohli s 15 is nowhere in mention.

However, his credibility lies in his captaincy, in setting example for the youth to go out and score the runs they have and his proactive fielding.

Karun Nair, 10/10: The match will be forever remembered for his monumental 303 not out. One cannot even think of deducting a single mark from a player who has scored a triple hundred playing the third Test innings of his career. If Rahul had surprised the visitors with his 199, Nair s knock was no less than a shock to a bowling attack consisting the likes of Stuart Broad and Moeen Ali. He also took two catches.

Murali Vijay, 6/10: Though Vijay s contribution of 29 looks like a droplet in the ocean, the fact that he was not fully fit and played with an injured shoulder shows his dedication and willingness. Ravichandran Ashwin, 7/10: While the Chennai crowd cheered for every action of Ashwin, the bowler could only manage a single wicket in the final Test. But Ashwin s contributions cannot be measured by only the number of wickets he takes. Ashwin provided support to Nair, who was on way to his 303 not out, and also scored 67 crucial runs down the order. He bowled excellently, as usual, and kept the opponents under pressure that helped the other bowlers to take wickets. He also took a good catch to dismiss a set Moeen in the second innings.

Ravindra Jadeja, 9/10: If Nair was the star of Day Four, Day Five entirely belonged to Jadeja. The all-rounder made his presence felt on the ground with anything he did in the Test. He was the highest wicket-taker in the first innings with his 3 wickets. He batted alongside Nair and scored a half-century (and entertained the crowd with his trademark sword-fighting celebration afterwards). Most importantly, it was his seven-wicket haul on the final day that helped India avoid the draw the match was leading to. The one mark that is deducted?

It is to motivate him to perform even better.

Umesh Yadav, 8/10: On a tour that was expected to be dominated by the potent spinners in the side, Umesh left his mark with his attractive spell. He was capable of generating good pace consistently throughout his career but has of late emerged into one of the most disciplined bowlers and the last Test was no exception.

He did well in England s first innings and even on Day Five, he struck immediately with the second new ball. His athletic fielding was another silver-lining for India.

Ishant Sharma, 7/10: Ishant, one of the most experienced members of the squad, played up to the experience he has. There was hardly any wayward bowling and Ishant kept on bowling in the right areas with the good amount of bounce to every batsman and remained the most economical for India in the second innings. However, he remained lucky on few occasions.

Amit Mishra, 4/10: Mishra was probably the only cricketer who disappointed with his performance. He bagged just one wicket in the match, similar to Ashwin, but his bowling did not look as effective. Mishra s sloppy fielding leads to more negative points to his performance as those resulted in bonus runs for England.

His teammates have set the bar high and to match up to them, Mishra needs to up his game and most importantly his fitness, as India needs their trusted leg-spinner at his best as often as possible. 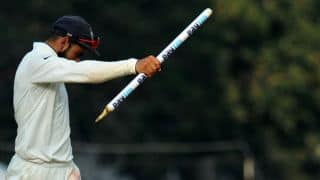 Virat Kohli: India have had a very good 2016 apart from two setbacks