The girls departed from the hall room quicker than Sarah Taylor and Shrubsole had run Shikha Pandey out. As our warden switched the lights off, I sat in front of the dead television set for a few moments. It had yet not sunk in, but India had lost.

The last wicket went down. A handful of girls and the hostel warden sighed in unison. India s fairytale journey, which everyone wanted to end the 1983 way, instead became an encore of 2003. Despite defeating England in their first match of the group stage, India lost to them at Lord s, just a step away from winning their maiden title.

Being in a profession that requires to be updated about every cricketing event, I know India have won tournaments like the Asia Cup (in fact, they have won every single edition). However, no victory can match the stature of winning a World Cup.

When the tournament had started, followers had barely expected India to qualify for the semi-finals, let alone winning it. Australia, England and New Zealand were the favourites, while South Africa were the dark horses. India had a good team that could win a few, putting up a number of impressive performances they had thought.

Mithali Raj and company showed their intent in the very first game, defeating England. They came into the tournament with a body language that oozed positivity with every step. Their journey was far from flawless, but it seemed like their mistakes were only making them better as they kept improvising.

I have often heard from my male colleagues that they relate to the men s team a lot. Most of them used to play cricket in their younger days, dreaming to become a Sachin Tendulkar or a Rahul Dravid someday before accepting their shortcomings. That is one reason among many that they are into cricket journalism.

Here is why this victory hurts that handful of girls so much. The Indian girls had found some who they had once dreamt to become.

Even when I was beyond the abilities to understand cricket properly, patriotism had found a corner in my heart. The national anthem used to give me a happy kind of goose-bumps, a lump in my throat with no reason to cry every single time when Team India sang it before the match.

I had once asked my father, who eventually introduced me to rules of cricket later, why there were no girls in the cricket team. He had told me that they play cricket as well, but they have a different team. A number of dreams had shattered after the information. My innocent mind had dreamt of wearing the blues and singing the anthem out there in future, while my parents would watch me on television with teary eyes.

But if girls too play cricket, why do not they show it on TV?

My father had no answer, but he had taken a note. The next time India hosted a tournament with the final at Kolkata, my hometown, my father took me to watch the match. However, there were mostly empty seats, unlike the men s matches where one can easily get lost in the full-house crowd.

Anjum Chopra was a name my father had told me, as she was the captain of the Indian team back then. The captain I saw grow in front of my eyes is named Mithali Raj.

She broke all records as I grew up. She taught me that there is no end to learning or self-improvement. Runs, more runs, striving for higher levels, more polishing and hours and hours of hard work took young Mithali to evolve into an experienced, composed bundle of class.

There is another name synonymous to women s cricket in India for me, that of Jhulan Goswami s. Jhulan s journey was more thrilling for me, for she belonged to the same part of the country as me. I could see my unfulfilled dreams flourish as her name frequently managed a square, a very small one, in the sports section of the daily we subscribed to.

Till the 2017 World Cup the handful of us would complain about no one giving any importance to women s cricket in India. It was different this time. People waited for the final. The final was held at Lord s. Social media was flooded with inspirational quotes, pictures and what not! One who would not follow the final was invariably left guilty: if he did not follow the match he would certainly be blamed with gender bias.

However, for that handful of us, it was not just about showing our support. As the Jhulans and Mithalis stood at Lord s singing the soulful creation of Tagore, they were representing parts of us who could not become them. Jhulan, in an interview, had hinted that this might be the last World Cup for both her and Mithali. Mithali had echoed the same thoughts. This was the last chance of our childhood heroes to etch their names in history.

Jhulan s spell reflected the hunger of leaving her own mark in what might be her last World Cup final. She saved the best for the last, bagging 3 wickets. India were on the right track. As they have done throughout the tournament, they created hopes of becoming the world champions. The target was achievable. At one point the predictor even showed India as the probable winners. I did a joy dance somewhere inside.

The second innings, however, was different. With every wicket, as the chances of India winning slipped further away, my mind found respite in spirituality and counter-jinxing. In a hushed tone, not letting the girl sitting beside me realise, I had started chanting names of the crores of Gods the world follows.

I felt like I was out there, in blues. It was my final. I could picture myself in the dugout. I desperately wanted to hug the team as they hit the winning runs.

With every falling wicket, my mind said the next one was the last hope. My mind detected even the slightest of positivity in their batting, even the tiniest of chances of England making more mistakes and keep the game on. But finally, Anya Shrubsole got her sixth wicket of the match, rattling the stumps of Rajeshwari Gayakwad. India s journey ended just 9 runs away from eternal glory .

The margin was so small that it hurt more. England made more mistakes than India in the match, but India s came in the wrong times. My mind yelled, had each of them scored a single run more than they had done No one heard.

The girls departed from the hall room quicker than Sarah Taylor and Shrubsole had run Shikha Pandey out. As our warden switched the lights off, I sat in front of the dead television set for a few moments. It had yet not sunk in, but India had lost.

The defeat hurts even more because I had followed this team during its hardships, its failures and now, when they had come toiling this long road. This tournament has certainly changed equations. People are now aware of who Harmanpreet Kaur and Deepti Sharma are. They now know that the women s team, too, has the potential to gather a full-house at Lord s on a Sunday.

But the problem is, will they again move on quickly like the girls in my hostel? Was this just because the hype created by social media that I saw many tense faces wanting those girls to lift the World Cup? Where were they when Harmanpreet played her record-breaking 171*?

There was hope each time a batter came out during India s chase. There is a similar kind of hope that says this is perhaps the turning point in the cricketing history of Indian women, when a journey to the final will inspire the mass to follow women s cricket with some interest, if not as much as their men s counterparts. 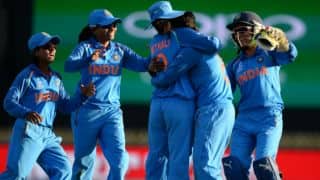