Ben Duckett has a resounding name in County season and this is his big break to cement his place for long in England s test side.

Spectators and cricket fanatics are counting days while connoisseurs of cricket are getting ready for a long Test series featuring India and England. While India are beaming in confidence ever since Virat Kohli s captaincy tenure started, England are coming to this series on the back of two drawn Test series against Pakistan and Bangladesh. No. 1 ranked India will like to get back at England against whom they have won only 2 out of their last 13 encounters. However, in a bid to continue their rampage against India, England have come out with a few new faces who can spring a surprise. Full Cricket Scorecard: India vs England 1st Test at Rajkot

For the opening slot, England have a flurry of newcomers in form of Haseeb Hameed and Ben Duckett who will have a go at India. While Hameed is yet to debut, Duckett has a better chance to play in the series opener at Rajkot. Playing in both the games of the two-Test series against Bangladesh, Duckett s fifty in the last innings has propelled his case for selection.

The Northamptonshire opener has plethora of runs across all formats in domestic cricket. At 22, Duckett got the nod ahead of Hameed against Bangladesh for being more adventurous and aggressive. With England hinting at playing Hameed with Alastair Cook (to accommodate a right-hand-left-hand combination) at the top, Duckett is likely to bat at No. 4 after Joe Root.

If we look at the numbers of the left-hander since 2013, he has been on the rise. In 2013, Duckett featured in only four games for his County side. He averaged 29 with the blade amassing 145 runs in 6 innings. But after 2014, he has been on the upward spiral. In 2015, Duckett averaged 52.73 and 58.17 in the following season. In the last two County seasons, the youngster has scored an astonishing 9 hundreds and 8 fifties to make an instant mark in front of the selectors.

Duckett is an attacking batsman who possesses a strike-rate touching 71 in First-Class and over 101 in List A. Earlier in 2016, for England Lions, he smashed an unbeaten 220 from 131 balls against Sri Lanka A. He was in sublime touch, scoring 185 and 80 against Glamorgan and followed that up with 208 against Kent. In April 2016, the southpaw smashed an unbeaten 282 not out off just 367 balls.

No doubt, Duckett is referred as a big player in English county and his records are a testimony to this fact. Despite all the hype and fame in County, India tour will be a stiff ask for the youngster to register a name in international level.

The monumental task to face spin:

Duckett s fifties in the warm-up games prior to the two-Test series against Bangladesh were pleasing. He was given a run in Tests as his twin fifties in the intense three One-Day International (ODI) series exposed his character and temperament. However, as known to all, Test matches is poles apart from ODIs and his weakness against spin cropped up in whites. As the red leather turns and zips more in the longer format, Duckett was outfoxed in each innings against Bangladesh s spinners.

If Bangladesh’s star debutant Mehedi Hasan sent him back to the pavilion on two occasions, senior pro Shakib Al Hasan got the better of him in remaining innings. With the quality of spinners present in County cricket, one can never judge the potential of a batsman against the turning ball. Duckett s scores of 14,15, 7 & 56 versus Bangladesh definitely exposed his spin woes. He did fight it out in the middle against Bangladesh s disciplined spin batteries but showed signs of uncertainty in judging the lengths of the ball. He was seen in two minds whether to come forward or play on the back foot.

If the rested pair of Ravichandran Ashwin and Ravindra Jadeja, for the ODI series against New Zealand, saw this, they must be licking their fingers to have a go at Duckett. There is no issue with his technique, he plays well against swing, can handle reverse-swing and counter attack at his own peril. But like many English players, Duckett has left enough doubts whether he will be able to stand his ground against the menacing pair of Ashwin-Jadeja.

He can refer to New Zealand s Tom Latham for some assistance who looked patient and moved his feet well on his maiden Indian tour during the three-Test series which concluded in October. In conclusion, if Duckett shows the will to stay for long, moves his feet quickly and play grounded strokes against spinners, he can ease out things for England in the middle-order. He will have to pick his moments and take charge against pacers, wherein lies his strengths, and be cautious against Ashwin-Jadeja without getting bogged down.

Duckett has a resounding name in County season but this is his big break to cement a place for long in England s test squad. If he can play like Micheal Clarke, Root or Cook did on their first tour of India, he is sure to stay for long. 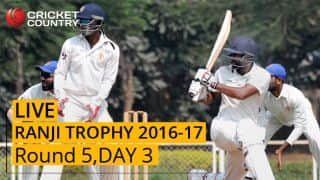