A list of the 12 finest, from the 1983 semi-final to Steven Finn's forgotten spell.

We have already listed some of the finest innings from the 96-match-old India-England ODI rivalry. While not as intensely contested as Australia-England or India-Pakistan, the matches have often produced contests. It is time to move on to the greatest spells. It may intuitively seem that the list will be dominated by Indian spinners and English fast bowlers, but these lists often have a tendency to contain surprise entries.

The two men, bowling slow-medium and off-spin, matched each other in lack of pace. The inability to score resulted in the inevitable: a desperate David Gower edged one; Allan Lamb auto-destructed in a run out; Mike Gatting bowled a slow off-cutter; and Ian Botham was bowled. Between them Mohinder and Azad had 3 for 65 from 24 overs, sealing a final berth for India.

3. Vic Marks, 10-1-35-3 at Bengaluru, 1984-85: India raced off to a quick opening stand of 70 against the English fast bowlers. Then Gower got Marks on, who immediately put on a Mohinder-Azad stranglehold on the Indians. Marks got Sunil Gavaskar soon. Gavaskar promoted Kapil in desperation, but Marks got him too, and followed that with the wicket of Dilip Vengsarkar. England won comfortably.

4. Ravi Shastri, 10-1-40-4 at Nagpur, 1984-85: India had already conceded the series 0-3, but there was still opportunity to “play for pride”. Graeme Fowler and Martyn Moxon added 70, but just like Marks, Shastri changed things. He bowled Fowler and Gatting; Gower hit one back to him; and Lamb was stumped. Shastri then added an unbeaten 37 with Sadanand Viswanath for the eighth wicket to clinch a win.

5. Chris Cowdrey, 1-0-3-1 at Chandigarh, 1984-85: The third entry from the series is a last over, like Sachin Tendulkar’s in the 1993 Hero Cup semi-final. In a sense this task was tougher than Tendulkar’s, as there was no tail-ender at the crease. The match, a 15-over contest, left India to score 8 off the last over.

Cowdrey had not bowled in the match before. He bowled Yashpal Sharma first ball. Gavaskar ran a single, but Shastri got run out disastrously. Lalchand Rajput got a single, but Gavaskar simply failed to get Cowdrey away. He scored 2 off the 4 balls he faced, and India lost by 4 runs.

6 & 7. Javagal Srinath, 9-1-41-5; Paul Jarvis, 8.4-1-35-5 at Bangalore, 1992-93: Fans had not seen an Indian fast bowler of Srinath’s pace, at least till then. There was no venom on the pitch, but it did not matter. Alec Stewart was trapped leg-before and Robin Smith was caught-behind, but the real spectacle was the one that split Gatting’s middle stump into two. He got two more wickets, but it turned out to be futile.

Chasing 248, India were 61 for 1 before Jarvis derailed them, removing Vinod Kambli, Azhar, Pravin Amre, and Kiran More, bowling to a nagging line and length. Then, when Kapil and Anil Kumble threatened to put up resistance, Jarvis got Kumble to end the threat.

8. Harbhajan Singh, 10-1-43-5 at Mumbai, 2001-02: England were 2-3 down with one match to go, and Marcus Trescothick and Nasser Hussain went after the Indians almost immediately. At 153 for 2 in 22 overs things really seemed to get out of hand. Then, after Sourav Ganguly got Hussain, Harbhajan had Graham Thorpe stumped off a wide, Trescothick caught and bowled, and broke England’s middle-order with 4 for 2 from 11 balls. Despite the spell, India eventually lost.

9. Ashish Nehra, 10-2-23-6 at Durban, 2003 World Cup: India put up a competent 250. Then Mohammad Kaif pulled off a spectacular run out, Zaheer got Trescothick, and Nehra merely ran through. Moving the ball prodigiously under lights, he got Hussain and Stewart off consecutive balls, and dismissed Michael Vaughan shortly afterwards. Shortly afterwards he threw up on the ground, ate a banana, had Paul Collingwood caught-behind, and got two more. India won by 82 runs.

10. Steve Harmison, 10-0-22-4 at Lord s, 2004: The Lord’s pitch was hard, exactly the kind on which Harmison thrived. VVS Laxman, opening batting, struggled before Harmison cleaned him up. Ganguly (90) and Rahul Dravid (52) launched a counterattack, but Harmison finished things off swiftly: he got both men, added Dinesh Karthik for good measure, and India were bowled out for 204.

11. Munaf Patel, 8-2-18-3 at Jaipur, 2006 Champions Trophy: Munaf’s first wicket on a slow, low pace was Ian Bell, leg-before. Sensing that England needed to muscle their way out, Andrew Flintoff promoted himself and Michael Yardy. Munaf got the latter; his first spell read 5-2-8-2. He added Kevin Pietersen to his tally, having him caught off the edge with the fourth ball of his sixth over. England, bowled out for 125, lost comfortably.

12. Steven Finn, 8-0-33-5 at Brisbane, 2014-15: India, Australia, and England played a forgotten triangular tournament in Australia just before the 2015 World Cup. In the third match, on a bouncy Brisbane track, Finn wrecked the Indian top-order with steep bounce. India had a cautious start, reaching 56 for 1 after 14 overs. Then Finn got his bunny Ajinkya Rahane off a poor shot, and got two balls to take off viciously to get Virat Kohli and Ambati Rayudu, taking 3 for 4 in 17 balls.

MS Dhoni and Stuart Binny got together at 67 for 5 to add 70, but Finn returned to get Dhoni with a slow bouncer and bowl Akshar Patel through the gate with consecutive deliveries. India crashed to 153 and lost comfortably. 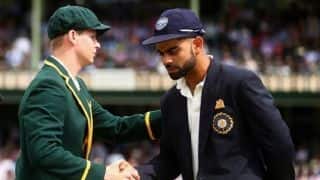 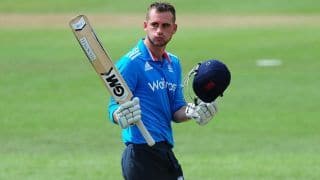