A look at the possible playing XI that England would field for the one-off T20.

India take on England in the final match, a one-off Twenty20 international at Edgbaston, in their marathon tour on Sunday. Devarchit Varma lists down the likely English playing XI to take on the Indians.

India take on England in the last match of their long tour to England. Coming off from a emphatic series win over the hosts who generally struggle in the shorter formats of the game, India would certainly be aiming to keep their winning momentum intact and return home with two of the three trophies that were there on the offering in this bilateral series. India would be playing their last match Edgbaston in Birmingham, a venue which is has plenty of support from them and where the team also enjoys a good run.

England were nothing but abject in the five-match One-Day International (ODI) series. In the past couple of years they have not had much success in the limited-overs cricket and have generally struggled, and keeping their recent form in mind, it won’t be surprising another England defeat. What the hosts need is adaptability and lot of self-belief, apart from the right playing XI combination to get the better of India. Let’s take a look at the likely English playing XI:

Alex Hales: The right-handed opening batsman is considered a specialist in this format. He had a decent outing against India and he would aim to continue the good work for his side. Hales can accelerate the innings right from the word go and his ability to hit the ball long and clean provides England an ideal opener at the top.

Jason Roy: Despite the injury scare on the day he got his maiden England call-up, Roy would be raring to go against India. He has had an excellent run in the T20 Blast in England being the highest run-scorer and having a strike-rate in excess of 150. He is a fresh face in the English camp, not bothered with the loss in the ODI series. India will have to be wary of him.

Joe Root: Not a naturally aggressive player, it is his enthusiasm and the desire to succeed in every single match makes Joe Root a compulsory selection in the English side. He smashed a century in the last ODI against India, and England will pray that he continues to score the crucial runs for them.

Eoin Morgan: Amid growing calls for him to be named England ODI captain instead of Alastair Cook, Morgan showed bit of form in the last two ODIs. He had been struggling for runs but the performances in the last two games showed a big knock may be just around the corner.

Moeen Ali: The way in which he went about his innings in both the fourth and fifth ODI proved that Moeen can be a different player all-together in the limited-overs cricket. Moeen is also blessed with the ability to scare the batsmen with his bowling, and his all-round skills make him a certainty for selection.

Ravi Bopara: There has been a lot of anguish over the non-selection of Bopara in the matches against India. Bopara has been a seasoned campaigner for England and he will be crucial for them with the ball as well.

Jos Buttler: The wicketkeeper-batsman has the ability to hit the ball long and hard, and his presence in the lower order not only adds more to England’s firepower with the bat but also a chance to scare India as they bat deep. Buttler has had a good run against India and he will be aiming to get a big knock if given an opportunity. He can bat up in the order as well.

James Tredwell: England will need a specialist spinner to keep the Indians in pressure from one end. Tredwell was more or less impressive in the ODI series and he has the ability to hit a few big strokes in the death overs.

Chris Woakes: His ability to accelerate in the death overs and also his skills with the ball makes Woakes a compulsory selection. He has played significant amount of cricket against the Indians and England will need his experience in absence of James Anderson.

Steven Finn: The lanky pacer was impressive in the opening spell of the last ODI match and he has the ability to put the Indian batsmen in pressure every now and then.

Harry Gurney: The left-arm pacer would like to keep the disappointment behind of getting only one match in the ODI series and not making an impact. Gurney can bowl with lot of discipline and England would like him to be on the top of his performance in this match. 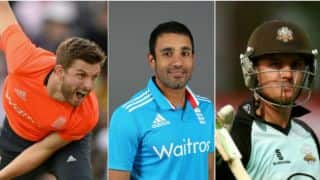 India vs England 2014, only T20I at Edgbaston: Will the T20 specialists make a difference for England?