England will need to bank on their famed superstars if they have to give India any competition in the 5-Test series who are playing under home conditions.

England after suffering a harrowing defeat in the second Test against Bangladesh at Dhaka, which enabled the hosts level the series 1-1 will now clash against a more formidable side in a long and tiring 5-Test series versus India. England batsmen in particular will be mentally scared of the dubbing that Mehedi Hasan and Shakib Al Hasan alone handed to them. England, who have perennially been a side which has struggled against good quality spinners, now will be up against a more lethal, surgical and wit-full tweekers in form of Ravichandran Ashwin, Ravindra Jadeja and Amit Mishra. Full Cricket Scorecard: India vs England 1st Test at Rajkot

Alastair Cook will again be leading the England side, his fourth tour of India and second as captain Cook. Cook carries under his belt an achievement that many captains have only dreamt about. Cook in his last tour skippered England to an emphatic 2-1 win over the men in blue. Cook would very well know that any slip-up in this series, could very well be nearing the end of his game. Cook under his leadership will have a galaxy of stars at his disposal in form of Joe Root, Jonathan Bairstow, Stuart Broad, Chris Woakes, James Anderson, Ben Stokes and Moeen Ali; who will want to topple the No.1 ranked Test side in the world.

With so much to look forward from an experienced, young and sharpened England team, lets have a read about five players who can lead their team to success.

Joe Root: England’s most talented batsmen Root will be expected to yield his bat to good use against India, after going through a lean patch in the series against Bangladesh. Root whose love-affair with Test cricket started in India in 2012, will want to make this series his own. His contemporaries like Kane Williamson and Steven Smith have struggled with the bat against the likes of Ashwin and Jadeja; which will only act as a booster for the 24-year-old. Root’s form is of paramount for England’s success and has been the case over the last few years.

Root will be closely compared to his adversary in Virat Kohli, who in home conditions will want to get the better of Root’s Test record.

Ben Stokes: Stokes has not had the best of times in playing cricket in India. Just earlier this year Stokes was left in utter disparity in the final of WT20. Stokes since then has moved on and concentrated on honing his skills than to ponder upon old stories. Stokes has not been in best of Test form in the series versus Pakistan. Stokes was monumental in the series against Bangladesh scoring crucial runs and most importantly picking wickets.

Stokes with his variation and knowledge of reversing-ball can be dangerous on Indian pitches which help such bowling. Stokes has always been England cricket’s ‘Box Office’ player and an all-round show in India can only do wonders to his status.

Stuart Broad: Broad will be under pressure to perform against India espeically with immense competition from his own counterparts like Anderson, Woakes, Steven Finn and Stokes. Broad, in the three matches he has played against India, is yet to show signs of individual brilliance which the world has been a witness off. Broad will spearhead the attack who lacks experience and knowledge of bowling on Indian conditions.

Broad is a smart customer, his expertise with reverse swing is remarkable and can go through any side; given it is his day with the ball. Broad with the bat is no rabbit, if time needed he can be a handful. India has faced Broad’s wrath and will be wary of the same.

Moeen Ali: Moeen with his under-rated spin has been a thorn in most of the Test teams around the world. Moeen has time and again proved his credentials as a quality off-spinner who gets the job done for his team i.e to get wickets at crucial junctions. This will be Moeen’s first tour to India, and he surely would be chancing his arm with spin friendly conditions on offer. Moeen was the chief artichoke of their defeat in the last time India toured England, picking up 19 wickets in at 23.00.

Moeen’s batting has always been questioned, due to his slow approach. England cannot deny that Moeen has been part of some outstanding survival or resurrection knocks for them in the recent past, which has gone unnoticed. Moeen’s ability to bat and grind in the middle under tough conditions is an art in itself. Another thing that goes in favour of Moeen is that he can marshal the lower-order batting.

Jonathan Bairstow: Bairstow in 2016, has transformed himself into a beast of a player with the bat and a more competent keeper behind the stumps. To Bairstow’s credit he is the only player to have gone past 1,000 run mark in Tests this year. Bairstow is well equipped with nimble footwork and a steady head which will only help him face Indian spinners.

Bairstow comes out to bat at No.6, which in a way steers the innings. Bairstow can also bat both ways; be aggressive or stay rooted, his ability to bat around the tail is well known.

England have a kit of players in their side, who will be eager to show to the world how eye catching and bankable they are. Zafar Ansari, Haseeb Hameed and Ben Duckett will want to take the international stage by storm. Players like Chris Woakes, Gary Ballance and Adil Rashid will want to cement their place in the Test side, with an astute and alluring show against India.

India will be a tough and challenging tour, which could very well be a last trip to the Indian shore for a few, while for many others it could be a small step towards super-stardom.

(Vishal Mehra is a reporter at CricketCountry, currently tripping on #BlackMirror and #TheFlashS03, enjoying his weekly dose of anime, monthly viewing of sitcoms, daily playing cricket once every few hours, and also venturing into table-tennis. Can be followed on Twitter @capturethecatch) 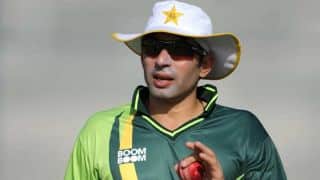