26 sixes from Murali Vijay third most sixes by any Indian opener in Tests.

Day Three of the first Test between India and England at Saurashtra Cricket Association Stadium, Rajkot began with Indian openers Murali Vijay and Gautam Gambhir at the crease with the score of 63 for no loss of wickets. Gambhir got out early in the day after scoring 29 but from there on, Vijay along with Cheteshwar Pujara added 209 runs for second wicket partnership and took India to a stronger position. Pujara was hit thrice in his helmet while trying to leave the bouncer but stayed and scored an impressive ton. He scored 124 runs, which included 17 boundaries and at a strike-rate of 60.19.

From the other end, Vijay was quite slow but he too scored a ton and also hit four sixes throughout his knock. Later, both got out and from England’s bowling department, Stuart Broad, Zafar Ansari, Ben Stokes and Adil Rashid got one wicket each. At the end of day three, India scored 319 with the loss of four wickets and with this impressive day for India, we present some interesting numbers.

3rd Test ton for Cheteshwar Pujara against England his most against a single side in Tests. Before this hundred, Pujara had two Test centuries against both New Zealand and England.

16 consecutive innings for Vijay without any hundred before this. His last hundred came against Bangladesh at Fatullah in 2015. Since then, Vijay made four fifties but couldn’t convert those into hundreds. Also, twice in those 16 innings, he got out in 40s.

25th time Gautam Gambhir dismissed via lbw in his Test career. Among the players who has played 100 or more Tests innings, Gambhir has second highest percentage of getting out via lbw 25 out total of 98 dismissals (25.51%) after Shane Watson 29 out of total of 106 dismissals (27.36%).

Partnership of 209 runs between Vijay and Pujara for 2nd wicket. Last time an Indian pair added more than 200 runs for second wicket was in 2013 against Australia at Hyderabad. 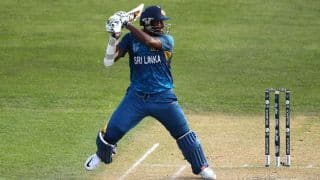