How will you remember this series? Will it go down as one dominated by England, or one wherein India fought hard but fell short of the finish line - twice.

Sitting in the Lord s pre-match conference, Virat Kohli made a statement that raised eyebrows. From the outside it looks bad, but we are playing in England which is tough conditions. Any Test we are playing, we are being competitive, he said.

1-0 down in the series, that too after the Birmingham Test see-sawed consistently, it was an odd statement. In the complete context of his press conference, Kohli spoke about cutting down on margin of error and ending on the right side of a result. In singularity, it was surprising, for how can the world s number one Test side contemplate only to be competitive?

Time and again, both the captain and coach Ravi Shastri have laid down the marker of being the best travelling side in world cricket . When the last ball was bowled in Southampton, as India went down by 60 runs, that statement became irrelevant. The score-line reads 3-1, and it has a habit of not saying too much more than that.

As cricket journalists all of you, and as cricketers, we understand that cricket is not always defined by the scorecard that s just a thing to look at. You might be 3-0 up in a five match series, and the opposition manage to win the last two and say it s a close series, but you know it s actually not close, said Kohli after the 60-run loss.

His words do ring out true. Apart from Lord s, England have not played India completely off the park, be it Birmingham or Southampton. Indeed, at Nottingham, the hosts got a real taste of India s proper prowess and were under the pump for most of this fourth Test as well. The question to ask here from an Indian perspective, is where did it all go wrong?

The answer is found in how Joe Root looks back at the series. It must have been great viewing for people at home to see the way that especially the first game and this one, how tight they’ve been, how it swung both ways. To me, it shows that Test cricket is still alive and kicking, he said after sealing the 3-1 series win.

The comparison couldn t be starker. While Kohli was busy defending his team s performances in defeat, victory allowed Root to take a more holistic view of the situation. Remember, it was so not because England outplayed India, but simply the score-line grants this freedom.

Going back seven months, sitting in the Johannesburg conference room, South African skipper too had similar words to say after his team wrapped up a 2-1 Test series win. There too, the word compete or its offshoot competitiveness was used on more than one occasion.

Again, it is easy for the winning captain to wax eloquent about how the contest attracted more Test viewers. It is left to the losing captain, in this case Kohli, to pick up the pieces. Time and again though, he has put up a brave front, underlining the fact that India have only been truly beaten in one out of seven overseas Tests in South Africa and England this year.

From Cape Town, to Centurion, to Birmingham, and to Southampton, India were always in with a chance to upset the apple cart. Nay, that is a wrong term to use, for one is talking about competitiveness. As such, let it be said here that India were only marginally away from winning the Test series in South Africa. They could have won it with smarter selection in both the first two Tests. Meanwhile, in the aforementioned latter two losses, the margin between victory and defeat oscillated between 30 and 60 runs.

It is a close one when considering the vast expanse that is Test cricket. Alternately, India won in Johannesburg by 63 runs and then in Nottingham by a massive 203 runs. In both instances, it was the sheer willpower of the team underlined by their ever-improving pace prowess to constantly etch out 20 wickets that was the cornerstone of victory.

In the end then, all that remains is a simple question. How will you remember this series? Will it go down as one dominated by England, or one wherein India fought hard but fell short of the finish line on two occasions? Whether we sit in stadiums and press boxes, or in front of television sets in our living rooms, there is a tendency to wash over the narrative and ponder over a loss.

This is how a 3-1 score-line becomes just that, and the real story of a wonderful Test series is lost in translation. 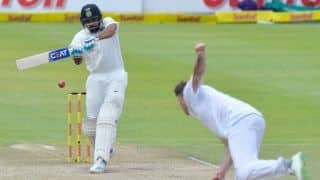