At the end of a tense game at Rajkot which had England coming very close to a surprise win, Kohli s answers to some of the questions carry great significance regarding the series.

India entered into the five-Test series against England as the more dominant side, as they had not lost any Test at home in last 3 years. They, in fact, were coming off a 3-0 hammering of New Zealand. And overall, they had done exceptionally well in the last 12 months or so. It was England, who had everything stacked up against them, as they were coming off an ordinary Test series in Bangladesh, which included a defeat. They did not have a spin attack credible enough to challenge India s might, and they needed runs. In last five days, England demolished all notions to change their perception completely, and subsequently, throwing the biggest challenge for Virat Kohli, the Indian captain. Full Cricket Scorecard: India vs England 1st Test at Rajkot

At the end of a tense game at Rajkot that had England coming very close to a surprise win, Kohli s answers to some of the questions carried great significance regarding the series. One of the biggest questions was certainly about what was India s perception of this England side: whether they were ranking the tourists high or were they expecting less fight than what they showed at Rajkot. However, showing signs of being a thinking, proactive captain who does not want his team to stray from their goals, Kohli said India did not take England for granted in the first Test, and this will remain same for the remaining four games.

Indeed, India did not take England for granted, but perhaps they did look like getting into a complacent unit, which did not take the adequate measure of Alastair Cook s team. Had India done that, their plans while bowling would have been far better than what they remained throughout the Test. The baffling use of Amit Mishra in a game, where his English counterpart Adil Rashid walked away with 7 scalps, compared to an embarrassing 3. Moreover, the rotation of bowlers resulted in England getting a lot of room to score runs.

Indian batsmen also showed a lot of nervousness in the final session. But amid the ruckus that England were able to create with a flurry of wickets, Kohli stood tall with his second highest score in Test cricket against a quality Test side. Apart from a Moeen Ali‘s delivery, which dropped short of silly point after taking Kohli s inside edge, the Indian captain looked rock solid and passed the very first test of batting with a lot of gumption to save a Test.

Kohli remained unbeaten on 49, which was a match-saving innings for India. But there is always some room for what ifs , and Kohli s embarrassing dismissal in the first innings will not be forgotten easily for a while now. A good batsman (like he is always sure about where his off-stump is), while batting against fast bowlers, is expected to know the depth of the crease when he is using it against spinners. However, Kohli faced the ignominy of walking back for 40 at a time when his team needed nothing less than a century from him.

There is no doubt in saying that England outplayed India in every aspect. England scored more runs, took more wickets, and bowled with far better plans than India. The string of missed opportunities in form of dropped catches also did not help India. And for most part of the game, India were either chasing the leather under the sun at Rajkot or were crushed under the mountain of runs that England piled up in both the innings. If this performance of England is to set the tone for Cook and his team, India and Kohli (most importantly) should be worried.

Indeed, the upcoming four Tests will suck out a lot from Kohli the captain. As a batsman, his poor record against England is against him, but the two innings in the Rajkot Test will give Kohli a lot of heart to carry on in the same passion and score even more. But as a captain, the next four Tests will leave Kohli sapless, unless England go back to being mediocre and frail in the Indian subcontinent or Kohli s team stands up to trounce their opponents, like they did to South Africa, West Indies, Sri Lanka and even New Zealand.

Frustration is a part of the game, but Kohli, who has the reputation of losing his cool at times, is something that the young captain must get some control of. Kohli is a big believer of positivity, and his state of mind must be rubbing off on the other players. There are a few senior men in the team such as Mishra, Gautam Gambhir and even Ravichandran Ashwin, who bring a very rich experience to the table and Kohli is lucky to use it for the betterment of the team.

The first Test, however disappointing it was for India, is over. As Kohli said it was a good opportunity to find out new things about your game , the next few days give India and their captain enough time to evaluate what went wrong. He also spoke about accepting what went wrong against India, which includes his use of bowlers and field placements. With runs, Kohli might have answered a few pertinent questions, but as a captain, he is set for his biggest examination till date.

England are not going to bowl like India did, and they did show that. England fielders generally catch everything that comes their way; Rajkot was one-off instance. England batsmen put highest of prices on their wickets something that they displayed in both the innings. And with the ball, England bowled better than India, which is alarming.

Kohli s team will get three full days to reach Visakhapatnam and set their house in order. Their meek performance with the ball has England s tail wagging, and the soft and unwanted strokes in the second innings of the opening Test will tell the tourists that when pressurised with a lot of runs, the Indian batsmen can crumble. Kohli will have to addresses every bit of this. He will have to talk to spinners to bowl more attacking lines just like England did and batsmen to show more character and sound judgement in shot selection. 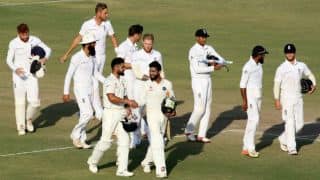 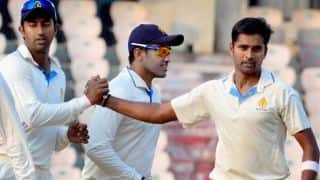