Expect a thriller, when India and New Zealand lock horns at Dharamsala in the first ODI.

After being whitewashed in the three- Test series against India, New Zealand will look for resurrection of fortunes in the five One-Day International (ODI) series, which has been their forte recently. New Zealand will lock horns with India in the first game at Dharamsala on Sunday and both the teams are looking forward to get off to a flying start. India suffered a tragic defeat when both these teams last met in the shortest format, which was the ICC World Twenty20 (WT20I) 2016. India succumbed to New Zealand s wily spin as their bowlers successfully defended a low total. India are bolstering with confidence while New Zealand will look to avenge for the Test series loss and end their campaign on a high. FULL CRICKET SCORECARD: India vs New Zealand, 1st ODI at Dharamsala

New Zealand have been one of the most dominant sides in 50-overs format and has done a good job against the white ball. They almost scripted their first win in a major event in the ICC World Cup 2015, where they lost to Australia in the finals. The team has fared well as a unit in this format and created many upsets against top teams in the recent times. They defeated the world champions Australia in their latest ODI encounter, which was also the Richard-Hadlee Trophy, by 2-1. They have a well-oiled side and the presence of impactful all-rounders gives them enough stability and options to play an extra batsman or a bowler.

With the high-voltage encounter around the corner, let s take a look at the probably XI for the Kane Williamson-led New Zealand side.

Top-order: Martin Guptill and Tom Latham will open the batting for New Zealand as they did in the Tests as well. Guptill s prowess against the white ball is well-known and can get his team to a flying start within the powerplay overs. Though he didn t enjoy a fruitful run in the Test series but one can expect him to do well in ODIs as it is a different ball game altogether.

Tom Latham, on the other hand, has done well in sporadic appearances for New Zealand so far. He played decently in the Test series and will look to do well and cement his spot in the ODIs. Latham and Guptill can form a good right hand and left hand combination for the side and add trouble on the opposition s bowlers. Considering the fact that India are not playing their full strength of bowlers, these two can get a good start.

Their skipper, Williamson will come at No. 3, where he has been instrumental for the side. He has the ability to play big and anchor the innings for long. He has been in good form in the recent times in ODIs. Williamson is a good player of spin, a factor which will add to New Zealand s advantage. The top-order wears a formidable look and if it gets going, Indian bowlers will be at sixes and sevens.

Middle-order: New Zealand s middle-order hails of Ross Taylor, Corey Anderson and Luke Ronchi. Taylor has the ability to score some brisk runs and steer his side to a commanding position. He has the ability to score big shots and will look to rediscover his mojo in this series. Corey Anderson is one of the most valuable all-rounders in the circuit and has the ability to garner quick runs. Ha has massive experience of playing in the Indian subcontinent with many games under his belt in the Indian Premier League (IPL). His presence will be of utmost importance in the line up. Luke Ronchi will bat at No. 6. Ronchi did well in the Test series and will probably keep wickets for the side.

Lower middler-order and bowling: With the presence of Jimmy Neesham, Anderson and Mitchell Santner, New Zealand have a pack of impactful all-rounder. All these players are decent with the bat and can bowl well too. Neesham s maverick approach with the bat can help New Zealand collect some priceless runs lower down the order. His success in the Indore Test is a testament to his abilities and can excel against the white ball too.

Santner bowls effective left-arm spin and is a handy batsman down the order. He makes it to the side as their frontline spinner and had a good run in the Test series as well. The other spinner to make it to the side is Ish Sodhi. New Zealand stunned India in the WT20I encounter with Sodhi and Santner being the key players. Both the spinners will hold the key for New Zealand in this series as well.

The pace battery comprises of Trent Boult and Matt Henry. Boult can swing the white ball and can create problems for the Indian top-order batsmen and is well capable of bowling in the death. In ODIs, the batsman is always looking to get runs, which makes Boult s swing crucial. Henry possesses raw pace and did a good job in Tests. Neesham and Anderson will also contribute with their medium-pace which gives New Zealand have enough variations and options.

Expect a thriller, when these two teams lock horns at Dharamsala in the first ODI. In comparison, New Zealand have a better chance with India missing out on few players due to injury while few have been rested. This will certainly boost New Zealand s confidence after having a torrid time in the longer format. 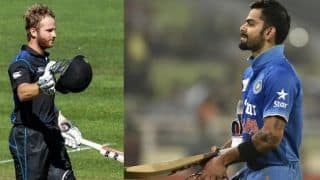