Having finished the three-Test series against New Zealand with utmost perfection, there should not be any qualms in the Indian camp to remain ruthless in the limited-overs leg.

Having finished the three-Test series against New Zealand with utmost perfection, there should not be any qualms in the Indian camp to remain ruthless in the limited-overs leg of their second home series of the big season. The stage is perfectly set for the Indians to keep battering the Kiwis, who have been bruised enough mentally as well as emotionally in the three-Test series wherein the hosts inflicted a brutal whitewash. After all, even though New Zealand lost their key bowler Tim Southee before Test series, they still remained one of the best teams to tour India in the recent times, but failed to live up to the billing. FULL CRICKET SCORECARD: India vs New Zealand, 1st ODI at Dharamsala

Even for the best of the cricket teams, it is not possible to bounce back immediately from big defeats. And moreover, New Zealand s performances in the Test series do not warrant any turnaround from where they left in the Test series an embarrassing batting collapse on a pitch that remained favourable to the batsmen. The Kiwis, however, have made a few changes in their side with the most notable addition being that of Tim Southee, a bowler who has rich experience of playing with both red and white cricket balls in India. But one or two changes, as we have seen recently in international cricket, hardly make any difference as most of the times it is about the opposition team which remains on a rampage.

The Indian cricket team, by that logic, should be expected to remain unrelenting as it is imperative that the other teams such as England, Bangladesh and Australia who are lined up to tour next, should also get the message.

The hosts may not be having all their preferred players for this series some of the key bowlers have been rested keeping in mind the journey head those who have been on the fringes have got excellent opportunities to make it count. Mandeep Singh, Manish Pandey, Jayant Yadav, Kedar Jadhav and even Hardik Pandya who is yet to make his ODI debut will want to make most of the chance which they have got against an opponent which has been left reeling by the Test side.

There are various factors for India to remain remorseless. There have not been many occasions in the Indian history where they have had chances of inflicting back-to-back whitewashes. The opposition is on its knees, and the reinforcement that has happened in the Indian side certainly makes it even tougher for the New Zealand cricket team to match. Some of the cricketers that the Indians have included in their squad have been around for a very long time, but dearth of opportunities have only kept them fired up to make most of any opportunity that comes their way.

In Mandeep, Jadhav and Pandey, India have included some heavy run-scorers who can plunder a lot of runs once settled in. Pandya has already shown the damages he can cause with rapid run-making abilities, even though his bowling remains an area of concern for the Indian cricket team. The Indians have for long searched an all-rounder who can fit in across both, long and short formats. But Ravindra Jadeja s exploits in Test cricket and the emergence of Pandya in limited-overs cricket has certainly raised India s hopes of having a few options in the all-rounders department.

New Zealand will be mistaken if they think the Indian seam attack has been diminished with Mohammed Shami being rested and Ishant Sharma and Bhuvneshwar Kumar being out of the series due to injuries. While India have retained the express pace option in Umesh Yadav, their true strength lies in the accuracy of Dhawal Kulkarni, the wiliness of Jasprit Bumrah and the spin troika of Amit Mishra, Akshar Patel and Jayant Yadav. While Mishra has been on the bench for long, it will be a test for him to make sure that there is no damage to his reputation since all the games with the white cricket ball are day-night affairs, wherein dew plays a very strong role.

The presence of Akshar and Jayant provides India further options to explore, but not a lot of experimentation can be expected, especially with MS Dhoni being around as the leader of the camp. India are likely to play two spinners at a time, and with the option of Rohit Sharma also being in their minds, there will not be a lot of changes that may be witnessed as far as the Indian spin attack is concerned.

The strongest aspect of this Indian cricket team, despite missing some of its star players, is the top-order which New Zealand cannot match at all. The rich form of the Indian top three Ajinkya Rahane, Virat Kohli and Rohit Sharma provides India the luxury of playing their fringe players in the lower-middle order. And as far as Dhoni is concerned, the Indian captain in the limited-overs format will be more than eager to finish this series on a high, as his services will not be needed in the Indian side post October 29 for the remainder of the year 2016. India will be involved in a five-Test series following the ODIs against New Zealand, and thus, Dhoni will want to put behind whatever amount of disappointment he has had so far this year.

It is important for the Indians to maintain their winning run, as the habit of achieving favourable results is likely to provide them enough fuel to meet the innumerable challenges that are going to come their way this season. The New Zealand cricket team has already been pushed on the backfoot so far enough that it will need some inspirational performances to get back on the track. Certainly, their position compared to that of India s is certainly far from comfortable.

Irrespective of the fact that India will be playing only three matches each in 50-over and T20 formats in the remainder of their season (all against England), winning is a habit which is tough to conjure. But once achieved, it will put India in another zone altogether. 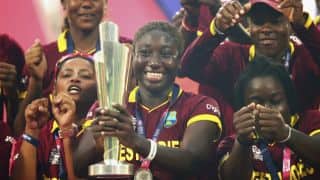