1 player has played all 6 matches between India and New Zealand. MS Dhoni went past Ross Taylor and Yuvraj Singh (5 each). Martin Guptill now has 5 matches as well.

1 T20 International played by India at Feroz Shah Kotla now. Greater NOIDA Sports Complex Ground is now the only Indian ground that has hosted T20Is, but not a single one featuring India. Of course, the ground is the adopted home for Afghanistan.

741 runs added by Rohit and Dhawan, from 23 partnerships. This is now the Indian record. Rohit and Dhawan went past Yuvraj and Dhoni, who have added 730, also from 23 innings.

1 instance of both openers scoring 80 or more in the same innings before Rohit and Dhawan yesterday. Graeme Smith (88) and Loots Bosman (94) had achieved this against England at Centurion in 2009.

80 scored by Dhawan yesterday, his highest in T20Is. His previous highest was 60, against Bangladesh at Mirpur in the 2016 Asia Cup T20.

21 T20I wickets for Ashish Nehra after turning 36, the highest by a seam bowler by far. Nobody else has more than 13. If we exclude all-rounders, Lameck Onyango (3 wickets) comes next.

9 catches taken by Dhoni off Nehra, joint-most for a bowler-wicketkeeper combination. Kamran Akmal has also taken 9 catches off Umar Gul.

6 dismissals by Dhoni in India-New Zealand matches, the most by anyone. Dhoni (4c 2st) moved past Brendon McCullum (3c) and Luke Ronchi (1c 2st). Tom Latham (3c) has also caught up (no pun intended).

27* scored by Mitchell Santner yesterday, his highest in T20Is. His previous highest was 18, against India at Nagpur in the 2016 World T20. 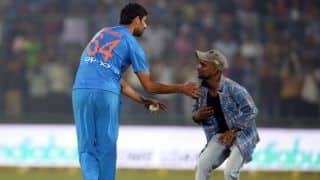 Virat Kohli on Ashish Nehra: To have played 19 years is very hard for a fast bowler