Was Tom Latham lucky? Certainly not in terms of decision, for a right one was made.

New Zealand were cruising pretty comfortably. Indian bowlers were not being able to create an impact. Both Kane Williamson and Tom Latham were eyeing half centuries. Latham, who had employed the sweep to fair amount of success, now fell to Ravindra Jadeja’s trap. Looking to sweep Jadeja, Latham took the ball from outside the off-stump; it hit his boots on its way to KL Rahul at forward short-leg. The moment had arrived for Indians — or had it? Jadeja and co. thought that it was a formality for umpire Richard Kettleborough to raise the dreaded finger. To their astonishment, the Yorkshireman did not do so immediately. The appeals got louder and he asked the Indians to calm down.

Rahul took a juggling catch at chest height, so where was the confusion? The only doubt that preceded all minds was the confusion if the ball hit the ground after the boots but the uncertainty was far more complicated. The doubt was if the ball had touched Rahul’s helmet in attempt to complete the catch. It was not clear if it did so but numerous replays did suggest that the leather was brought under control excruciatingly close to the helmet grille. The benefit of doubt always goes to the batsman and in the end, third-umpire Anil Chaudhary ruled it in favour of batsman.

No wonder, Indians and their fans were surprised at this decision. Moments later, Latham became a Twitter trend.

Tom Latham hits ball onto foot, is caught, but not out as hit fielder’s helmet. Its technical. — Jack Craw (@jackcraw57) September 23, 2016

Was Latham lucky? Certainly not in terms of decision, for a right one was made. The only luck that can be sniffed here is the fact that the ball could have gone straight to Rahul at a belly level or lower but the angle of his bat ensured the elevation.

Law 32.3 (d) clearly mentions: “A fielder catches the ball after it has touched an umpire, another fielder or the other batsman. However, it is not a fair catch if at any time after having been struck by the bat and before a catch is completed the ball has touched a protective helmet worn by a fielder.”

Umpires are often subject to several brickbats from fans and players. It is a tough job umpiring, especially in the subcontinent where the crowd can be noisy and weather conditions can be testing. Players, who do most of the physical work, can afford the odd breaks but umpires cannot. Many of the players playing the games may not know the rules but the umpire pockets a paycheque only because he knows it all.

However, the break sort of helped the Indians. After the referral the New Zealand batsmen looked in a bit of discomfort. The Test has been a nicely contested one with New Zealand holding an upper hand at the moment. Bowling India out for 318, New Zealand went at Tea at 152 for 1 as groundsmen rushed out with covers, for it had started to rain. 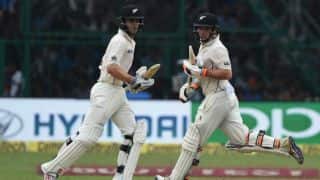