India vs New Zealand 2016: MS Dhoni’s self-promotion to No.4 a masterstroke

India vs New Zealand 2016: MS Dhoni’s self-promotion to No.4 a masterstroke

Dhoni promoted himself at No.4 and demonstrated a gritty innings to steer his side from 41 for 2 to an imposing position.

Indian captain MS Dhoni came out all guns blazing in the third One-Day International (ODI) against New Zealand at Mohali to help his side weather the early storm and steady the Indian ship. India took a 2-1 lead in the three-match series with a booming seven-wicket. Dhoni promoted himself at No.4 and demonstrated a gritty innings to steer his side from 41 for 2 to an imposing position. He stitched a match-winning partnership of 151 with his deputy Virat Kohli for the third wicket and brought down the equation to 94 from 85 deliveries at the time of his dismissal. It was due to this partnership that the New Zealand were running out of options and were at sixes and sevens at Mohali. LIVE Cricket Scorecard, India vs New Zealand, 3rd ODI at Mohali

In the post-match ceremony, Dhoni expressed his views on his preference to bat at 4 and quipped, I have batted down for so long that I always play according to what the situation demands. So I felt No. 4 was an ideal position where I can go and express myself. In the recent times, Dhoni s willow did not yield as many runs as he has the reputation of constructing. In fact, his only moment of glory in last 10 innings came against South Africa at Rajkot, where he garnered a dogged 47. An innings of some substance was due for a long time from him and the team needed their skipper to lead with example.

For most part in his career, Dhoni has batted in the lower middle-order, a position, which hardly provides any breathing space to the batsman. Till date, Dhoni has taken guard on 244 occasions, out of which, he has batted in the top four as many as 42 times. And whenever he did so, he has scored runs aplenty as his staggering average of 68.54 at a blistering strike rate of 91 corroborates the belief. Batting in top four has given Dhoni time to settle down and anchor the innings, which he has done with perfection. If truth be told, Dhoni grabbed the golden opportunity with both the hands when he was asked to bat at three during his initial days in ODI cricket. After a miserable debut and couple of more ordinary games, Dhoni was asked to bat at three, where he hogged all the headlines with a craft 148 against the alarming bowling attack of Pakistan. He stuck to the basics even while attacking with all his might. ALSO READ: Virat Kohli’s 26th ODI ton, MS Dhoni’s brilliance helps India gain 2-1 lead against New Zealand

Dhoni was once acknowledged as one of the best finishers among his contemporaries but that finesses has gone for a toss in the recent times. Lately he is finding a bit difficult to get the ball rolling from the outset and some trouble in rotating the strike liberally. He needs some time initially after which he can back his natural instincts and unleash a barrage of maverick strokes. Dhoni s effectiveness is well-known, at 35; he is still one of the best batsmen in contemporary cricket and brings a lot to the table. He can anchor the innings and then shift gears to fire at will.

Dhoni opened up on him not playing the finisher s role anymore and let some young gun take the initiative. He uttered, I have batted lower down for a long time, I think 200 innings down the order. To some extent I am losing my ability to freely rotate in the middle, so I have decided to bat up and let the others finish. At this level, a batsman s mentality and level of comfort matters a lot. Dhoni is mentally equipped to shoulder the No. 4 responsibility, a factor which adds a hint of confidence to his game. ALSO READ: India vs New Zealand 3rd ODI: Kiwis’ fight, Virat Kohli’s 26th ODI ton, MS Dhoni’s fifty and other highlights

If one introspects closely, if Dhoni bats higher, he does not need to curb his natural instincts to playing according to the situation on most of the occasions. He can express himself and play his natural game. In the third ODI, Dhoni went down the track on his sixth ball and made a mockery of Tim Southee by slapping the white leather over mid-wicket for a one bounce boundary. The sound of his willow, when it met white leather was pleasing for every purist. He placed his innings sensibly and guided India to a safe position.

From the above table, it is clearly evident that Dhoni loves to bat in the top-order. His average of 61.63 at 97.58 strike rate at four is no joke. It will not be wrong to say Dhoni s performance graph takes a turn downwards as he descends in the batting order.

Dhoni s success at 4 will also ease things for Kohli as he gleefully in the post-match presentation said, Good to have MS up the order. If numbers are to be believed, Dhoni will thrive at 4, which will make things simpler for Kohli and enable him to play freely. Kohli has been the spine of Indian batting attack and some extra cushion will only make things better for him. It s a proven fact how rotating the strike eases the pressure and further adds some on the opposition. Kohli and Dhoni complement each other well, they snatch some far-fetched runs leave alone the usual singles and doubles. They are easily two of the best in the business when it comes to running between the wickets. ALSO READ: India vs New Zealand, 3rd ODI: Amusing MS Dhoni and the game of phenomenal numbers

With Dhoni coming up the batting order, the role of a finisher will likely be played by Manish Pandey, who has showed enough promise to fill in the big shoes of a finisher. More importantly, the top-order on most of the occasions will make things merrier for them to handle. Pandey can prosper under pressure and has shown enough signs of his versatility. He can shift gears at will and is well capable of playing those big shots to break the shackles. This would be an ideal platform and time to groom him as a finisher. And the full strength Indian squad will have enough options to choose from for the lower-order. With India having the preference to pick from KL Rahul, Suresh Raina, Ravindra Jadeja and Ravichandran Ashwin, the lower-order will not suffer any kind of damage due to Dhoni s advancement in the line up, instead it will only benefit them.

One thing is crystal clear, Dhoni is eyeing to lead the side in the 2019 World Cup and looking at his fitness and dedication level, there is no such reason on why he should not. If he continues to bat up the order, his confidence will undoubtedly rise and the batting line up will only blossom.

To add to his good fortunes, Dhoni scripted few records with his 80-run masterpiece at Mohali. He went down the track and smashed Mitchell Santner for a massive six over his head to get to the 9000-runs ODI landmark. What stands him apart from everyone is the fact that he is the only man to have accomplished the landmark at an average in excess of 50. Dhoni s career average of 51.17 is the best for any batsman with over 9,000 ODI runs. While fielding, he also recorded his 150th stumping across formats after scalping Ross Taylor s wicket. India vs New Zealand, 3rd ODI: MS Dhoni, Virat Kohli all praise for each other 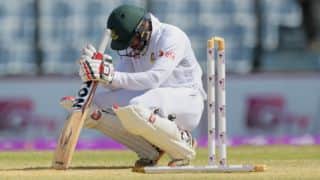 Bangladesh vs England 1st Test at Chittagong: Bangladesh’s smallest defeat in Tests and other interesting statistics