The No. 1 Test side have a massive reputation at stake as they take on the visiting Kiwis in a five- ODI series that starts at Dharamsala on October 16.

Zimbabwe tours are usually an opportunity for fringe players of Indian cricket team to stamp their authority. In 2015, in Zimbabwe, Manish Pandey made an impressive debut for India, Kedar Jadhav slammed his maiden One-Day International (ODI) hundred and earlier in 2016, it was Mandeep Singh who made it count in the Twenty20 International (T20I) series. Then selected for India A for a tri-series in Australia, Mandeep did not have a great run at the start of the tournament.

In India A s second last game of the tournament, Mandeep got the team off to good start against Australia A. His 56 at the top kept India on course to chase 323, agonisingly they fell short of their total by a run. The final was played in a slow outfield and Mandeep s 95 lifted India to a 57-run win and the boys returned home with the trophy. The Punjab opener has been rewarded for his heroics in crucial matches in Australia. When the MSK Prasad-led new selection committee and India s limited-overs skipper MS Dhoni met at Delhi to select the Indian ODI squad for the first 3 ODIs against New Zealand, Mandeep was a name that found a way to the team.

Injuries to Shikhar Dhawan and KL Rahul has benefitted Mandeep s cause but there were clear indications that the new selection committee was keen to reward the stellar performers from India A.

Veteran opener Gautam Gambhir maybe inching closer to a berth in Virat Kohli s Test side but failed to find a place in the ODI side. Prasad revealed that Gambhir s name was discussed too but clarified, we needed continuity and we groomed Mandeep as an opener. He did extremely well against Australia A Down Under. Fair enough.

Dhawal Kulkarni s 9 wickets at 15.30 and his economy rate of 3.64 was instrumental in helping India A triumph Down Under. He was easily the best bowler on display. Having spent a lot of time on benches, Dhawal will eventually get his chance against the New Zealanders.

However, it was under Pandey s leadership that India A clinched the tri-series. Pandey not only led the side to glory but ended the tournament as its highest run-getter. He finished with 359 runs at 59.83 and scored them at a strike rate of over 94. In his last significant ODI innings, Pandey s maiden ODI ton rescued India to a consolation victory at Sydney. Pandey was an automatic choice and is a serious threat to Ajinkya Rahane s middle-order spot in the playing XI. Nonetheless, Rahane may still get accommodated into the batting line-up accompanying Rohit Sharma at the top.

Jadhav has been in sidelined for long and is not getting younger. The 31-year-old made the Australia tour count, amassing 254 runs at 63.50. Jadhav is a fine middle-order who is also renowned for his ability to explode down the order.

While Dhoni, Kohli, Ajinkya Rahane, Rohit, Jasprit Bumrah and Pandey select themselves; many others have been drafted in due to injuries to key players or resting them.

Yuvraj Singh was recently at the National Cricket Academy (NCA), undergoing fitness tests, in turn raising speculations over his selection in the ODI side. However the selectors gave the speculations rest. But had the Suresh Raina surprise in store.

Raina has been a vital cog in India s limited-overs setup for over a decade now. Poor performances off late saw him lose his place from the ODI side. He did not feature in India s tour of Australia and was not picked for the Zimbabwe series as well.

Leading the India Green side in Duleep Trophy 2016-17, Raina had scores of 35, 90 and 52. However that was First-Class cricket so going by the same logic the likes of Gambhir and Mayank Agarwal had presented a stronger case.

Raina has got a lucky break and perhaps this is what he needed to revive his faltering limited-overs career. All-rounder Hardik Pandya, who showed good promise in the T20Is earlier this year, also made the cut. Pandya, who had a dismal Indian Premier League (IPL) 2016 season, also failed to make an impact in the India A tour of Australia.

He seems to have benefitted from the fact that the selectors have lost faith in Stuart Binny and Rishi Dhawan. Like Raina, Pandya too has a chance to make an impression.

Hardik Pandya has impressed those that saw him in Australia. This is an investment in promise, tweeted Harsha Bhogle. If Pandya lives to his promise, India will benefit at large as a quality seam-bowling all-rounder is what India have been seeking for long.

“Suresh Raina has been picked because he offers a good bowling option and with several youngster in the team he offers experience. I was also very impressed by Hardik Pandya, who did excellently in all formats in Australia,” Prasad justified the selection of Raina and Pandya.

Umesh Yadav was disappointing in Australia earlier this year. From the 5 ODI games he has played this year, he has averaged 49.28 and given away runs at 7.21. The years 2014 and 2015 (he was India s highest wicket-taker in the ICC Cricket World Cup 2015) were good for him and the selectors have thrown him a rope due to his experience.

We wonder if Ambati Rayudu s career from now on will be restricted strictly to Zimbabwean perimeters. An ODI average of 50.23, three unbeaten scores in Zimbabwe this year, two of which were in excess of fifties, were not good enough to help him retain his place as Raina leapfrogged him through the selection doors.

Leg-spinner Yuzvendra Chahal too had a brilliant debut series in Zimbabwe and was impressive with the white ball in Australia A too as he finished with 7 wickets at 20 and an economy rate of 4.26.

However, the decision is understandable as New Zealand are a quality limited-overs side and India would like to have some experience in their bowling armoury. With the leg-spin option of Amit Mishra available, selectors have gone ahead with this veteran.

Will miss and poor ODI run

While Bhuvneshwar, Dhawan and Rahul are injured, selectors decided to rest important players like Mohammed Shami, Ravichandran Ashwin and Ravindra Jadeja.With crucial Tests against England and Australia coming up later in the season, it makes sense to keep the best players fresh.

While Akshar Patel will fill Jadeja s absence with his all-round skills, Jayant Yadav has been entrusted to fill the huge boots of Ashwin. These players will be missed and the Kane Williamson-led New Zealand will sniff a chance.

New Zealand are capable of upsetting the best in ODI unit and not to forget, the same side led by Brendon McCullum impressed in the World Cup 2015, ending as runners-up. In fact, New Zealand are placed at No. 3 in ICC ODI rankings, a spot above India. Earlier, this year the Kiwis beat India in their game of spin in the ICC World Twenty20 (WT20I). India cannot afford to be complacent.

Barring the two series wins in Zimbabwe, India have had a dismal run in ODIs post World Cup 2015. Just prior to the mega-event, India failed to notch up a win in the tri-series involving England and Australia. The World Cup run was good before it came to a halt in the semi-final. India then lost away series to Bangladesh and earlier this year in Australia. Worse, India, tigers at home, went down 2-3 against South Africa.

The No. 1 Test side have a massive reputation at stake as they take on the visiting Kiwis in a five- ODI series that starts at Dharamsala on October 16, followed by games in Delhi (October 20), Mohali (October 23), Ranchi (October 26), and Visakhapatnam (October 29). 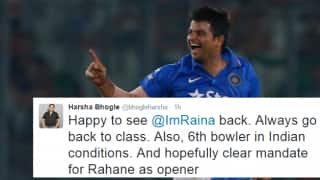 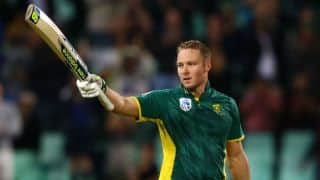