India vs New Zealand, 2nd ODI at Pune: For once Virat Kohli will bat to save a series

India vs New Zealand, 2nd ODI at Pune: For once Virat Kohli will bat to save a series

To make matters more interesting, 3 of 4 innings produced scores in excess of 300 at Pune.

Kedar Jadhav s mother, seated inside the stadium, tilts to the right and tries to see her son raise his bat after scoring 50 off a mere 29 balls. The crowd is on its feet to acknowledge his effort, but she is still seated, tilting more to her right to spot her son under the spotlight. Eventually he scores a hundred and wins the match for India. His parents, wife, and daughter watch him script one of the most memorable chases in international cricket. Although Virat Kohli scores a hundred as well, Jadhav is adjudged Player of the Match for lifting India from 63 for 4 to a prodigious 351-run target.

Does it ring a bell?

At Maharashtra International Cricket Stadium in Pune, India had beaten England by 3 wickets in a thriller earlier this year. The commentators had not bothered to stress on the fact that it was Jadhav s home ground until the diminutive man rose above all difficulties.

India and New Zealand head to Pune, 90 kilometres from Mumbai, for the second ODI of the three-match series. The temperature will be as scorching as it was in Mumbai, but the New Zealanders will face less humidity than what they suffered during the series opener. And with the venue being located on the outskirts of city, the players will enjoy a soothing wind running across along with MS Dhoni who appears like a gush of wind when he sprints.

Jadhav did not score a fifty against Australia. The closest he got was 48. At Mumbai, he was pushed at No. 4, ahead of Dinesh Karthik and Dhoni. Against an imperious Trent Boult, he did well to survive, but soon joined the Indian openers in the pavilion, producing a soft dismissal. Whether India play him at No. 4 or use him as a finisher as they did in England ODI, is something only Virat Kohli and Ravi Shastri can decide. As of now, things do not look too good for him: India have left him out of the T20I series that will follow the ODIs.

One more defeat and India will lose their first ODI series since January 2016. Mind you, this New Zealand team have more might than the ones India faced of late.

Rohit said that he was mindful of Boult s tricks ahead of the first ODI. However, he seemed to have forgotten what he had stated and played an uncharacteristic stroke (or some may argue that it was characteristic). Dhawan played one he should have left, while Dhoni looked clueless in the middle overs. Barring Kohli, Karthik, and Bhuvi, no Indian batsman could apply himself well. While credit goes to the New Zealand bowlers, one cannot disregard the fact the home team let their guard down.

Playing a lone spinner had helped New Zealand control the strike rate. India would have feasted on the Williamson s men had they not played a four-pacer attack. Pandya s onslaught on Santner is testimony to that; and there is always Kohli with his immaculate footwork against the slow bowlers.

New Zealand have forever been a splendid fielding side. You simply cannot imagine a New Zealander falter in the outfield, can you? This very fact gives their bowler some freedom to try an array of line and lengths. That being said, it is their batting that at times is thin on performance.

Williamson had said that the major of part of their homework involved studying the Indian spinners. That was evident at Mumbai. Not once did Taylor and Latham rush through the gears. It was Taylor s experience and Latham s technical proficiency that brought New Zealand to victory.

More importantly, the combination of Guptill and Munro is intimidating at the top. India s new ball-bowlers, Bhuvi and Bumrah, had to be more cautious of their lengths.

Only 2 ODIs have been played at this ground: India lost to Australia in 2013 but beat England earlier this year. To make matters more interesting, 3 of 4 innings produced scores in excess of 300, the lowest being 232 by India. In all, there have been 2 centuries and as many as 6 fifties. These numbers must have already hinted that the track is batter-friendly. The most wickets a bowler could take in an innings are 3, and this has happened only twice.

India trail 0-1, and when his team is down, Kohli only gets better, for he thrives under pressure. New Zealand, on the other hand, are better prepared than any team who visited India of late. They know their business.

The other guys may find hitting down the ground easier. It is important to have different game plans for different conditions and try and stick to that. Tom Latham. 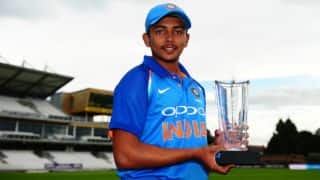 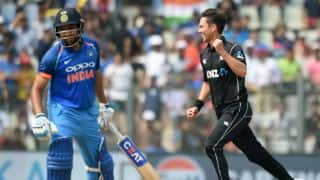