India levelled the three-match ODI series versus New Zealand with an easy win in Pune.

India were in an unfamiliar position ahead of the penultimate ODI versus New Zealand. Known to dictate terms, especially when playing at home, India lost the series opener to Kiwis by 6 wickets at Wankhede Stadium. However, they showed enough character and grit to fightback and level the series. The series finale is nicely set post India’s 6-wicket victory at Pune. Bhuvneshwar Kumar, Shikhar Dhawan and Dinesh Karthik laid the platform, but let us walk through some of the key moments of match:

Bhuvneshwar, Chahal rock Kiwis: On a batting track, India needed early wickets to set the tone. Bhuvneshwar once again showed how much he has improved over the years. He kept it tight, outside off stump, to remove Martin Guptill on a track conducive for the right-hander. The pacer struck again to remove Colin Munro with a knuckle ball.

While Bhuvneshwar provided the platform, Yuzvendra Chahal initiated further hiccups before New Zealand went for the final onslaught. Chahal rocked the lower order with twin strikes in the 44th over. He first dismissed Colin de Grandhomme by offering enough width. In the next delivery, he rattled Adam Milne trapped lbw. These breakthroughs ensured a paltry total on a pitch akin for batsmen.

Tom Latham’s strength becomes weakness: Time and again, it has been proved that one’s strength can lead to their weakness. The same was the case for Latham. In his match-winning ton in the first ODI, Latham scored 35 runs courtesy sweep shots. In this match, he was cautious to play the sweeps against a low-arm bowler, Kedar Jadhav. He, however, used his favourite shot to good use against Akshar Patel.

Nonetheless, in the 30th over, Akshar’s change in angle led to Latham’s fall. The left-hander went for a sweep, missed the length completely and saw his middle stump dismantled. He made 38 off 62 balls.

de Grandhomme, Henry Nicholls show appetite to handle lower order: At 118 for 5, New Zealand were in total disarray. However, de Grandhomme and Nicholls pushed the scoreboard with smart batting. The duo did not do anything silly and attacked according to the field. While de Grandhomme danced down the track and used the long handle to good effect, Nicholls was content in rotating the strike. They found the odd boundaries by taking occasional riska. Just when they looked threatening, the 47-run stand (off 52 balls) came to an end courtesy Bhuvneshwar’s second spell.

Dhawan’s free-flowing knock: When Dhawan starts with his trademark cut and uppish drive, you know there is something special in the offing. The left-hander stamped his authority with a superb pull off Tim Southee which went into the stands. He was composed and looked in complete control in his 68-run knock. He was destined for a big knock before falling for 68. He timed one straight to shot covers and departed with 5 fours and 2 sixes.

Karthik’s gritty fifty in comeback trail: Comebacks aren’t easy. Especially for a player who still hasn’t cemented his spot in his 13-year long career. Karthik made a steady 37 at Wankhede, and was given another chance in a moderate chase. The paltry total helped his cause. The right-hander didn’t get going but fought hard. Known to throw his scalp on soft dismissals, Karthik took ample time, rotated the strike and didn’t do anything cheeky. He struck 4 fours and remained unbeaten on 64* (off 92 balls) to take India home. This knock will bolster his confidence for the will series decider on Sunday.

Since the No. 4 spot is up for grabs, Karthik’s fighting innings will be a sigh of relief for the team management.

Also, this is India’s 50th win versus Kiwis in the 100th encounter between both sides. 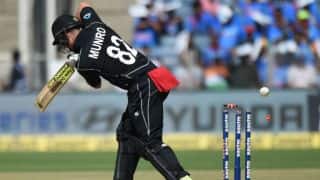