New Zealand prevailed by 6 runs at the Feroz Shah Kotla Stadium in Delhi on Thursday to register their first win in ODIs in India since 2003.

New Zealand prevailed by 6 runs at the Feroz Shah Kotla Stadium in Delhi on Thursday to register their first win in ODIs in India since 2003. Kane Williamson slammed his eighth century of his career first in ODIs against India and scripted a win which is nothing less than historic. It was not the case that New Zealand produced an outright win; if Williamson is taken out of the equation then the Kiwis did not even have 150 on the board to defend against the Indian batsmen. However, their bowlers did a good job to strike early and maintain the trend, and thus end their poor run on this tour when it looked like they would leave the Indian shores without any win. Full Cricket Scorecard: India vs New Zealand 2nd ODI at Delhi

Chasing a moderate 243 to win, Indian run-machine Virat Kohli had a rare failure, and the rest of the batsmen could not do enough to take their team past the finish line. New Zealand scored 242 for 9 in their allotted 50 overs, and in return, India fought till the end with Hardik Pandya scoring 32-ball 36 with 3 boundaries, and Umesh Yadav remaining 18 not out. But since New Zealand registered their first win of the tour, their achievement was truly special given the circumstances they have been in. Let us see how they scripted their win at Delhi:

Sturdy start: Williamson is New Zealand s best batsman on this tour of India, and if there is to be the one next to the New Zealand captain, is it Tom Latham. The two batsmen added as many as 120 runs for the second wicket, not only bailing out their team from trouble after Martin Guptill was dismissed for second-ball duck by India pacer Umesh Yadav. Both the batsmen attacked the Indian bowlers with a lot of intent, and the rotation of the strike was up to the mark as well. While Williamson was lucky enough to bring up his century, Latham was unfortunate as he fell for run-a-ball 46 which was studded with 6 boundaries and 1 six. ALSO READ: Kiwis win thriller by 6 runs, level series 1-1

Kane Williamson delivers: It was largely due to a fantastic century by Williamson, who brought up his eighth century in ODI cricket to bolster his side s chances of winning this match. Williamson was belligerent in his innings, but at the end of it, it turned out that the Kiwis continued to rely on their captain who is also their best batsman on this tour to do the bulk of the scoring. Battling an injured hand, Williamson ensured that New Zealand posted a respectable total, if not a challenging one, against a batting-heavy Indian cricket team. Coming into bat at his usual No. 3 position following the early dismissal of Martin Guptill, Williamson faced 128 balls and struck 14 boundaries as well as 1 six to score 118. He scored close to half of the runs New Zealand managed, as the Kiwis were restricted to 242 for 9 in their allotted 50 overs.

Jasprit Bumrah dazzles at death overs: Bumrah was without any doubt the best bowler for the Indian cricket team. Bumrah showed why he has all the signs to become a quality bowler in limited-overs cricket, displaying lot of control over his bowling, especially in the death overs. Bumrah used the slower ones as well as he fired the yorkers, which ensured that the Kiwis do not go past the 250-run mark especially when they were looking set for reaching close to 300 runs.

Virat Kohli fails, for a change: It was a rare failure for the Indian run machine Virat Kohli, and it was one of the most bizarre dismissals for the right-handed batsman. Having made a sedate start, Kohli decided to chase one down the leg off Anton Devcich. Had Kohli left the ball alone, it would have been an extra run for India, but at the end, the hosts ended up losing a lot. Kohli got a faint edge, and despite the New Zealand players not being very confident in their appeal, the batsman was adjudged out.

Ajinkya Rahane cops a bad decision: If popular opinion is taken into consideration, Rahane was unlucky as he was the victim of a harsh decision. Having pulled a short ball off Tim Southee, the ball was collected convincingly by Corey Anderson at deep fine leg neither to the naked eye nor with the help of technology. It is no exaggeration, but the TV umpire C Shamshuddin would have spent about at least five minutes to arrive at a decision. Every next look at Anderson s take was giving an impression that it was not out; the fielder was as unsure as the third umpire who kept taking a look from various angles. But then, he decided against Rahane, and the batsman had to walk back having copped up a tough decision.

Kedar Jadhav s resistance: The right-handed batsman added 66 runs with Dhoni, in which he contributed 41. India were not required to score quickly, with the target being under 250, Jadhav clobbered 2 sixes and as many boundaries to score 41 off 37 balls. However, the right-hander was unfortunate as he missed out on a deserving half-century.

MS Dhoni The End of a Finisher? A lot has already been written about Dhoni s dwindling powers as a finishing batsman. The second ODI was yet another instance which consolidated the belief that Dhoni is no more the same marauding finisher in limited-overs cricket. The Indian captain came out with India precariously placed at 72 for 3, but when he got out, the team s position remained perilous as it was earlier. Dhoni tried taking his time; he consumed as many as 65 balls, but managed only 39 runs with three boundaries. His end was spectacular though; Southee, in his follow-through, jumped to his right when he was going in the opposite direction and plucked it out of the ground with one hand. 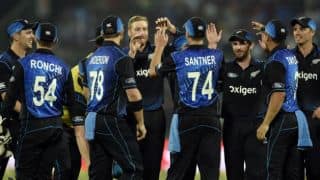 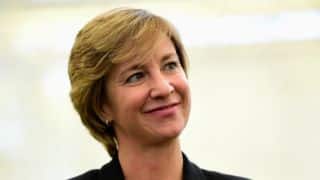