India staged many heroics at , the most remarkable being the second Test of the Border-Gavaskar series of 2000-01 with jam-packed gallery, contrary to the empty stands during India vs New Zealand, second Test.

Being a cricket-lover, it is a matter of luck to be born in a city that has an iconic cricket stadium. Eden Gardens has been one of India‘s prime venues since its existence. The balanced pitch, history of high-scoring matches and a capacity of precisely 66,349 easily makes it one of the most prestigious grounds in the world. It is like India’s very own Lord’s (more so with the newly installed bell). India staged many heroic wins here at the ground, the most remarkable being the second Test of the Border-Gavaskar series of 2000-01. The turn-around after a defeat in the first match, VVS Laxman’s historic 281, Harbhajan Singh’s reincarnation with a Test hat-trick all elements that made it one of the most memorable Test victories by any Indian side. The match is said to have changed Indian team entirely, bringing in the aggressive approach that the modern team is carrying forward. Live Cricket Scorecard, India Vs New Zealand 2nd Test at Kolkata

Apart from the favourable playing conditions, another thing that makes the venue a great place to play is the crowd. Eden Gardens has had a reputation of having a passionate and vocal crowd traditionally. Looking at the 2001 match as well, one could see a full-house Eden Gardens. As Harbhajan dismissed Glenn McGrath and India won the match, the whole crowd erupted with applause and cheers. The ground was being jam-packed with passionate cricket fans turning up for the match and not only for the final day of the match, but consistently.

Let us now look at the going second Test between India and New Zealand. India are in the driver s seat, winning the first Test at Kanpur with ease. Though skipper Virat Kohli has failed to score runs, there have been glorious innings from Murali Vijay, Cheteshwar Pujara in both the innings. Rohit Sharma also played a crucial role while Ravichandran Ashwin and Ravindra Jadeja shone with both bat and ball. India s all-round performance in the first match was a sign that the home team is having a good form. With the home team performing well consistently, more people are expected to turn up as they expect their favourites to win. However, when the match started, most of the stands looked empty. After a not so good start on Day One, India managed to get to a good score as local boy Wriddhiman Saha scored a commendable half-century. Another Bengal player, Mohammed Shami, was also active on the field as he helped Saha build a crucial lower-order innings and also clinched an early wicket to help India step closer to a good first innings lead. Unfortunately, there were not many to watch it live and cheer for these two or the team.

While Kolkata is known as the cultural capital of the country and promoters of sports with supporters coming out to watch live sports in good numbers, one can blame the wrong selection of days to hold a match at the venue. As passionate the people of the city are about any cultural event, it is time for their biggest festival Durga Puja. With most of the people busy with the festivities, it was not easy to draw their attention towards a cricket match going on at the same time and as expected, empty chairs witnessed Saha score his second Test half-century.

As the puja dates are known beforehand, the question is was it right for Board of Control for Cricket in India (BCCI) to hold a match at this point of time, given they postponed a One-Day International (ODI) as it clashed with Karvachauth?

While the people of Kolkata cannot be blamed entirely for not turning up for the match, this is not the first time India are playing in an unusually empty Eden Gardens. A couple of years back, when Sri Lanka visited India for an One-Day International (ODI) series, Eden Gardens got the fourth ODI. The iconic venue was celebrating 150 years of the venue but there were not many of the city s men to be a part of the celebration. The match went down in history as Rohit Sharma played a knock of 264 in the match, scoring the highest individual score in an ODI by any batsman. Eden, however, was not in its full strength to cheer for the Indian batsman for making a history.

Having spoken about two formats of international cricket, it is evident that it is not only about Test cricket that crowd does not turn up. A low attendance in the ODI against Sri Lanka can also be countered by the fact that India had already pocketed the series and the match was more of an official one than real contest in the series.

However, contrary to that, people of Kolkata turned up for Indian Premier League (IPL) matches in huge numbers. Again, during the ICC World T20 2016, despite heavy rains, people came in to support the home team as they played Pakistan. Is it then the shortest format that interests the crowd?

Another factor may be the amount of cricket played round the year in India. Earlier, there was lesser number of games and people had to wait for their chance for the venue closest to them to get a match to host, then standing in queue for long time (At times overnight, depending upon the importance of the match. Things have changed, big venues such as Wankhede, Eden Gardens host cricket matches more frequently. Lifestyle has changed and people have started preferring T20 format which saves time unlike Test of ODI, which take up the entire day.

But this is not good news for cricket.

Test cricket is cricket at its technical best. To maintain the essence of the game in true sense, people need to step up and show their support by being there at the venue as no experience is as electrifying as watching a live match. A cricket lover s heart aches to see a ground, known for the passionate crowd, is not even half filled with an important international match going on. A full-house ground encourages the players to play well and for Test cricket to live on, people will have to love it as they used to love it a decade back. Pakistan surpass India with most ODI wins; Australia at No.1 spot 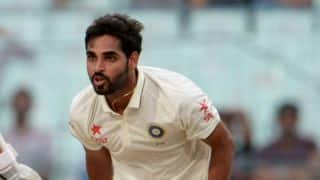