The Indian cricket team had a mixed day against New Zealand at the Eden Gardens in Kolkata in the second day, as fortunes swung in favour of one team to another on Day Three.

The Indian cricket team had a mixed day against New Zealand at the Eden Gardens in Kolkata in the second day, as fortunes swung in favour of one team to another on Day Three. India began the day having New Zealand placed at 128 for 7, and despite attaining a crucial 112-run lead in the first innings, the Indians had to bring their A game forward in order to end the day on a high. Coming into bat a sometime before lunch, India were unharmed for the first five overs. But when play resumed in the second session, the Indian team made a pathetic start, reaching 43 for 4 at one stage. Thanks to a brave 45 from Virat Kohli who deserved a century keeping in mind the way he batted and a gritty half-century from Rohit Sharma the Indians were able to save their face on a day when New Zealand seamers had them on their knees. It was a day that belonged to both the teams, as New Zealand punched above their weight to have India in trouble, and the hosts, on their part, batted extremely well in patches to end the day with the game in their firm control. Let us take a look at the highlights:

Jeetan Patel s fightback: There is a reason why the Kiwis spinner has two centuries in First-Class cricket. And that reason was at display on the third day morning at the Eden Gardens in Kolkata. The right-handed batsman, who was not expected to bat the way he did on Sunday, looked more convincing than his senior partner BJ Watling. Patel was very aggressive in his innings, taking charge of the run-scoring and forcing Watling to play the second fiddle. He used his feet well, and most importantly, presented full face of the bat when he prodded forward to defend. In his run-a-ball 47, Patel slammed as many as 9 boundaries, 3 off which came in a single over from Ravindra Jadeja. It was largely due to Patel s innings that New Zealand were able to bring down the deficit.

India s horror start: The Indian cricket team got good starts in the Kanpur Test, but the same cannot be said about this Test. In both the innings, the Indian batting has let their team down. While in the first innings the Indians were tottering at 46 for 3 at one stage when Cheteshwar Pujara and Ajinkya Rahane rescued them, in the second essay India s situation was even more worse. Even with a crucial lead of 112 runs which they earned in the first innings, the Indians made a horror start. Murali Vijay was dismissed by Matt Henry once again, Pujara was very unlucky as an umpiring howler went against him. Shikhar Dhawan, who was batting in an extremely crucial stage in his career, did well to hit a few boundaries but all he could manage was a 32-ball 17. Out of the top three, Pujara was unlucky, but not Rahane. The Indian vice-captain played a bad stroke, totally uncharacteristic of Rahane. He played a pull shot on a delivery that kept slightly low than anticipated, and a leading edge flew towards Trent Boult, placed at the deep fine leg. All that Boult had to do was to cover small part of the field ahead of him and take a simple catch. Rahane s dismissal had India gasping at 43 for 4. Full Cricket Scorecard, India Vs New Zealand 2nd Test at Kolkata

Poor umpiring, really? Not that there is a desperate need to get the Decision Review System (DRS) in place, but there is something that is seriously wrong with the decision making of late. The on-field umpires have been making some serious mistakes far too often, and one of those was witnessed on Sunday afternoon. In a very critical phase when the New Zealand bowlers were all over the Indians, there was a strong appeal for leg-before against Pujara. The batsman had missed on to connect with a ball that was drifting down the leg side, but when the Kiwis appealed for a leg-before against Pujara, umpire Richard Kettleborough raised his finger. It was perhaps due to the pressure built by the Kiwis on the umpire, as a few deliveries before this one, there was another loud appeal as well. However, realising their mistakes soon, both the umpires gave correct decisions against Virat Kohli as well as Ravichandran Ashwin.

Virat Kohli rises up: The Indian captain has had an ordinary run in the Test format ever since he struck that double century in West Indies. But on Sunday, when his team was in a precarious position, Kohli played a gem of an innings. Kohli was dismissed for 45, which came off 65 balls and 7 boundaries, but this is not everything. Numbers will tell you one story, but they may never tell you the context. When India were pushed on the backfoot in their second innings, they needed something out of the box and Kohli provided them exactly that. The Indian captain counter-attacked, and displayed some glorious strokes from his repertoire. Kohli and Rohit Sharma added 48 runs for the fifth wicket, and 33 out of these were scored from only 30 balls. It was a counter-attack which New Zealand would not have anticipated, and it certainly took them by surprise.

Rohit Sharma s resilience: The right-handed Indian batsman disappointed with his approach in the first innings, when at a very crucial junction, he was dismissed bat-pad off Jeetan Patel. There were signs of timidity when Rohit was batting in the first innings, but when India needed their Hitman to stand up and deliver at the venue which he likes the most, he did not disappoint. There would not have been so much of compose and calmness in any of the Rohit s Test half-centuries than on Sunday, when he curbed his instincts, kept down the head and bailed India out from a dangerous position. Rohit completed his sixth half-century in 89 balls, hitting 4 boundaries and 2 sixes in the process. However, the right-hander was unfortunate to have missed out on a deserving century, falling for 82.

India were ahead by 339 runs in the second innings, and it can be expected that the hosts will once again want to get to a safe total before they either get bowled out, or ask New Zealand to chase. But since India have only 2 more wickets left in their ranks, a declaration is unlikely. 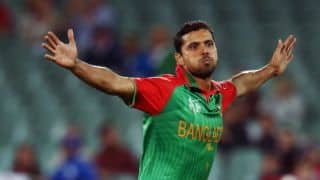 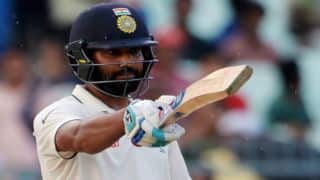