New Zealand tried to punch above their weight throughout the second Test at Kolkata, but India were too good for a team which lacked consistency, talent as well as skills to challenge the hosts.

New Zealand tried to punch above their weight throughout the second Test at Kolkata, but India were too good for a team which lacked consistency, talent as well as skills to challenge the hosts in these conditions. India won the second Test in four days by a margin of 178 runs, and thus toppled their arch rivals Pakistan to become world No. 1 team in the longest format of the game. India had flirted with the top spot in ICC Test Rankings briefly when they were in West Indies, but Pakistan were the deserving side back then. However, the situation has changed drastically with India winning their last two Tests by massive margins. India won the first Test by 197 runs in Kanpur, and in the second Test at the iconic Eden Gardens in Kolkata, their margin of victory was of 178 runs. Tom Latham fought extremely well for the New Zealand team, but his innings of 74 was not enough in a team total of 197 to save the game. FULL CRICKET SCORECARD: India vs New Zealand, 2nd Test at Eden Gardens, Kolkata

Wriddhiman Saha s half-century: The Indian wicketkeeper-batsman continued to take giant strides, as he completed his fourth Test half-century. Saha resumed the day at 39 not out, and it did not take him long to get to his second half-century of the game. However, the right-hander did get stuck at the crease when he was on 48 not out, but all it took was two excellent sweep shots for two consecutive boundaries to bring up his half-century. With the Indian batting not having enough in their ranks, there was always a chance of Saha not getting to the milestone, but rarely did the Indian wicketkeeper-batsman flinch during his innings. Saha is one of those cricketers who invariably keep their head down and keep working hard to keep making most of the opportunities, and may be this is the reason Saha is making waves in the Test arena, and he was deservingly awarded with the Man of the Match award. ALSO READ: India trump Pakistan to become No. 1 team in Test cricket

New Zealand s surprise: For the first time in the Test series, New Zealand were able to make a confident start. The New Zealand openers Martin Guptill and Tom Latham added as many as 55 runs for the first wicket, which was the second best opening stand for either of the teams in this ongoing Test series so far. New Zealand making a strong and confident start was not the only bright spot the touring side when their fourth innings began, but what was special was to see the kind of approach the Kiwis openers had in their innings. Both Guptill and Latham showed a lot of application and discipline, and added runs at a healthy rate to provide New Zealand the best start they have had so far in the series. Guptill and Latham s 55-run stand was broken early into the final session, but the fact that they were able to provide India a lot of jitters and scare of an unlikely, but inspired fightback was certainly a delight for the touring party. However, the Kiwis soon ran out of steam, and lost their way when India made two quick breakthroughs.

Back to square one: It can be said that the New Zealand cricket team squandered a terrific start provided by their opening batsmen. When Guptill was dismissed on the fifth ball into the second session, a surprised entry came into the middle in the form of Henry Nicholls. The left-handed batsman did not look convincing enough throughout his innings of 24 off 66 balls, as he added 49 runs for the second wicket with Latham. The foot movement was as dodgy as the way he brought his bat forward to play against the Indian spinners. While it looked like Nicholls wanted to present the full face of the bat, more of than not he was being beaten. The dismissal of Nicholls brought the Kiwis stand-in captain Ross Taylor in the middle, but the right-hander who had looked well-set for a big innings, had a poor outing. Taylor faced 28 balls for his innings of 4 runs, and missed a straight one from Ashwin as the ball straightened up pretty much after pitching in line of the off-stump.

Tom Latham s fight: When New Zealand began their chase, the start was so emphatic that it looked like they would go on to challenge India s total and might as well achieve it, since the target was less than 400 and the pitch remained good for batting throughout the contest. Latham was the star of the New Zealand innings as he batted extremely well for his innings of 74, but he has only himself to blame for missing out on a deserving century. After batting through the second session without any rash stroke or unwanted risk, the Kiwi opener went to drive a delivery from Ashwin which was far away from his reach. Latham hurried into the stroke, and thus got an edge. Saha is not putting any step wrong of late, and he took a clean catch to get rid of the most threatening batsman from the New Zealand ranks.

Perseverant Indian cricket team: This is a very young and experienced cricket team, which tends to blow hot and cold as far as their patience and temperament is concerned, especially while fielding. Their captain Virat Kohli can often be seen getting ruffled when the going is not in favour of his team, which at times results in unwanted aggression and show of power. But, none of this was visible on Monday on the fourth day, especially when New Zealand batted extremely well one hour before and after the lunch break. The middle of the day remained the best time to bat for both the teams in this Test, and maybe realising that it was something which was out of his control, Kohli concentrated on keeping his side focussed on the task which was there on their hands.

The two teams now head into the third and final match at the newest venue in Test cricket, at the Holkar Stadium in Indore. The third and final Test will be played from October 8-12, 2016, following which India and New Zealand will gear up for a five-match ODI series. 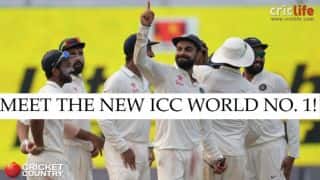 India beat New Zealand by 178 runs and move to no.1 spot in Test rankings - Twitter reactions