India vs New Zealand, 3rd ODI at Kanpur, preview and likely XIs: It’s all about handling pressure of compe

Virat Kohli, as a full-time captain, has not lost an ODI series yet. He has had close encounters at helm, but he often finds a way to finish first and then celebrate the victory lap.

Virat Kohli, as a full-time captain, has not lost an ODI series yet. New Zealand had levelled 2-2 last year during their visit here, but India won the last hurdle. Kohli has had close encounters at helm, but he often finds a way to finish first and then celebrate the victory lap.

However, the New Zealanders who had visited last year were relatively na ve. This time they are a different team. They chased down 281 against a quality bowling unit at Mumbai and took 0-1 lead. They could not emulate the stellar performance at Pune, but still made sure that they punch above their weight.

Kane Williamson stressed on the fact that his team has done the homework, and are well prepared than they were in 2016. The result is 1-1 in the ongoing three-ODI series. Both teams now head to Green Park in Kanpur for the series decider.

India made a few adjustments in their approach during Pune ODI: first, all-rounder Akshar Patel replaced Chinaman bowler Kuldeep Yadav; second, part-timer Kedar Jadhav bowler 7 overs to pace up the innings and slow down New Zealand s run rate; third, Dinesh Karthik batted at No. 4 ahead of Jadhav and MS Dhoni; Hardik Pandya was promoted to No. 5 ahead of Jadhav and Dhoni.

To cut it short, every ploy of theirs worked and they squared the series. In other news, the match will be played at Bhuvi s home ground. His figures read 18-0-109-1 at the venue.

Bhuvi s fellow pacer Jasprit Bumrah, on the other hand, needs a wicket to complete half-century. Adding more episodes to the tale of milestones, Kohli needs 83 runs to complete 9,000 ODI runs. If he does so, he will be the quickest to the milestone.

New Zealand have played the same XI so far, and would not tinker with it at Kanpur as well.

After successfully chasing down 281 in the series opener, New Zealand slumped to 230 for 9 in Pune courtesy India s collective bowling efforts. Tom Latham played a handy innings, but his team needed way more than that. Lucky were they that lower-order batters Nicholls and de Grandhomme added 32 runs between them and took the score past 200. They gave their best to defend the score, but India sealed the match winning it by 6 wickets. Trent Boult, who had rocked the top order in Mumbai, went wicketless.

If New Zealand are to pull off the unlikely, their batsmen will have to play as a cohesive unit and bowlers will have to at least choke India in case they fail to take wickets.

We have not been challenged like this in a while and it is a short series. So there was pressure in the last game that we could lose the series (having lost the first match). But the way we came back shows the character of the team. Tomorrow’s match is also about handling pressure. We will try to play like we played the last game. Bhuvneshwar Kumar 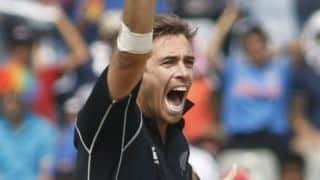