India hammered New Zealand by 7 wickets in the third One-Day International (ODI) of their five-match series on Sunday to take a crucial 2-1 lead.

India hammered New Zealand by 7 wickets in the third One-Day International (ODI) of their five-match series on Sunday to take a crucial 2-1 lead. At the Punjab Cricket Association (PCA) Ground in Mohali, the Indians produced a fine batting performance, led by Virat Kohli and MS Dhoni to chase down target of 286 runs set by New Zealand. While Kohli slammed a fine 26th ODI century his 16th while chasing in the 50-over format MS Dhoni was unlucky as he fell for 91-ball 80. Dhoni deserved a century for the way he batted on Sunday, but the game once again was dominated by a batsman who is on a roll as far as making records is concerned. LIVE Cricket Scorecard, India vs New Zealand, 3rd ODI at Mohali

Kohli scored 154 not out off 134 balls, studded with 16 balls and a six. Kohli and Dhoni added as many as 151 runs for the third wicket; yes, Dhoni came into bat at No. 4 after all and showed once again what difference it can make. However, it was not before Ross Taylor s dropped catch when Kohli was on 6, and it did come back to hit New Zealand as hard as it could. In the first innings, New Zealand huffed and puffed and managed 285 from 48.2 overs, with Tom Latham scoring a fine 61, Jimmy Neesham smashing a quickfire 57 and adding 84 extremely crucial runs with Matt Henry. Let s take a look at the highlights of the game:

Tom Latham continues to sizzle: If Luke Ronchi was New Zealand s best batsman in the Test series in context to scoring runs, it has to be Tom Latham in the ODIs so far. The left-handed batsman had missed out in the second ODI for getting a half-century after carrying his bat in the first match, scoring 79 not out. On Sunday, Latham was back at his best again, scoring a fine 61 to provide New Zealand a strong start even though a few around him such as Martin Guptill and Kane Williamson failing to make most of the opportunity of scoring runs on an easy wicket at Mohali.

Ross Taylor shows fight: The New Zealand veteran batsman scored 44, but not before looking fidgety at the start. Taylor added 73 runs for the third wicket with Latham, in which he contributed the highest. Taylor smacked 4 boundaries and 1 six to score 44 off 57 balls, and once he found rhythm, he looked ominous. However, a brilliant delivery from Amit Mishra ended his innings prematurely.

New Zealand s collapse: Collapses are not new to New Zealand on this tour, and one more was witnessed on Sunday when the Kiwis stuttered from a comfortable position of 150 for 3 to 199 for 8. Kedar Jadhav and Mishra were the bowlers who did the damage, wrecking the Kiwis middle and lower order and giving a sign that this innings might be over soon. Jadhav got 3 for 29 off his 5 overs, accounting for Williamson, Latham and Corey Anderson. Mishra, on the other hand, removed Taylor and Ronchi in quick succession to damage the New Zealand innings.

Jimmy Neesham and Matt Henry revive New Zealand: Jimmy Neesham got his second half-century on this tour from three matches, and one wonders what difference he would have made had he been available for the first two Tests. Neesham scored a fine 57 off 47 deliveries, striking 7 boundaries in the process and ensuring that New Zealand do not get bowled out for a moderate total. He added 84 runs with Matt Henry, the tailender who remained unbeaten on 39 off 37 balls, hitting 4 boundaries and 1 six. Henry looked as good as a top-order batsman, showing deftness in rotating the strike and hitting the ball cleanly whenever there was an opportunity. Their partnership for the ninth wicket helped New Zealand to post the biggest total of the series so far.

Kedar Jadhav, India s newest wicket-taking option: Jadhav had 1 wicket in List A cricket when he came into this series, and now, he has 6 wickets in these three games so far. While MS Dhoni should be given a lot of credit for trusting the bowler in Jadhav, the right-arm part-time spinner should be praised too for turning up with returns. In the third ODI, his spell of 5-0-29-3 helped India tighten up screws further on New Zealand.

Rohit Sharma, Ajinkya Rahane continue to flop: India made a poor start to the daunting chase with Rohit and Rahane failing once again. Rahane, who has been guilty of throwing away with his wicket, once again gifted his to New Zealand. On the penultimate ball of the third over, he played one straight to cover, and walked back to the pavilion with 5 runs off 10 balls and a boundary. On the other hand, Rohit, who had begun with two fours in the first over, failed to read a slow ball an off-spin delivery by Tim Southee and was trapped in front of the wicket.

MS Dhoni on record-breaking spree: It has been a very long time since Dhoni came up with a special innings, and the long and painful wait ended on Sunday when he notched up a fine 80, off 91 balls. Dhoni, in the process, became the 17th batsman overall and fifth Indian to score 9,000 runs in ODI cricket. Among the active cricketers, Dhoni is obviously the highest run-getter for India in the format. As his innings progressed, Dhoni hit three sixes, which not only helped him surpass Sachin Tendulkar in regards to hitting most sixes in ODI cricket by an Indian, but he also went past former captain Sourav Ganguly. Dhoni went past Ganguly s record of 189 sixes as captain during the third ODI.

The run-machine Kohli makes another record: Kohli brought up his 3,000 runs in ODI cricket playing in India, and he continued to make some or the other record whenever he comes out to bat. On Sunday, he became the quickest to 3,000 ODI runs, surpassing Ganguly (70 ODIs) and AB de Villiers (71 games) by bringing up the feat in just 63 matches. He completed his 26th century overall, his 16th while chasing. Out of the 16 centuries while chasing, this was his 14th which resulted in an Indian win. Kohli also equalled Tendulkar’s record of smashing 14 tons to lead India to victories. 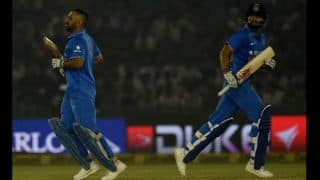 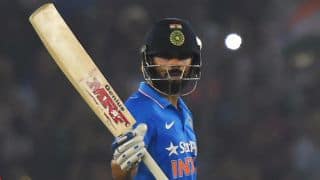