This was India's 13th undefeated bilateral series at home across formats.

100 T20Is for New Zealand, joint 2nd-most for any country. Pakistan (120 matches) have played the most, while South Africa have also played 100. With 88 matches, India occupy the eighth spot.

13 undefeated bilateral series for India at home across formats. The last defeat was back in 2015-16, against South Africa. They had lost an ODI series 2-3, and just before that, a T20I series 0-2.

8 wickets by Ish Sodhi in India-New Zealand encounters, the most by anyone. Sodhi went past Daniel Vettori (6). Trent Boult has also caught up with Vettori.

6 wickets by Boult in the current series, the 2nd-most by anyone in a bilateral series against India. Umar Gul (7 wickets in 2012-13) leads the way. Sodhi has finished at joint-3rd spot, with 5.

1 instance of Dhoni arriving at the crease but not facing a ball across formats in international cricket. He has two golden ducks, both in ODIs.

3 catches by Mitchell Santner in India-New Zealand matches, the joint-most. Santner is at par with Vettori, Nathan McCullum, and Hardik Pandya.

1 player has played all 8 India-New Zealand matches Dhoni. Martin Guptill is next, with 7.

1 Man of the Series award for Jasprit Bumrah, joint 2nd-most among Indians. Only Kohli (4) has more. Bumrah is tied with Yuvraj Singh, Ravichandran Ashwin, Suresh Raina, Barinder Sran, and Chahal. 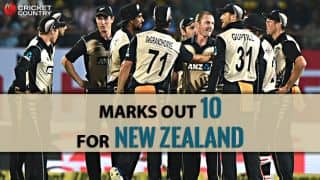