Kane Williamson is an important cog in the wheel of the New Zealand s fragile batting line-up which is taking on a herculean task of facing the Indian spinners in India.

India has always been the most decisive tour in any player s cricketing career. Score runs against the might of Indian spinners and attain a black belt in batting on dust bowls. Any visiting team who has someone who can fiddle under Indian conditions and challenges, not only enhances his own reputation but also does wonders for the teams’ cause. The current New Zealand team who has players with exquisite batsmanship has always suffered under subcontinental conditions. New Zealand before touring India was mauled by a volatile South Africa in Test, opening up many chinks in their armor. FULL CRICKET SCORECARD: India vs New Zealand, 3rd Test at Indore

New Zealand has always had talent and strong batting presence in their sides, starting right from John Wright, Martin Crowe, Stephen Fleming, Nathan Astle and the recently retired Brendon McCullum. They, in their very own manner, have inspired a whole line of batting production. The likes of Ross Taylor, Tom Latham, BJ Watling and their current skipper across formats Kane Williamson have often credited such greats when it comes to the knowledge of batting. Taylor has been there since eternity (don’t take it literally). He made his debut in 2002, and since then, he has captained and also been dropped from the New Zealand team. Taylor is not a poor batsmen, but his inconsistency has hampered his career due to which, even after being in the game for 14-years, he is not the most reliable of batsmen for them.

After McCullum announced retirement from Tests in early 2016, New Zealand were on the outlook of a batsmen who could form a fulcrum in their batting prowess. Amidst all the hype around McCullum in the past few years, there was this new and much-talented Williamson, who was jumping up the ladder with every match he played. Williamson had a lanky and babyish aura about him, but soon showed his immense aptitude to learn, consume and apply all his knowledge. Williamson struck a fluent and unnerved hundred on debut against India in 2010, which ensured New Zealand drew that match and revived hopes of a series win. Since then, Williamson has gone from strength to strength, while inking himself along side modern-day greats such as Virat Kohli, Steven Smith and Joe Root.

Williamson has surpassed few cricketing legends with much ease when it comes to batting, and looks to march past many more aged just 26 years. Williamson is eighth in the list of leading run-scorer in Test for New Zealand with 4,493 runs in just 53 matches. Williamson, so far, has scored 14 hundreds and 23 half-centuries 51.05. Williamson’s Test average is miles ahead of his Indian counterpart in the series. Meanwhile, Kohli averages 43.76 (mind you, Kohli has a far more superior batsmen around him). Williamson has both, technical adroitness and unorthodox blaze, which makes him the most apt New Zealand batsmen under testing conditions. Talking about the modern-day ‘Fab 4’, Williamson comes second in terms of runs scored away from home conditions.

Williamson has time and again provided us with visual delight, where he has single-handedly lifted his team to unmatched heights. Even at crucial junctures, he remains a lone warrior with the bat, starting from one of his most exquisite and hardworking century against Sri Lanka in Sri Lanka. Williamson s knock of 135 off 305 against the likes of Rangana Herath and Suraj Randiv was a pure bliss to the eyes for any purist of the game. Thanks to that knock New Zealand were able to record a mammoth first-innings score,which is a boon for every touring side in subcontinental conditions.

Another of Williamson’s gem away from home was against Australia in their 2015-16 tour, during the Trans-Tasman Trophy in 1st Test at Brisbane. Australia, powered by David Warner and Usman Khawaja s ton, decided to declare at 556 for 4 and asked New Zealand to chase it down. After a cautious start New Zealand were in a spot of bother at 114 for 4, with all their recognised batsmen back in the pavilion apart from one man in a band of boys, Williamson.

Williamson against the likes of Mitchell Johnson and Mitchell Starc looked a statue of calm and composure. Williamson s intent was very clear from the onset: hit everything that is to be and defend that is not.

Williamson’s timing and placement of the ball was supreme, while his cut, glides, drives and flicks were unlike anything one would have witnessed against Australian quicks. Even though New Zealand lost the match by 208 runs, the match will always be remembered for Williamson’s astute and grittiness. Unlike his contemporaries, Williamson’ hundreds have always been underrated, but they all stand out in terms of their worth.

Here is a table that shows how each batsman has averaged since Williamson s debut in Test, where New Zealand have won and lost matches.

Williamson, burdened with the responsibility of captaining an inexperienced and youthful New Zealand side, took on the might of the Indians for a 3-Test and 5-ODI series. Williamson, in the thirteen Tests he has played in Asia, averages 47.82 as compared to career average of 51.05. Williamson’s average drops down more to a mere 38.72 from six Tests. Williamson, in the first Test at Kanpur, showed why he forms an all-important cog in the teams’ batting line-up and how much of a structural support he is.

Williamson missed out on the second Test at Kolkata due to bug, which hampered his teams’ chances a lot, without whom the batting lacked spine and valour. IPL's fate to be decided by BCCI members: Anurag Thakur 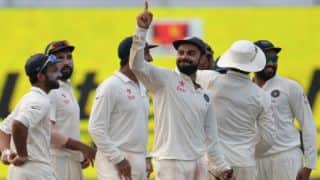