With one more innings to play, let's hope New Zealand sign off well and not fall pray to similar mistakes with the bat.

If a team commits mistakes, they typically tend to learn from it and try to curb it the next time they take field. In the ongoing series against India, New Zealand batsmen have not capitalised much on their starts and have thrown their wickets away at crucial junctures. Soft dismissals also remained a concerning factor for the visitors but everything seemed to have finally clicked for Kane Williamson s side on Day Three of the final Test versus India in a jam-packed Holkar stadium, Indore. Chasing a mammoth score of 557 for 5 by India, New Zealand were up for the fight, as they usually are, with a strong reply till lunch on Day Three. In fact, the opening stand between Tom Latham and Martin Guptill yielded 118. LIVE CRICKET SCORECARD: India vs New Zealand, 3rd Test

Out-of-form opener Guptill led from the front while his-form partner Latham was not far behind. Guptill looked confident and determined to make this innings count after a string of failures in this tour. He was playing with a calculative mindset after being dropped by Ajinkya Rahane; maybe prepping up for the upcoming mouth-watering ODIs, whereas Latham stood tall, nudging through the gaps and blocking anything that deemed respect. After two ordinary Tests it seemed they were applying themselves. For once they seemed in firm control.

While Guptill played straight down the track and timed the ball beautifully, Latham was cautious in approach. The pitch had no venom in it. The spinners were not getting any purchase. However, being the thinking cricketer that Ravichandran Ashwin is, he was turning the ball on a few occasions and rotating the seam to good effect. Ashwin was testing the patience of batsmen and playing with their minds. He was bowling outside off-stump and getting the occasional one close to the stumps to fox the batsmen.

Latham reached his third fifty of the series and also became the second player to notch up half-centuries in all three Tests of the series (after Rohit Sharma). However, trying to work one to square-leg, he got a top edge as the ball lobbed back to Ashwin. This, along with lunch break, triggered the collapse of a team who had done everything right till then. Suddenly from 125 for no loss, they were 148 for 5. Williamson, Luke Ronchi and Ross Taylor s dismissals again tilted the match in India s favour.

Ashwin s mastery followed by repeated mistakes: Williamson came to the crease after Guptill and Latham had brought up the first 100-run opening stand in the series. Latham had scored 53. Guptill looked set for their first hundred of the series.

Then Williamson was beautifully set up by Ashwin. Ashwin has the knack of dismissing the best batsman of the opposition. He did the same once again. Ashwin had already got rid of Williamson in the series opener by sharply spinning the ball. There was turn, but not enough to deceive a batsman of Williamson s calibre.

Ashwin knew he had to deceive Williamson with his guile. He started off with a length delivery, pushing Williamson back. He followed it up with a tossed-up delivery and a back-of-length delivery. The fourth ball stayed low. The trajectory was flatter. The penultimate delivery was again a dot. Ashwin had set up Williamson by then.

Ashwin emulated his first delivery a length-ball; Williamson was forced to go back. The sharp turn left him with very little time to bring his bat down at the right moment which dismantled his bails. With this, Ashwin dismissed Williamson for the fourth time in his career and third time in the ongoing series.

Next was Taylor, all at sea, and for some reason, not willing to play on the front foot despite the conditions. It is a shame that he keeps getting trapped in front of wicket or gets an edge with such consistency. He has been guilty of playing on the back-foot; this was injected once again in Indore. If one watches the visuals of Taylor s dismissals in this series, all look similar, which shows his unwillingness to adapt and learn. He edged one to slip to depart for 0.

Luke Ronchi was expected to hold his end the way he has done several times this series. Ashwin pushed him back before suddenly tossing one slightly up; it kissed Ronchi s willow, and Rahane completed a brilliant catch despite the ball bouncing off Wriddhiman Saha s pad.

New Zealand were hoping for a miracle to save them from further humiliation, but they lost Guptill after a straight drive touched Ashwin s fingers en route the stumps at the non-striker s end.

Jimmy Neesham was the only ray of hope for New Zealand, and he delivered with a fine 71 off 115 balls but lost partners in regular intervals. By now, New Zealand had gone back to their previous mistakes of throwing their wickets after brief periods. It was Ashwin s mastery, some soft dismissals and repeated ploys employed smartly by India to again have New Zealand on the mat.

What went wrong for New Zealand? They were up against a daunting score, but they were off to an excellent start. Unfortunately, the show belonged to Ashwin, who read the track well and played his cards smartly. He waited for the batsmen to lose patience and spun the odd ball. His partner Ravindra Jadeja chipped with valuable support. Nonetheless, New Zealand should be disappointed in repeating the same mistakes as their in-form batsmen threw their scalps without adding anything significant and some of them falling to similar dismissals.

The series looks set for a 3-0 scoreline in favour of India unless something dramatic happens. In Test matches, a small mistake or one session changes the complexion of the game, but similar mistakes, be it anywhere, cannot save a team from sliding down the ladder. Similar is the story of New Zealand but with one more innings to play, let us hope they sign off well. 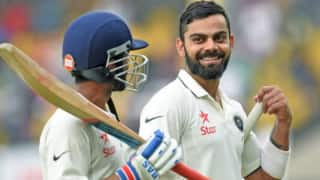