New Zealand sprang surprise once again in the ongoing five-match series, when they trumped India by a margin of 19 runs in the fourth match at Ranchi to level the affair 2-2.

New Zealand sprang surprise once again in the ongoing five-match series, when they trumped India by a margin of 19 runs in the fourth match at Ranchi to level the affair 2-2. New Zealand s win means the fifth and final ODI at Visakhapatnam will be the series decider. Chasing a target of 261 runs to win, none of the Indian batsmen could convert their starts into big scores and bat for long. India were bowled out for 241 in 48.4 overs. Ajinkya Rahane top-scored with 57, Virat Kohli scored 45 but no other batsman could make any mark while chasing a moderate target at the Jharkhand State Cricket Association (JSCA) Stadium in India captain MS Dhoni s hometown. FULL CRICKET SCORECARD: India vs New Zealand, 4th ODI at Ranchi

Once again, the New Zealand batsmen failed to bat as a unit, but their bowlers ensured that the game ended in their favour with Tim Southee leading the charge. The veteran seamer has now played crucial role in two of New Zealand s win in the ODI series, and one wonders what difference he would have made in the Test series. Southee returned with the figures of 3 for 40 in 9 overs. Martin Guptill top-scored for New Zealand with 72 runs, and for India, it was an ordinary day with the ball as their bowlers could not take all 10 wickets of a frail New Zealand batting.

Martin Guptill stands tall: Finally, it was a day to remember for the New Zealand ace batsman. After getting a few starts throughout the series, all that Guptill had to face was dismissals without making his mark. Even in the third ODI, the right-hander got to a rapid start but failed to notch up a big score. But on Wednesday, the Kiwi opener finally stood tall and delivered. Guptill faced 84 balls and scored 72 runs. His inning was decorated with as many as 12 boundaries, with each of them being hit as cleanly as he could hit. Guptill used the force as well as his technique to the optimum level, and picked up gaps really well to ensure that neither there was a poor start to his team s innings nor it was a sedate, cautious one. In the first 10 overs, New Zealand were 80 for no loss, thanks to a fine innings by the right-hander, who deserved a century at Ranchi.

Middle-order fails to make it big: New Zealand once again squandered a chance to put up a massive total, as their batsmen got starts but failed to convert them. Tom Latham was dismissed for 40-ball 39, which was studded with 4 boundaries, Kane Williamson fell for 59-ball 41 with 4 boundaries as well, and Ross Taylor remained confused about what could be the best possible batting approach in India. Taylor faced as many as 58 deliveries, hit 1 boundary and scored only 35. It was once again a disappointing show with the bat from the Kiwis, who continued to not bat as a unit and ended up posting a challenge which India could have easily conquered had one of their top-order batsman lasted for long.

Rohit Sharma fails, but Ajinkya Rahane delivers: Before this game, the pair of Rohit and Rahane had opened in 5 ODIs for India. Their highest opening stand has been 49 in the first ODI at Dharamsala, and they average around a lowly 29 as a pair. The trend continued at Ranchi on Wednesday, when Rohit was dismissed for 11 after hitting two fine boundaries. Rohit has had the scores of 14, 15, 13 and 11 so far in the series, and it is turning out to be a poor one for the Indian run-machine, who enjoys dominating in 50-over cricket. However, his partner, Rahane, who was running at high risk for not having good numbers in the ODI format did well to complete his 16th half-century. Rahane batted really well, but his innings was certainly not one of the most convincing ones as there were a few risky strokes. Rahane scored 57 off 70 balls, hitting 5 boundaries and a glorious six over cover.

Virat Kohli and MS Dhoni s wickets win New Zealand the game: For obvious reasons, the wickets of Kohli and Dhoni were the most crucial ones for the Kiwis. While Kohli resumed from where he left, the local boy could never really get going during his stay. Kohli scored 45 off 51 balls with 2 boundaries and 1 six, but it was Dhoni, who actually let down the home crowd. The dismissal of the Indian captain was most shocking. A regulation delivery from Jimmy Neesham found its way onto the leg-stump, going through a huge gap between Dhoni s bat and pad, and the wicket was knocked down. New Zealand were absolutely delighted having dismissed the two Indian batsmen, which in a way was as good as a win.

Tim Southee leads from the front: The ace bowler returned with the figures of 9-0-40-3, and played a key role in the New Zealand win. Southee accounted for the big wickets of Rohit, Pandey and Jadhav. Southee was once again at his best with the ball, maintaining tight line and lengths and providing enough variety in his bowling, including some off-spinning ones which kept the Indians tied up. 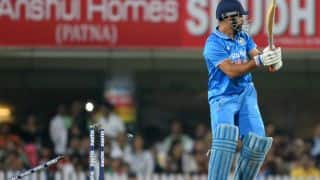 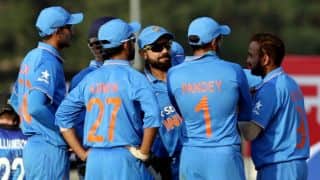