With the series tied at 2-2, India and New Zealand meet for the finale at Visakhapatnam on Saturday.

With the series tied at 2-2, India and New Zealand meet for the finale at Visakhapatnam. If India started the series on a winning note at Dharamsala, New Zealand came back hard at Ferozshah Kotla. It was again India who had the lead after the third One-Day International (ODI) at Mohali, but New Zealand clawed their way back to level the series at Ranchi. There has not been much of a difference between both teams as one has dominated at certain levels while the other has not gone done easily. This sets up a riveting clash between both sides for the fifth and final ODI. Here is a look at the key clashes between players from both dugouts which can give a better look into what lies in store for us on October 29, by Aditya Sahay: LIVE CRICKET SCORECARD: India vs New Zealand, 5th ODI at Vishakhapatnam

Martin Guptill vs Umesh Yadav: This series has shown how much Yadav has improved as a new-ball bowler. Yadav has pitched the balls in the right area, swung the white leather a bit and maintained a steady line without trying to do much at the beginning. More often than not, he has caught hold off a struggling Guptill against the new ball who seems in two minds whether to leave or play the deliveries poking outside off stump. The delivery to get rid of Guptill at Ferozshah Kotla can easily be the ball-of-the-series by Yadav. It was noticed in the last ODI as well how Guptill s partner, Tom Latham, was trying to face more deliveries from India s speedster to assist his unsure-opening partner.

This again sets a riveting battle between New Zealand s aggressive opener and India s frontline bowler. If Yadav does not get rid of last ODI s Man of the Match, early, he can make India pay by scoring big at VPCA stadium. In short, for Guptill, India will bank upon Yadav who feels confident in front of ICC Cricket World Cup 2015 s highest run-scorer.

Tom Latham vs Kedar Jadhav: New Zealand s best player on this tour, Latham, has been steady at the top for his side. It is pretty evident that he has learned the art of applying himself in the middle and grown from strength to strength in tough Indian conditions. On any pitch, Latham has stuck to basics and not played any rash shots in his long stays at the crease. Nonetheless, if not comfortable, Latham has been more cautious against spin which has led to his downfall. In the three innings he has been out, he has fallen prey to tweakers. With the pace of the ball reducing, he plays his shots too early or gets onto the back foot.

On the other hand, Jadhav has been India s go-to-bowler with regular breakthroughs in the middle overs. He has nothing to lose and with the captain backing him up, he is beaming in confidence. As a matter of fact, Jadhav has dismissed Latham twice which again sets up a mouth watering contest between India s part time spinner against New Zealand s best batsman.

Virat Kohli vs Tim Southee: Undoubtedly, this is the most vital clash from both the dugouts. This will ultimately decide the fate of the match, and now of the series as well. Kohli has been magnificent as always but Southee has also not disappointed with the ball. Every time Williamson has thrown the ball to the experienced campaigner, he has churned out vital scalps. Southee is accurate, has lots of variations up his sleeves and has a calm head on his shoulders. He will test a batsman of Kohli s caliber and if Kohli loses out, it will turn the match towards New Zealand. This can well be the mother of all clashes with potential of naming the winner of the series.

MS Dhoni vs Mitchell Santner: Now maybe people may not term this as a key battle but it has enough firepower to name which way the series will finally go. Santner may not have been among the highest wicket-takers from the series, but he has managed to apply the brakes on the Indian middle-order as seen in Ranchi. He was accurate and tossed up the ball by dropping off the pace which made things difficult for India s limited-overs skipper, Dhoni. With Dhoni having promoted himself to No. 4 and Santner coming in the middle overs, it will be another tough contest for Dhoni. If again Dhoni slows down and plays another rash shot as witnessed in his hometown, New Zealand will have their nose ahead.

Rohit Sharma vs his form: Scores of 15, 14, 13, 11 does not speak volumes about a star player like Rohit. Being the permanent opener of the team, it was expected from him to outclass the opponents at least once in the series so far. But sadly, it did not happen. Will Twitter s favourite child turn the heat on his opponents in the series finale? Well, India will be hoping for one big innings from the charismatic player to shun New Zealand out of contest. The only threat to Rohit is the batsman himself. His lackluster approach or unawareness of match situation gets him dismissed and hence Twitter erupts. If he wants to shut his critics and not give them any chance, then he will have to buck up and score big. This will be the best time for a Rohit Sharma-special. 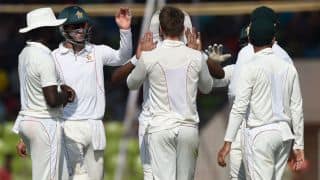