Here are the highlights of India's chase against New Zealand in ICC World T20 2016, Match 13 at Nagpur.

Nathan McCullum strikes early: Shikhar Dhawan had scored a nearly match-winning 73 not out a few days ago when India were chasing a massive 197 against South Africa in the warm-up match. This time, chasing 70 runs less, Dhawan missed a sweep shot against Nathan McCullum and was adjudged out LBW. India had lost a wicket off the fifth ball of their chase. It only went further downhill from there. Full Cricket Updates: India vs New Zealand, ICC World T20 2016, Match 13 at Nagpur

Mitchell Santner’s magical over: Mitchell Santner came on to bowl the third over of the innings. Rohit Sharma, who had scored an unbeaten 98 against West Indies a few days ago, stepped out off the second ball of the over and got done in by an absolute beauty. Rohit stepped out but the ball turned sharply and bounced past his outside edge. Rohit was stumped by a long way even though Luke Ronchi fumbled a bit. Suresh Raina came in and walked back 3 balls later after playing a nothing shot. India were 12 for 3 in the third over. READ: India vs New Zealand, ICC T20 World Cup 2016, Match 13 at Nagpur: Highlights of Black Caps’ innings

Virat Kohli’s brief ray of sunshine: Whenever India is in trouble, the man they look to for answers is Virat Kohli. In the face of extreme pressure, Kohli had guided India home against Pakistan. The same was expected this time around. While Kohli was clearly India’s best batsman on display along with MS Dhoni, even he could not rescue India this time. He batted well for his 27-ball 23, but edged Ish Sodhi behind to leave India in the depths at 39 for 5. READ: New Zealand spinners rip India apart by 47 runs in ICC World T20 2016, Match 13 at Nagpur

MS Dhoni plays a lone hand: Once Kohli was out it was a matter of when, not if, India would lose. Dhoni did his best to wage a lone battle but saw his teammates fall like ninepins as he is so used to watching. Only Ravichandran Ashwin hung around, and though the duo managed to take India past their lowest ever T20I score, India succumbed to an enormous defeat. Dhoni hit a four and a six to top-score for India with a run-a-ball 30.

The Black Caps spin India out: The first nine wickets New Zealand took came off the bowling of spinners. Had Adam Milne not played spoil-sport by taking the 10th wicket, it could have been a clean-sweep by the Kiwi spinners. McCullum started the slide and took two wickets, Santner ripped out the heart of India’s batting with four scalps, and Sodhi took three as well as the all-important wicket of Kohli. India ended up getting bowled out for just 79 and lost by a massive 47 wickets. 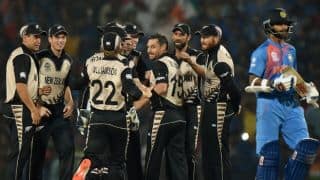