Every former cricketer has praised Virat Kohli and Kane Williamson being technically sound and consistent but this series will give a glimpse of how well they can match up with each other as a leader.

India and New Zealand are set to meet for a much-anticipated Test series in less than two weeks. With India riding high after beating the likes Sri Lanka, South Africa and West Indies, they will be up against a scrambling team after the retirement of Brendon McCullum, who sowed the seeds of this newly transformed New Zealand side. He gave them direction then, and it is now up to Kane Williamson and co. to take on a team who started their transition process probably a year before them. Virat Kohli’s India are favourites at home but still have certain issues to get sorted before tougher assignments. On the other hand, New Zealand have a humoungous task to match Indians in their den. Full Cricket Scorecard: India vs New Zealand 1st Test at Kanpur

With different agendas but same goal in the minds of two new captains, Kohli and Williamson, this makes up for a tough series, as it is a test of two new captains to showcase their skills as a leader. The cricketing world is always introduced to new sensations on the field in significant periods. If Kohli has been India’s new dawn in Indian cricket since late 2000s, Williamson has proved to be an astute reader who seems eager to make giant strides in international cricket since his arrival.

India’s poster boy and Test skipper Kohli came to international arena in 2008, debuting in the 50-over format. After a few setbacks and vital contributions, Kohli started making a strong mark. He is aggressive, not shy of taking equal participation in verbal spats and backed it up with match-winning knocks. Be it in Asia Cup 2012, tri-series in Australia 2011-12, ICC World WT20 2014 or WT20 2016, Border-Gavaskar Trophy 2014-15, Kohli has carried the burden of India’s batting with ease.

Connoisseurs of cricket have sweated a lot reading his mindset. He takes his training seriously and strives hard before every game. Kohli brings out the best while chasing, which shows his temperament to fight in precarious times. He is akin to an aggressive style of play. He wants to lead and take maximum responsibilities, carrying the torch of Indian cricket with pride. He has made it obvious that he plays for results rather than tame draws. Keeping in mind that India will be up against a tougher side in England, Kohli will not like to take New Zealand lightly.

Being a modern-day great, Kohli knows the risk of taking his opponents for granted. India are slowly but steadily becoming a tough outfit in Tests but have a long way to go before claiming the numero uno spot. Currently, they may be No. 2 in ICC Test rankings, but have a steep task attaining the top rank.

India have a good set of bowlers and with Kohli’s strategy, they push for wickets rather than containing. In the batting department, India have an inconsistent Shikhar Dhawan, erratic Rohit Sharma and a slightly bogged-down Cheteshwar Pujara. It is still not a settled line-up, and India will have to put this issue to rest. Seeing this, it will be interesting to see how Kohli holds up and where he comes to bat before thinking of making some bold declarations, if need be.

Talking about modern day’s greats, Williamson is another name who has done enough to acclaim the elite tag. He is a contrasting character as compared to Kohli. He is composed and seldom shows emotions. He has just started a new innings as Test captain in a recently concluded series against Zimbabwe. He also has dependable bowlers but his batting line-up causes some worries with Tom Latham, BJ Watling and Henry Nicholls being new to the conditions, whereas seniors like Ross Taylor and Martin Guptill are going through bad form as evident in the series against South Africa. Williamson resorted to horses-for-courses ploy in the ICC WT20 2016 but will have to come up with something new in Tests.

It will be interesting to see how Williamson makes this New Zealand team into a competitive lot playing against an exuberance Indian side. Williamson will be wary of Kohli’s charismatic nature and bold attitude. He knows what he will be up against but his task will be to prepare his troops in the same stead. The most riveting factor for both these equally established players will be to make their players play like they personally do. In short, Kohli and Williamson’s influential factor will be under scanner.

How nicely these two modern day gentlemen are able to hold their teams in pressure situations will be the key. Every former cricketer has praised Kohli and Williamson being technically sound and consistent but this series will give a glimpse of how well they can match up with each other as leaders. 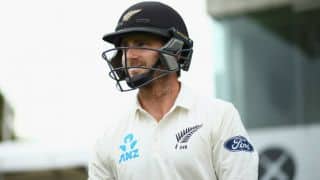