Just when the Kolkata crowd were about to mourn about not getting any India match...

India‘s passion for cricket needs no mention. Cricket runs through the veins of Indians. Wins can result in national holidays. Defeats have led to heart-attacks, and even suicides. While the entire country goes gaga about the sport, Bengal, or to be more specific, Kolkata, perhaps takes things a notch or two ahead. Kolkata has their two factors related to cricket that they can boast of: Sourav Ganguly and Eden Gardens. The city is passionate about sport, be it East Bengal-Mohun Bagan or cricket. Cricket can do miracles to the city. In fact, when Ganguly was dropped from the IPL team Kolkata Knight Riders, Kolkata was divided into cricket-lovers one routing for KKR (the Kolkata team) and for Pune Warriors India (where Ganguly eventually went to). Bengalis rose above their Bengali sentiment, which is what made them support Pune. The unity was broken, and cricket did that. READ: India vs Pakistan, ICC World T20 2016 match shifted to Kolkata from Dharamsala

Being the second-largest stadium in the world and the largest in India, Eden Gardens has been one of the premium venues for India. The Eden crowd is a hyper-passionate species that can burn down the stadium if India lose an important fixture such as the World Cup. They had resorted to violence after India’s unceremonious exit in World Cup 1996. During Pakistan’s visit to India in 1998-99, after Sachin Tendulkar’s controversial run out, the Eden Gardens crowd started throwing bottles, stones and everything at hand. In the end the policemen were compelled to vacate the ground. READ: ICC T20 World Cup 2016: Sympathise with Dharamsala, but happy India-Pak tie is with Eden, Sourav Ganguly

Despite these incidents, Eden Gardens maintained to host international matches. The ground has witnessed history unfold several times. The iconic Border-Gavaskar of 2000-01 that marked the rise of Harbhajan Singh and witnessed VVS Laxman’s 281 immediately comes to mind. However, the situation changed significantly after Ganguly’s retirement. Ganguly, almost a demigod for Kolkata cricket fans, left a hollow with his retirement. Following his exit from international cricket, Kolkata showed a prominent indifference towards cricket. With Jagmohan Dalmiya moving away from the limelight, Eden Gardens started getting fewer matches and eventually came the time when Eden was left out with no matches at all.

They missed Dada, yes. But they realised they miss live cricket as well. India were to host ICC Cricket World Cup 2011. Kolkata were assigned India vs against England. Ardent cricket-lovers of Kolkata started preparing before the groundsmen had. Students saved money by bits and pieces. Leave applications for February 27 turned up on desks. Then news broke out: as per ICC norms, the Eden Gardens officials had failed to meet the regulation standards for the match, which was shifted to M Chinnaswamy Stadium, Bengaluru. Rarely has Kolkata had a mass heartbreak so large.

Eden Gardens got three other matches — Ireland vs South Africa, Ireland vs Netherlands and Kenya vs Zimbabwe. Unfortunately, the matches were of little significance to the Kolkata crowd. Many critics went on to say that every match had equal importance considering the event, but the lack of an India match hurt the locals’ sentiments big time. India went on to win the World Cup that year, celebrations took place in Kolkata as well like all the other places in India, but Kolkata spectators remained deprived of the live action of their home side.

India again started getting ready for yet another ICC mega, this time for ICC World T20 2016. Another World Cup, to cut it short, but in T20 format. The Eden Gardens crowd again started expecting for one big India clash. They got the biggest match of the tournament, but were not allotted an India match.

People compared the scenario with the 2011 event, when Wankhede hosted the final and did not host an India match. But the truth remained that they got to host matches of significance.

Just when the Kolkata crowd were about to give up, as they would like to say, ‘karma played its role.’

Politics got into action and cricket was affected once again as the power-packed India vs Pakistan clash was to be rescheduled to some other stadium. Pakistan cricket administrators were keen about their players’ security and were not ready to play at Dharamsala following the threats sent out for the Pakistan players. India offered them Mohali and Eden Gardens. Pakistan accepted the latter.

The rest of India will call it a coincidence, but for the once-heartbroken Kolkatans, it is nothing karma, for Kolkatans love cricket, just like their stereotypical love for biryani and rosogolla. 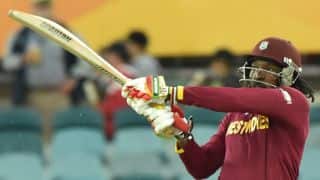