When Prasad’s aggression managed to pump adrenaline in a budding college student.

The memories of the SCG victory had started to fade when India played Pakistan for the second time in a World Cup at Chinnaswamy Stadium in a quarter-final on March 9, 1996. Abhishek Mukherjee looks back at the day when Venkatesh Prasad’s aggression managed to pump adrenaline in a budding college student.  India vs Pakistan Live Score

The euphoria of 1992 had ended with the clash at Sydeny Cricket Ground (SCG). India did not make it to the semi-finals. The next India-Pakistan World Cup clash came after what it felt like ages. By then I had made my way to college. My college had a “half-day” on Saturdays, but I stayed back at home, watching Sri Lanka vs England and waiting for the big clash. Stories on India vs Pakistan, Cricket World Cup clashes.

My mother was at school. My father usually slept in afternoons on weekends, but on this day he announced that he would watch the entire match and hollered at me whenever I tried to switch to DD 2 (does anyone even remember the channel?) to catch traces of Sanath Jayasuriya mauling England. PREVIEW: India vs Pakistan ICC Cricket World Cup 2015 Match at Adelaide

My brother was big enough to follow cricket by now, so it was an all-male viewership at our place till my mother returned at about six in the afternoon. I was on the floor yet again, leaned against the sofa, albeit without any algebra to accompany me this time.

The big surprise came when Aamer Sohail walked out to toss the coin with Mohammad Azharuddin. Wasim Akram was apparently injured and was ruled out of the match. He was supposed to be replaced by Ata-ur-Rehman; he was, to be very polite, not rated very highly, especially when he filled in the boots of a Wasim or a Waqar.

Sachin Tendulkar and Navjot Sidhu started off rather sedately. It was a breathless session of play as Waqar Younis and Aaqib Javed were negotiated, and when they were seen off, I thought Tendulkar would begin the onslaught. But we were left stunned: Tendulkar was bowled, in a cruel twist of fate, by, Ata-ur-would-you-believe-it-Rehman (did it really happen?).

This was followed by another subdued innings from Sanjay Manjrekar; Sidhu scored a well-compiled 93. It looked like a decent launching pad, but India had to capitalise on that. Both Azhar and Vinod Kambli had a few lusty blows, but neither lasted long. When Nayan Mongia joined them at the pavilion, Baba predicted something between 260 and 270. We agreed.

We were, to be honest, not prepared for Ajay Jadeja. No one was. Waqar was perhaps the least prepared. Forty runs were plundered off two overs, and the locals, Kumble and Srinath, hit a couple of boundaries each; India reached a massive (by 1996 standards) 287 for eight. To add to their injuries, Pakistan didn’t finish their overs in time, so they were docked an over.

288 off 49 overs seemed impossible. After all, they did not have a Jayasuriya.

But then, they had Saeed Anwar and Aamer Sohail, who started off as if they wanted to chase the target down in thirty overs. The first five overs went for what seemed like five hundred runs. With Venkatesh Prasad leaking 27 runs off two overs, Azhar did what all Indian captains in the 1990s and 2000s used to do under such circumstances: he brought on Anil Kumble.

Kumble did a decent job, but runs kept coming from the other end. Though Srinath got Anwar out, Sohail carried on, and Ijaz Ahmed looked like he was settling down. My mother was back by now, and her serene pessimism filled the room, giving me a feeling more sinking than before.

With the morbid fifteen overs out of the way, Azhar recalled Prasad. He was hit for a four by Sohail. The makeshift Pakistan captain made a gesture, asking the local hero to fetch the ball. He was bowled next ball. For the first time in his life, Prasad, the man who looked like Godzilla and bowled like Bambi, yelled back like a horrifying demon. As did I.

I punched the floor probably a million times till my knuckles got sore, and shouted till my voice gave in. I cannot remember a single other moment in the 1990s that had got me more ecstatic. My voice cracked, and remained hoarse for several days.

But Prasad had not finished. He kept bowling beautifully, and the runs dried up. Ijaz and Inzamam-ul-Haq both succumbed to the pressure, and suddenly Pakistan were reduced to 132 for four. This brought Javed Miandad to the crease to join Saleem Malik (my mother, acquiring all her pent-up pessimism, kept saying “this target is nothing for Miandad”).

Azhar brought on Tendulkar and Jadeja. Both men bowled accurately, choking up the experienced pair. Malik then played half-forward to Kumble, and got LBW (how many times has the great man got batsmen out thus?). Rashid Latif tried to catch up with the asking rate, hit a couple of sixes, and was stumped off Raju.

And then it happened. In what turned out to be his last international innings, Miandad was run out in a cruel, ridiculous mix-up with Waqar. As the stadium erupted, the television screen showed the great man walking back to the pavilion to traverse what seemed to be an endless distance. I stood up impulsively, and somehow amidst all the euphoria, I felt sad for the man I had loathed so much over the years.

Pakistan lost by 39 runs. I could not sleep till three in the morning.

Man of the match: Navjot Sidhu. 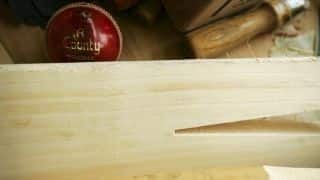