Pakistan will hope that they can restrict India in the match and register their first-ever win against their arch-rivals in World Cup events.

The much-awaited match of the ICC World T20 2016 between India and Pakistan finally arrived and the crowd was buzzing throughout the match. It was well attended by many celebrities from both India and Pakistan. India had won the toss and elected to bowl first and looking at how the pitch behaved, it seemed to be a sensible move. Pakistan dropped Imad Wasim and got in Mohammad Sami in his place. It looked like Pakistan were at a disadvantage as soon as the match began. Pramod Ananth brings you the highlights of this crucial match at Kolkata. LIVE CRICKET SCORECARD: India vs Pakistan, Group B Match 19 of ICC T20 World Cup at Eden Gardens

National Anthems: When India play Pakistan, the passion in both teams is heightened. To make things even more exciting, the National Anthems were sung by two celebrities. The Pakistan National Anthem was sung by Shafkat Amanat Ali Khan, while India’s was sung by the legendary actor Amitabh Bachchan. That set the tone for the match brilliantly. LIVE CRICKET UPDATES: India vs Pakistan, Group B Match 19 of ICC T20 World Cup at Eden Gardens

More turn than usual:  Ravichandran Ashwin got a lot of turn right from his first over of the match. Even Ravindra Jadeja, who is not known for pronounced turn, got the ball to turn viciously. There have been three matches in the last four days on the Eden Gardens pitch. It could perhaps be the fact that the pitch was perhaps tiring.

Hardik Pandya’s superb catch: Pakistan openers got off to a good start and were looking threatening, despite of the fact that their run-rate was under check. But Sharjeel Khan pulled the pulled the ball to long on, where Pandya charged in and took the catch diving forward. He seemed to have hurt himself and left the field for a brief period. But he then returned to bowl two overs and picked up a wicket, conceding 25 runs.

Pakistan’s clever batting order shuffle: After Sharjeel was dismissed, Shahid Afridi promorted himself up to No. 3 and he was followed by Umar Akmal at No. 4. Mohammad Hafeez and Shoaib Malik batted lower down the order. This was a positive move from the team and it paid off.

Shoaib Malik-Umar Akmal partnership: Malik and Akmal out on 41 off just 24 deliveries that helped Pakistan reach a competitive score. Akmal was dismissed by a clever delivery from Jadeja, who foxed him into a stumping. Malik too was back in the hut soon after that. 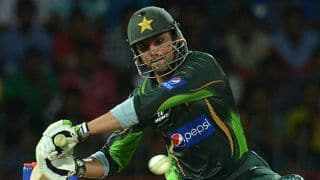