After all the hype surrounding the clash between two formidable teams India and South Africa, the first One-Day International (ODI) turned out to be a one-sided encounter. Abhijit Banare looks at the key moments of the match that India lost by 141 runs at Johannesburg.

After all the hype surrounding the clash between two formidable teams India and South Africa, the first One-Day International (ODI) turned out to be a one-sided  encounter. Abhijit Banare looks at the key moments of the match that India lost by 141 runs at Johannesburg.

The matured way in which the South African openers Quinton de Kock and Hashim Amla  set themselves at the top was delightful. Though South Africa managed to put up a century stand for the first wicket after a long time, Amla and de Kock looked like a fine pair. De Kock is an  aggressor while Amla anchors the innings. The manner in which de Kock and Amla went about shaping the innings was worth watching. After the initial blitz, when the runs dried up, they went about collecting singles and didn’t look under pressure. Even though  it was during the early stages of the game, but the 152-run stand did demoralise the Indians.

Mahendra Singh Dhoni’s comments about death bowling in post-match conferences these days indicate that he has given up. Before the start of the series he was hopeful that the situation might change considering the bowling-friendly conditions, but it has been the same old story.

India’s only positive outcome from the match was Mohammed Shami’s bowling, who was yet again accurate and had some impact on the batsmen. The difference in quality of the pace attack was visible when South Africa, with six pace bowlers had little trouble as they moved the ball at will. At the same time, the bounce  that the home side extracted consistently was also missing in India’s bowling. The commentators kept saying that the bowlers should not get carried away by the bounce on offer, and look to pitch it right, unfortunately for Indians neither of them was in place. Giving away as many as 135 runs in the last 10 overs was  far too expensive. Also, the credit goes to JP Duminy (59) and AB de Villiers (77) — who didn’t spare the Indian bowlers. However, the Indian bowlers will have to be blamed for dishing out a series of length balls and full-tosses.

The moment Rohit Sharma started leaving the swinging deliveries of Dale Steyn and looked clueless  the comparisons of being a Mohammad Hafeez-like bunny began  to crawl on social media. After a long time, he looked like Rohit from the past.  Having taken 16 deliveries to  connect the bat and the ball, Rohit was all at sea. Nevertheless, it also brought back memories of how he was hopping against the pacer in the 2012 edition of Indian Premier League (IPL) at Wankhede Stadium. Without much doubt Steyn relished the opportunity on both occasions. It was surprising to see someone like Rohit, high on confidence, getting into a shell.

If the death over bowling blew India’s chances, Rohit’s start further pushed them  away from the high-scoring chase. In comparison, Virat Kohli, who was equally struggling to hit his shots fluently kept the momentum going by attacking the bowlers. Similarly, Shikhar Dhawan too kept driving even when the ball was moving away from him while facing Lonwabo Tsotsobe. It’s better to play and get out rather wait for the chances for a long time in such a high-scoring game.

Though India didn’t lose too many wickets to short balls, but in this match, the discomfort against it  was visible. Dhawan in particular is showing some susceptibility as well. Even in the ODI series against the West Indies, he struggled against the lanky Jason Holder. Going  ahead in this short series, India will have to quickly rework and adapt to the pace and bounce. The going will only get  tougher as South Africa might bring in another quality fast bowler Vernon Philander for the remaining matches.

Not all 350 plus chases are cakewalks

At the end, under overseas conditions chasing a target in excess of 350 is surely not a cakewalk, even on a featherbed. The way the Indian bowlers were carted around, it seemed that the explosive batsmen can put up a fight like they have successfully done in big run-chases recently. But the pace and bounce caught them completely unaware.

Thanks to this being a curtailed three-match series, even before they could breathe comfortably, India are facing a must-win situation. There’s no doubt that the Men in Blue will be keen to forget this encounter, but they will be confident enough to not get bogged down by the dominating pacers. It will be an interesting clash in the second one-day game at Durban on Sunday. 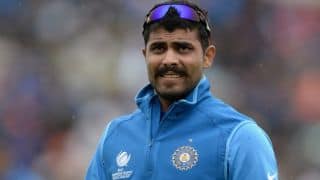 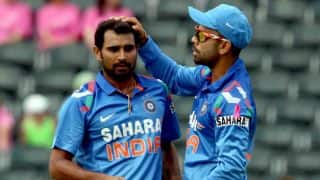