India face a monumental task of playing South Africa away in a Test series.

India face a monumental task of playing South Africa away in a Test series. While India are ranked No 2 in the world, their team is relatively young and quite inexperienced in Test cricket. South Africa are the No 1 side in Test cricket, and have a bunch of players who have been together for a long time. Shrikant Shankar feels that MS Dhoni’s team will face a real test of their skill and temperament in the two-match Test series.

The last time South Africa lost any Test series was in 2009 against Ricky Ponting’s Australia at home. Mitchell Johnson was at the peak of his bowling and batting powers at the time. The series ended 2-1 to the then world champions. Since then, South Africa have won seven and drawn six Test series. They are not Australia of the golden age, but they are the best team at the moment. Their batting and bowling line-up are by far the best in world cricket at the moment. They have always been a fantastic fielding side.

So, when MS Dhoni’s young Indian team take them on in the two-match Test series, one knows what lies in wait for them. The last time India toured the Rainbow Nation, they came away with a 1-1 series draw. But that Indian team had Sachin Tendulkar, VVS Laxman, Gautam Gambhir, Harbhajan Singh and Zaheer Khan in very good form. This Indian team is fairly inexperienced in Test cricket. Only Dhoni, Murali Vijay, Cheteshwar Pujara, Zaheer Khan and Ishant Sharma have the experience of playing a Test series in South Africa.

The conditions in South Africa suit pace bowling and the home team’s fast bowlers are the best in terms of an attacking combination. In Dale Steyn, Morne Morkel and Vernon Philander, South Africa have variety and wickets. If Dhoni wants tailor-made turners when foreign teams visit India, one can rest assured that Graeme Smith would want quick and bouncy tracks with a bit of movement on it. As much as the batsmen, the bowlers also have to adapt to the conditions and find their length right quickly.

South Africa also have four world class batsmen. Smith, Jacques Kallis, Hashim Amla and AB de Villiers are as good and as effective as the former ‘Fab Four’ of Indian cricket. They have got runs in all corners of the world and they all are in great form. It is seldom that all of them fail in any one Test match. Part of the reason they have not lost a Test series in more than four and a half years is because their batting is really good. And one cannot rule out their other batsmen as they contribute in important runs when needed.

India’s batting may have some new faces in Test cricket, but it has the ability to cope, given time. It is the bowling however, that faces a real stern Test. This is a side that has struggled to bowl out oppositions in the past and especially away from home. Ravichandran Ashwin still has to prove his worth as a spinner in Tests away from home, and India cannot always rely on Zaheer. He may get the better of his bunny [Smith], but his record against the others is not noteworthy. But then again, he is India’s best bowler. Ishant, Mohammed Shami and Umesh Yadav will get something out of the surface, but they need to with a lot of zip and effort to trouble the strong South African batting line-up.

India have lost their last eight away Test matches. They need to get back to winning ways, but without any practice match ahead of the first Test in Johannesburg, it is difficult to see how they will put up a strong fight. South Africa have always been notoriously strong starters against India. But they also tend to lose their bearings later in the series. So India have to be ready to take advantage when the opportunity presents itself. But make no mistake, India face the severest of tests of their skill and temperament in this Test series. 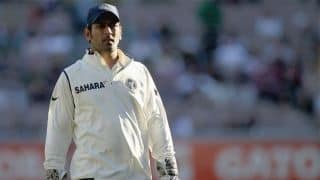