Ravichandran Ashwin remained the highest wicket-taker from either of the sides with 31 wickets, followed by Ravindra Jadeja with 23.

The four-match Test series for the Gandhi-Mandela Trophy between India and South Africa did not prove to be a lame run-fest as the limited-overs series were, even though they were marred with controversies surrounding the pitches. India prepared rank-turners on more than one occasion, and when the pitch at Bengaluru looked like it would support both the batsmen and the bowlers, rain played the spoilsport. Indian spinners were at their ruthless best, and the South Africans, despite having enough bowlers who could do the damage, did not find the same rhythm as their hosts. Ajinkya Rahane had a poor run in the first three Tests — scoring only 39 runs — but he ended the four-match series as the only batsman from either of India and South African teams to have scored a century. Rahane’s achievements in the final Tests of twin centuries speak volumes about how dominant the bowlers were in this four-Test series.  Full Cricket Scorecard: India vs South Africa 2015 4th Test at Delhi

Ravichandran Ashwin remained the highest wicket-taker from either of the sides with 31 wickets, followed by Ravindra Jadeja with 23. The South Africans, Simon Harmer and Imran Tahir, took one more than Jadeja combined. And perhaps this was the reason for the score line being 3-0 against South Africa.  ALSO READ: Top 5 knocks in the India-South Africa Test series 2015-16

International cricket in India is generally replete with runs, but this time around in the Gandhi-Mandela Series 2015, it were the bowlers who made merry. There were many spells from Indians that were noteworthy, but the South Africans did not miss out to spark with their bowling performances, even though they were sporadic, or came at a time when they had already lost the plot.

While Ashwin was the leading wicket-taker of the series, this list also takes in to account the other men who shone for their sides at different places. Let us take a look at the top spells from the India versus South Africa Test series 2015:

Dean Elgar’s four-wicket haul in first innings, Mohali Test: Indian batsmen’s struggle against spin was evident once again as out of the blue, on the first day of the series; they were shot out for a paltry 201, thanks to Elgar. The opening batsman was never expected to make an impact as strong as he made in the first innings with the ball. Not sure what Hashim Amla saw more in him than the specialist Imran Tahir, as Elgar bowled ahead of the right-arm spinner. Elgar accounted for Cheteshwar Pujara, Ajinkya Rahane, Wriddhiman Saha and Amit Mishra.

Ravindra Jadeja’s five-for in second innings, Mohali Test: After routing the South Africans for 184, India managed to set a 218-run target. South Africa made a horrendous start when they sent in Vernon Philander to open, and the lower-order batsman— for the first time in his career — was dismissed in fourth innings. Philander’s dismissal opened the floodgates; Amla had a brain-freeze that saw him leaving a straight ball angled into the stumps, and South Africa were reduced to 10 for 3. There was no way South Africa could have avoided the defeat, and Jadeja returned with the figures of 11.5-4-21-5. ALSO READ — Ravichandran Ashwin and Ravindra Jadeja: How good have they been against South Africa, and in their careers?

Morne Morkel’s six wickets in third Test at Nagpur: The wicket at Nagpur was the one that copped most criticism, the pitch was dry, the ball turned square right from the first session. The International Cricket Council (ICC) termed it “poor”, after all, the ball ‘favoured’ a certain kind of bowlers right from the first session. India vs South Africa 2015 Test series: Marks out of 10 for Proteas

Dale Steyn was missing the Test and it was time for Morne Morkel to step up and do what his bowling partner did at the same venue in 2010. Morkel bowled his heart out: he troubled the best of the batsmen (Murali Vijay). Vijay was even hit on the arm guard in Morkel’s second over. Morkel’s pace was as high as 140 kmph, and he ended the innings with 16.1-7-35-3, and in the second innings, he had the figures of 10-5-19-3. He also bowled pretty well in the second innings of the Nagpur Test.

Ravichandran Ashwin 7 for 66 in second innings of Nagpur Test: Ashwin had already claimed 5 for 32 in the first essay, but he was far from satisfied on a pitch that was tailor-made for spinners. Ashwin was vicious, the ball turned sharply, and the variation that the ace Indian spinner bowled with was a tough ask for the South Africans. The tourists were already under tremendous pressure having been shot out for 79 in the first innings, and Ashwinand company did not let them get away. He went on to register his best bowling figures in First-Class cricket. India vs South Africa 2015, Test series: Marks out of 10 for the hosts

Kyle Abbott’s five-for in first innings of Delhi Test: The South Africans made a few changes to their bowling attack, given that series was already gone. Marchant de Lange did not get a chance, but Abbott played in the game ahead of Kagiso Rabada and made most of the opportunity. On a wicket that was good for batting, Abbott returned with the figures of 24.5-7-40-5. He accounted for Cheteshwar Pujara — once again the right-hander falling on a delivery with a gap between bat and pads — Saha, Jadeja, Ashwin and Ishant Sharma. Abbott was disciplined, his line and length was probing and there was consistency, which was encouraging to see.

Ravindra Jadeja’s 5 for 30 in second innings of Delhi Test: After India posted 334, it was expected that South Africa will play with lot more freedom since the series was already lost. The pitch was a lot better for batting but the story was the same as the tourists were shot out for 121, with Jadeja accounting for three men — Amla, Faf du Plessis and AB de Villiers — who went on to become a thorn in India’s flesh in the second innings. 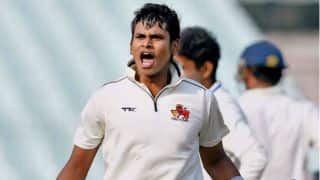