India vs South Africa 2015: Host’s likely XI for the 1st Test at Mohali

India vs South Africa 2015: Host’s likely XI for the 1st Test at Mohali

Considering the team management’s faith in Rohit Sharma and his recent form, he is likely to make the cut ahead of the Cheteshwar Pujara.

The ongoing South Africa tour of India has so far gone the visitor’s way. It’s not often that India find themselves in such situations in home series but the world-class South African side have got the better of them so far. Having won the Twenty20 International (T20I) and the One-Day International (ODI) series, the Proteas now will eye the four-Test series. However, this format is going to be a completely different challenge. India, under their new captain Virat Kohli, have recently won a series in Sri Lanka and the confidence will surely be sky-high. On the other hand, the South Africans, the No. 1 ranked Test side, face a daunting challenge of negotiating the strong Indian spin attack. Ahead of the first Test at Mohali, starting Thursday, Suvajit Mustafi looks at the likely Indian XI. LIVE CRICKET SCORECARD: India vs South Africa 2015, 1st Test at Mohali

Top-order: With Murali Vijay and Shikhar Dhawan both fit, they walk into the side. KL Rahul, who has been inconsistent, has to be left out. Vijay has been one of India’s best batsmen in recent times and though there maybe some questions asked on Dhawan’s form, one must not forget that he has got two hundreds in his last two Tests.

Dhawan didn’t get going in the ODI series and that did hurt India, but he is most likely to play. Considering the fact that Cheteshwar Pujara, as opener, carried his bat with a match-winning hundred in the last Test in Sri Lanka, gives team management the option of trying out Pujara and Vijay as openers but that may not be the case. India vs South Africa 2015, 1st Test at Mohali: Virat Kohli vs Imran Tahir, AB de Villiers vs Ravichandran Ashwin, and other key battles

Pujara isn’t even certain for the No.3 spot. It is clear that the Ravi Shastri-Kohli combo have put more faith in Rohit Sharma, especially with the kind of form the latter has displayed so far over the past month. It is unlikely that he will be kept out. The fact that Pujara has not got going in the Ranji Trophy will also give Rohit the edge.

If Rohit plays then Pujara, who has a much better Test record (Test average touching 50) will have to make way and Ajinkya Rahane will be steadying the ship at No. 3.

Middle-order: Kohli has made the No. 4 spot his own ever since the retirement of Sachin Tendulkar. If Rohit plays, No. 5 is the spot for him, and he will look forward to justify it.

With India playing one less batsman to strengthen their bowling, No. 6 will be wicketkeeper Wriddhiman Saha. The keeper-batsman scored two crucial fifties in Sri Lanka; apart from being an excellent gloveman, he is more than handy with the bat and his First-Class average of close to 45 is a testimony to that. India vs South Africa 2015: Ravindra Jadeja, Ajinkya Rahane and other Indian players to watch out for

All-rounders and bowlers: He is man with three First-Class triple hundreds to his name, so he can definitely bat. Yes, Ravindra Jadeja is likely to make his Test comeback and why not? Hasn’t he been in a phenomenal form? With 38 wickets and 3 fifties from his 4 Ranji Trophy games this season, Jadeja is expected to be the No. 7 and the side will also rely much on his left-arm spin.

Ravichandran Ashwin has been declared fit and he will be India’s strike bowler. The off-spinner, who won the Player of the Series in Sri Lanka, also has two Test hundreds to his name. With him at No. 8, the batting looks further stronger.

Spin is India’s strength and the side is expected to play three spinners so leg-spinner will make it. Amit Mishra was outstanding in Sri Lanka; his presence also gives variety to the Indian spin attack — off-spin, left-arm spin and leg-spin. Mishra will be at No.9; in Sri Lanka he scored runs at over 26.

In Ishant Sharma’s absence, recent Ranji centurion and India’s second-best strike bowler Umesh Yadav will lead the pace attack. Varun Aaron is likely to partner him ahead of Bhuvneshwar Kumar. In the past Kohli has preferred Aaron ahead of Bhuvneshwar because the Jharkhand bowler, despite his wayward line and length, brings extra pace on the table.

Summary: India are likely to go with five specialist batsmen, the wicketkeeper, three spinners and two fast bowlers. The batting will be boosted with the capable likes of Saha, Jadeja, Ashwin and Mishra in the lower middle order. Despite a brilliant hundred in his last Test, it will be unfortunate if Pujara sits out. Considering the team management’s faith in Rohit and the latter’s recent form, he is likely to make the cut ahead of the Saurashtra batsman. 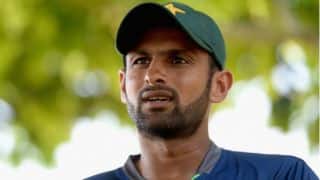