India ended South Africa‘s unbeaten winning streak (17) at home, courtesy a 6-wicket win in the series opener of the six-ODI series. With regular skipper Faf du Plessis and South Africa’s best batsman AB de Villiers out of action, India start the second ODI as favourites. Will India’s wrist spinners continue to halt South Africa’s progress in middle overs? Who will rise to the occasion in absence of Faf and de Villiers? The stand-in skipper is Aiden Markram. From India’s perspective, the onus will fall on the lower middle order. Let us walk through the possible key battles to take place in the second ODI at Centurion.

It isn’t an unknown fact that Rohit is a tentative starter versus spinners. Out of 31 dismissals versus spin, Rohit’s stumps have been rattled seven times (22.6 per cent). It won’t be an out-of-the-box strategy from South Africa to unleash Imran Tahir, the No. 1 ODI bowler. He will pose a threat to the right-hander. If Rohit falls early, it will surely add more pressure on Virat Kohli.

Note: Currently in the situation South Africa find themselves in, they have to play fearlessly and bring in unorthodox ploys.

Dhoni would be up against Kagiso Rabada. Though Rabada was a total failure in the first ODI, he would be eager to bounce back. The Kanpur ODI (India-South Africa first ODI in 2015) would be on the youngster’s mind when he bowls to Dhoni. He was immensely successful against the right-hander courtesy wide yorkers and full-length deliveries.

Miller averages 38.75. It drops to 14.5 versus spin bowlers. With de Villiers and du Plessis out of action, Miller will have to fill in huge shoes. Chahal and Yadav’s tendency to flight the ball will surely tempt a big-hitter like Miller. If he plays his natural game, it may backfire once he perishes. On the other hand, if he sticks back and plays rather defensively, he would go into a shell. It is a tough job ahead for the left-hander.

De Kock looked completely clueless in the Test series. While he commenced the ODI series opener with confidence, he perished off Chahal. He isn’t the most fluent against slower bowlers, but there is a catch when he is up against Bumrah. De Kock has a tendency to close the face of the bat, whereas Bumrah angles it away from the batsman. There are chances of de Kock producing a leading edge.

Currently, India are in an advantageous position courtesy de Villiers-Faf’s absence and a 1-0 lead. It will be an interesting battle between India’s well-oiled side and South Africa’s inexperience coming into play in home conditions. 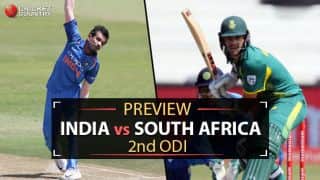