In the last over before lunch, Virat Kohli flicked the ball on the leg-side. He asked Ishant if he could emulate the shot. Ishant Sharma said he will take care of that after the break.

India were in a good position, but they threw it away. It was the same old story. First it was Hardik Pandya’s run out and then Parthiv Patel left one while wicketkeeping instead of batting to add to India’s miseries. Although Virat Kohli’s 153 remains the highlight of the day, there were events that kept us hooked to the game on Day Three of the second Test at Centurion.

India were 183 for 5 when the play resumed. At the crease were Kohli and Pandya to take India out of trouble. However, Pandya’s sleepwalking cost India the momentum they were yearning for. He reached the crease but had forgotten to ground the bat, thinking that the ball will not be thrown at his end. Vernon Philander hit the timber.

Sunil Gavaskar called the blunder as unforgivable during commentary.

Ravichandran Ashwin comes to bat and the track looks batting-friendly. The ball still swings, but there is something about his batting. He bats as if the bowlers had been taken to the cleaners all day.

Ashwin scored a resolute 38 off 54, adding 71 runs with Kohli for the seventh wicket. He, thereby, scored 53.5 per cent of runs in the partnership.

Kohli dissected the narrowest of gaps on the off-side. It was his trademark cover-drive that painted the Centurion with beauty. Although India were still facing adversity, Kohli enjoyed the moment anyway. He fist-pumped Ishant Sharma, celebrating his strokeplay.

In the last over before lunch, Kohli flicked the ball on the leg-side. He asked Ishant if he could emulate the shot. Ishant said he will take care of that after the break.

Before that Kohli had reached his 21st hundred and after that he equalled Don Bradman’s record of most 150-plus scores as captain. It was just another day for him. These are #JustKohliThings, you know.

Amidst all this, here’s how Kohli and Pandya tackled reverse-swing.

Parthiv poked an away-seamer in the first innings, edging it to the wicketkeeper. Before that he had already dropped two catches.

On Day Three, Parthiv left the ball when he should not have. He blamed Cheteshwar Pujara, at first slip, for not having a go at it, but the replay confirmed that it was Parthiv’s catch to grab.

Jasprit Bumrah removed Aiden Markram and Hashim Amla for 2 runs. In came AB de Villiers and batted as if South Africa were in a strong position. The counterattack fetched him 50* off 78, while Dean Elgar, thanks to Parthiv’s relinquish, is unbeaten on 36. 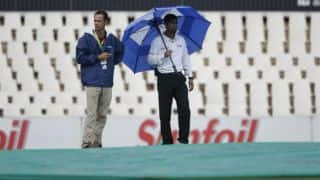