What is surprising is that the cricket authorities choose to ignore critical information.

Once again, millions of cricket fans sat in frustration as bad light ended the first day of the second Test between India and South Africa early and incessant drizzle delayed the start of the second day’s play at Durban. Arunabha Sengupta looks at the weather records and wonders why Test matches are scheduled in the city at this time of the year.

“I do think that, of all the silly, irritating tomfoolishness by which we are plagued, this weather-forecast fraud is about the most aggravating. It forecasts precisely what happened yesterday or the day before, and precisely the opposite of what is going to happen to-day.” – Jerome K Jerome.

Some decades earlier, we did use to tune into the weather forecast bulletins, hear sombre predictions about expected cloudy skies, thundershowers, smile knowingly and reach for our sunscreens and dark glasses.

But times have changed drastically since then – even more significantly since Jerome K Jerome wrote those immortal lines in Three Men in a Boat.

Meteorologists have markedly improved the accuracy of their predictions. Radar and satellite technology have advanced by leaps and bounds. Four day forecasts are increasingly accurate today and most of it can be found online. Even extended predictions can be made with startling degrees of accuracy.

And every forecast of the short or long time range did ring warning bells about rain and bad light in Durban during the scheduled Test match.

One does not even have to talk about the accuracy of predictions. Historical data have for long been available in this field– and have been used as almanacs for planning and decision making since time immemorial.

The need to make a trip to the meteorological office also does not arise. Even Tripadvisor.com informs us that the rainy season in Durban starts late in November, continues through December and extends into January.

Websites that the cautious travellers refer to while planning their holidays are full of such guiding information. They inform us unequivocally that Durban has around 118 mm of precipitation in December, which makes it one of the wettest months of the year.

The sites also tell us that on an average, Durban experiences 20 days of rain in December. That makes the probability of getting five consecutive days of uninterrupted play very, very low.

The tourism sites and travel guidebooks  do another great job while estimating the hours of sun that the city may experience in a December day. After all, when one is out sightseeing, cloudy skies, poor visibility and early sunset can be real spoilers. And the travel books and sites inform us that during December, Durban gets around six hours of sun per day. Cricket matches need more than seven hours of sun per day.

What is surprising is that the cricket authorities choose to ignore such information. Darkness as one lies on the Suncoast beach can be irritating, but the same as one squares up to a Dale Steyn delivery. Rain can be a bother for the traveller, but a showstopper for a Test match.

One need not look at the weather archives either. A cursory glance at Wisden would also tell us that Durban is not the ideal venue for Test matches in December. Since 2003, the current India South Africa encounter is the eighth Test match that is being played at Kingsmead in the last month of the year. Without exception, every Test has been interrupted by rain or bad light.

One wonders why? In the days when every bit of cutting-edge technology is being used in the game, where team strategies, umpiring decisions, fitness regimes are regulated by the latest scientific advances, why is something as age old as weather prediction left casually in the heartless hands of the gods of chance?

A Test match between two top cricketing nations that attracts so much hype and attention is associated with a lot of stake. It deals with people scheduling their holiday plans around the game, moulding their social lives to centre around this sporting mega-event – some of that involves booking tickets and flights, get-togethers, cancelling and postponing pressing engagements. It is always a shame if such elaborate preparation and anticipation ends up in a damp squib because of pathetic medieval scheduling. 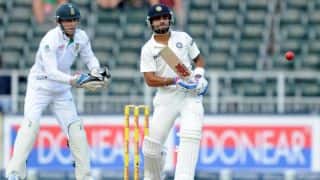 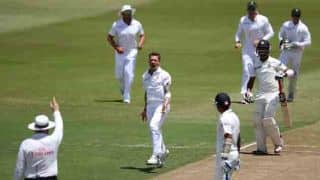