0 instance of India winning 3 consecutive ODIs against South Africa on South African soil. They had won at Johannesburg and Cape Town in 2010-11 and emulated that in the ongoing series. They now have a chance to better that.

0.33 India s win-loss ratio against South Africa in South Africa (7 wins, 21 defeats), their 2nd-worst against any country at their den with a 5-ODI cut-off. However, they have done a decent job against other countries there, winning 12 and losing 5.

1 dismissal needed by MS Dhoni (294 catches, 105 stumpings) to become the 4th cricketer after Kumar Sangakkara, Adam Gilchrist, and Mark Boucher to the 400-dismissal mark. Of these, 3 catches and 3 stumpings have come for Asia XI.

1 catch needed by David Miller to reach the 50-catch mark. He will become the 12th South African and 110th overall non-wicketkeeper to the landmark.

1 catch needed by Virat Kohli (14) to reach the 3rd spot among non-wicketkeepers for most catches in India-South Africa ODIs. Kohli will go past Jonty Rhodes. The list is led by Graeme Smith (19), followed by Rahul Dravid (17). 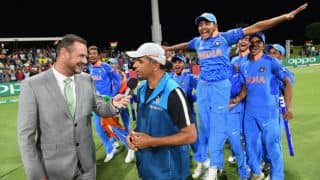